Last week was the 103rd Chelsea Flower Show – it was, of course, sublime in particular an amazing garden designed by Dan Pearson and based on the rockery at Chatsworth House in Derbyshire. It won best in show which was interesting for two reasons: firstly because it was not really a garden in the conventional perception of the word and secondly because is contained Rhododendrons.

Over the past century the show has changed a lot, there was a time, not that many years ago, when there were no modernist meadows at the Chelsea Flower Show. The drifts of herbaceous planting around cooly trickling stainless steel water features were not even a glimmer in the eye of the designer: in fact the concept of a garden designer was a pretty odd idea. Instead the show was dominated by conifers, rockeries and Rhododendrons. The great nurseries wheeled out new cultivars arranged around big lumps of rock: and very effective they were, in their way. The flowers were cheery and, as you can see if you watch old Pathe News Reels, perfectly matched the hats of the visiting Royals and other important people.

Then, sometime in the eighties the Rhododendron (and her cousin the Azalea) began to lose her appeal. Along with shoulder pads and the work of Pat Benatar their popularity waned. It was decreed that no longer did people want displays of short lived, often garish, colour in early summer followed by months of slightly dreary evergreen foliage. They discovered the delights of grasses and massed perennials and began to think of the nature as a friend rather than something that needed to be sprayed into cowed submission. It just shows that gardeners are by no means immune from the fickleness of fashion. The Rhododendron got a reputation as something of a relic and faded into the background of popular consciousness.

So what is the problem apart from a certain fustiness of image?

When, in Victorian times, the intrepid planthunters first returned from China bearing these exotic looking brightly flowering plants, everybody wanted to grow them. Those who lived in the right places planted them and many still thrive and give great pleasure. Other, less geographically favoured but socially aware landowners wishing to impress their neighbours employed teams of sturdy backed gardeners to excavate tons of soil which were then replaced with carts of acid soil imported from other parts of the country – one great garden owner built a railway into his garden so that soil could be delivered by the trainload. Rhododendrons were then planted and flourished contentedly for a while. Sadly the attempts of man to fiddle with nature will never last and although they may not die immediately, they will just sit there looking sickly and disgruntled. The leaves will go yellow, they will not grow and there will be no flowers. They will sulk like a bellboy denied a tip or a toddler a second chocolate finger. Let that be a lesson to all who dream of meddling with the natural order of things!

That said, if you are in the right place then it would be a crying shame if you did not find space in your gardens for a Rhododendron. For inspiration there are lots of magnificent collections dotted around the country. The Rhododendron, in the right place, is a fabulous shrub. It has drama, a dreamy scent and a selection of colours from white through mauve to the darkest claret red. It is tough and resilient and many species have very lovely bark and a dusty cinnamon underside to the leaves (formed of fine hairs called Indumentum).

It’s reputation as a one shot wonder is also incorrect as there are Rhododendrons that flower in almost every month of the year – or example R.lutescens which flowers from January to Midsummer or R.Polar Bear which flowers as late as September. The plants can vary in bulk from the size of a large caravan to a small shrub suitable for the tiniest of town gardens. The leaves can be extraordinarily spectacular -species like R.basilicum has enormous leaves arranged like a particularly extravagant Elizabethan ruff around the flower trusses. These can be seriously good additions to your garden and it is a huge mistake to dismiss them just because they are deemed unfashionable at the moment.

If you feel that without acid loving plants your life is incomplete even though your treasured Rhododendron is slowly choking to death in your limey soil then there is a very simple solution. Buy a large pot and a sack of Ericaceous compost: water using only rainwater and steer clear of unsuitable fertilizers. That way you will be able to have your Azalea and never lose it: either that or plan a move to Scotland or Chatsworth. 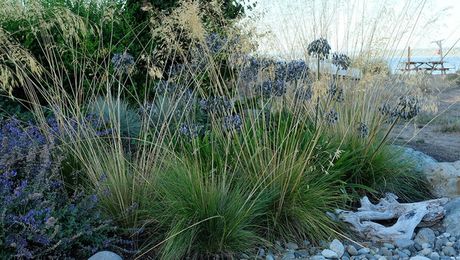 3 Great Heat-Tolerant Grasses for the Northwest

When sitting outside in summer, I often appreciate the grasses planted in my garden. I fell in love with grasses several years ago and enjoy adding them to perennial and… 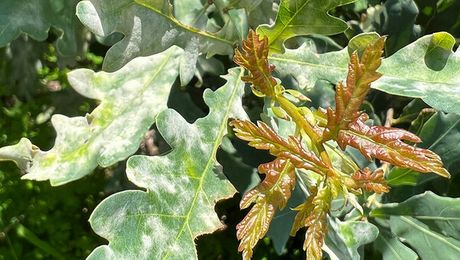 Managing Powdery Mildew in the Southeast

Powdery mildew can show up in a variety of plants in the Southeast, including trees, shrubs, perennials, and vegetables. The high humidity that we experience in the Southeast provides just…