Allium: An Onion by Any Other Name

At this time of year my garden is bouncing with Alliums however, it should never be forgotten that no matter how captivating, how elegant, how perfectly globular the flowers may be an Allium (in any form) is essentially an onion that has done terribly well for itself. This is apparent in the slight garlicky whiff, the fleshy stems and the occasionally rather lank leaves.

As a family the Allium has a lot going for it: there are about 700 varieties all of them hardy in Britain. They vary in colour from white, through yellow and sky blue to deep claret and bold mauve and there is a least one member of the family in flower from May until September. There are tall ones and short ones; single flowered and multi headed; bulbous and herbaceous and – most importantly – they all combine wonderfully with many other plants and add a different dimension to planting schemes. Of course onions and leeks will also look spectacular if allowed to flower but that rather precludes the all important eating bit so it is better to concentrate on the ornamental varieties – although the gap is neatly bridged by Allium schoenoprasum which as well as making an excellent edging plant are more commonly known as chives. 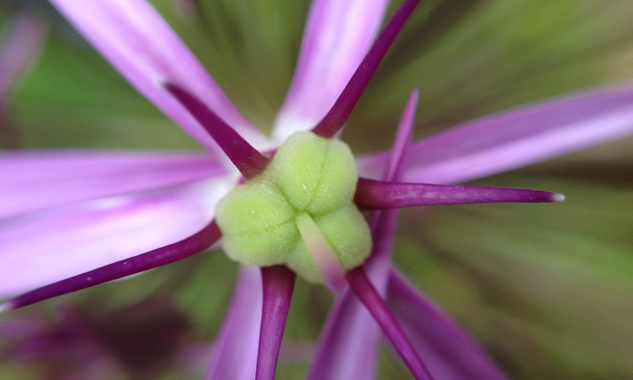 Most of my Alliums are A.hollandicum, – along with it’s best cultivar Purple Sensation. The flower begins as a tight onion domed bud  before opening into a purply mauve sphere the size of a tennis ball made up of hundreds of perfectly interlocking star shaped flowers that stand shoulder to shoulder like a wall of defensive shields. The stem is sturdy and upright and remains so as the flowers turn from green berries to black seeds and the whole structure fades into a perfect translucent skeleton.  To be honest the only drawback with this variety are the leaves which are rather withered and exhausted – however, as the Allium is much happier among company then the surrounding companion plants should conceal this minor deformity.

The even better news is that there are loads of other Alliums whose behaviour is just as exemplary. In the early summer (around May) the hollandicum is preceded by Allium Karataviense which has shorter stem with a more diluted purply pink flower – it’s unique selling point is that it has marvelous deep reddish-green leaves that are quite a spectacle in themselves.

Soon after that we wander into the Allium equivalent of Gulliver’s Brobdinag; some of these plants are so enormous that is difficult to believe that a medium sized bulb can store so much energy and potential. Allium giganteum is about four feet tall with wonderful 6’ diameter flowers.

Allium Gladiator is even taller and will top five feet in good conditions and has the advantage of a stronger purple that tangos energetically with orange Geums or blue geraniums.

Allium Globemaster which is more violet in colour – I have it next to a clipped yew and the contrast between the deep green gravitas of the Taxus and the rather silly bouncing ball of the Allium is truly delightful.

In late June the big-heads arrive: Allium christophii has an eight inch flower consisting of almost silvery star shaped flowers – much more separate and distinct than many of the others. Even more extraordinary is Allium schubertii which is a short stumpy plant with a flower head that looks like a surrealist sputnik about the size of a rolled armadillo. The pinkish flowers all stick out on stiff stalks (or pedicels for the botanically correct) of differing heights which give it a much more open appearance.

This, and most other Alliums, will dry very well and last for ages in flower arrangements.

Come July the show is still not over and after a solo turn by Allium nigrum (white flowers with black centres – hence the name) we have Allium sphaerocephalon with flower-heads the size and shape of a small boiled egg which begin frog green and open ruby red and Allium caeruleum which is the only blue member of the family.

And there we rest – but the ghostly skeletons still remain and underground the bulbs themselves are swelling and planning the following spring.

The Allium scores maximum points for colour, shape, ease of cultivation (dig hole, place bulb in hole, wait), unfussiness of habit, longevity and general joie de vivre. There will always be a place in every garden for a posh onion.