One of my longtime favorite garden plants is lavender mist meadow rue. I love its dainty flowers and long-blooming nature, not to mention the fact that its handsome foliage remains attractive throughout the growing season. But lavender mist’s best attribute might be its graceful movement in the garden, due to its ferny leaves and nodding flowers that float and flutter like butterflies above the plant. And despite their delicate appearance, most meadow rues (Thalictrum spp. and cvs., USDA Hardiness Zones 3–9) are fairly rugged plants.

In the 1990s, I got the chance to evaluate a number of wild meadow rues at the Chicago Botanic Garden, and I learned something important: While their foliage is almost always attractive, some have flowers that are not the least bit orna­mental. This first venture into the world of meadow rues kindled my curiosity about the other types out there, so I started a new trial. My staff and I ultimately evaluated every meadow rue on the market that we could get our hands on. Here are the ones that rose to the top.

What to expect from meadow rues

They’re part of a diverse family

Meadow rues are a member of the buttercup family. I’m fascinated by the floral diversity within this group, from the simplicity of a windflower blossom (Anemone blanda and cvs., Zones 4–8) to the distinctiveness of a monkshood flower (Aconitum spp. and cvs., Zones 3–8). Rather than true petals, like a rose has, buttercups commonly feature petal-like sepals and conspicuous clusters of stamens, giving them a unique look. And meadow rues are no exception. They have sepals of varying sizes and colors, but sometimes the sepals are absent or fall off as the flower opens, leaving only the stamens behind to provide the floral display.

Sun or shade is usually OK

I thought I needed a consistently moist site in partial shade to successfully grow meadow rues, but what I had was a full-sun garden where water was provided in a feast-or-famine manner. I decided to plant them anyway to see how adaptable they were to full sun. They all thrived except for columbine meadow rue, which would have been happier with some shade and more consistent moisture. Although most meadow rues are adaptable to full sun, in hot or dry climates, partial shade would be better.

These plants are virtually trouble-free

Meadow rues are fairly low maintenance, although powdery mildew and leaf miners are occasional problems if the plants become stressed due to inconsistent conditions. They are generally easy-to-grow plants in Zones 4 to 8 and, in some cases, Zone 3. Meadow rues can be cut back in fall or spring. Deadheading isn’t essential, but I like to keep cutting back spent flower sprays because it encourages more blooms and results in a shorter and sturdier plant by the end of the growing season. Continual deadheading also reduces the chance of seedlings, which might be a positive or a negative, depending on your viewpoint.

Grow them for the foliage…

Many of these plants have foliage that is reminiscent of columbine (Aquilegia spp. and cvs., Zones 3–8). The large compound leaves are composed of many leaflets, giving them a lacy, fernlike effect. The leaflets may be round, oval, or linear and blue-green, gray-green, or just plain green. Their fine texture contrasts nicely with bolder-leaved perennials, such as rodgersia (Rodgersia spp. and cvs., Zones 3–8) and yellow wax-bells (Kirengeshoma palmata, Zones 5–8). It’s a bonus that the spring foliage of meadow rue commonly emerges with a purple-to-bronze cast.

While I am drawn to the pretty lavender and primrose yellow flowers of lavender mist and Yunnan meadow rues, the pompomlike clusters of stamen-only (sepal-less) flowers are equally charming. From the frothy yellow trusses of shining meadow rue to the exuberant starbursts of columbine meadow rue, far more plants display stamen-only flowers. There’s a unique quality to all the blossoms, making it exciting to have several species blooming in the garden from spring to fall. 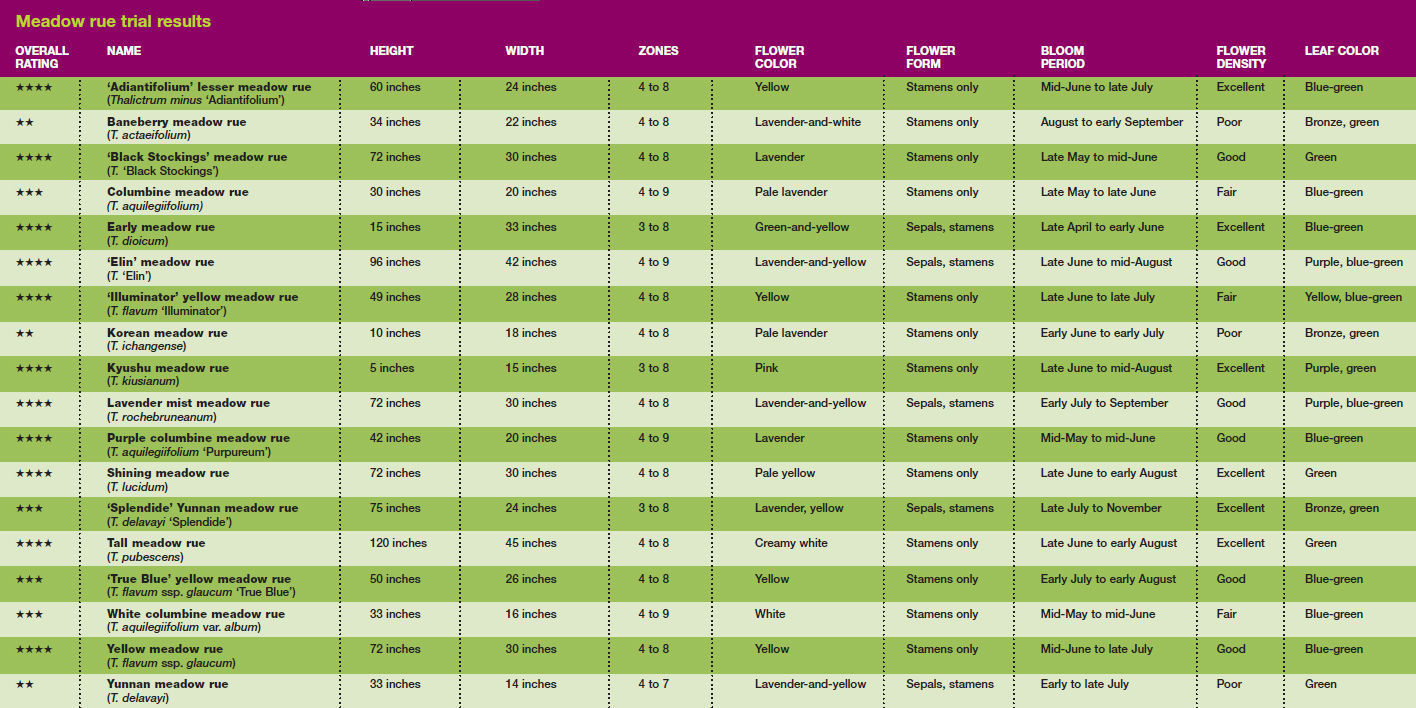 How the trials are done

For 28 years, the Plant Evaluation Program at the Chicago Botanic Garden (CBG) has been trialing plants and rating them on ornamental qualities, cultural adaptability, winter hardiness, and disease and pest resistance. The goal is to determine, through scientific evaluation, which plants are superior. Perennials, like meadow rues, are evaluated for a minimum of four years in CBG’s Zone 5b gardens. They are grown in full sun and in a well-drained, alkaline, clay-loam soil. Plants don’t get coddled in the trials: They get minimal care, thereby allowing them to thrive or fail under natural conditions. They are provided water as needed and mulched with composted leaves for water conservation and to suppress weeds. They are not staked, fertilized, winter-mulched, or treated for insects or diseases.

You might notice that sources list lavender mist meadow rue in different ways. Some books and online sites list this plant as the cultivar ‘Lavender Mist’, while others list it as ‘Purple Mist’. In our trial, I saw absolutely no difference between the species and either of these cultivars, leading me to believe they are the same plant. I’m guessing that, sometime in the past, someone put the common name in single quotes and a cultivar was born.

1) I wouldn’t be without graceful lavender mist meadow rue in my garden because it flowers for months and stays attractive even when it’s not in bloom. It reseeds generously but is easy to remove where it isn’t wanted. I don’t mind wherever it comes up—from the back of the border to the front—because its airy habit is see-through and doesn’t overpower neighboring plants. Most years, the stems top out at 6 feet, but in 2010, supercharged by springtime moisture, they rose to a colossal 8 feet. 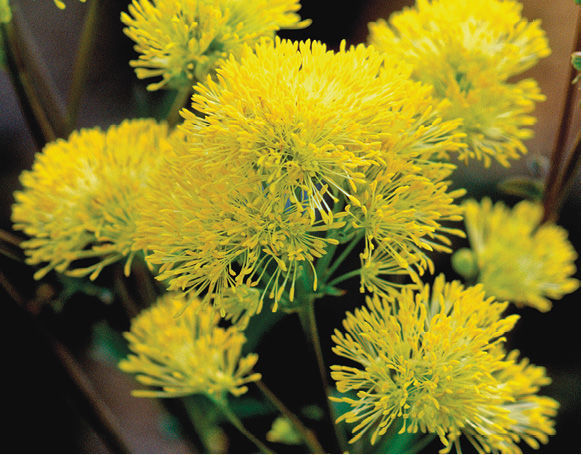 2) Yellow meadow rue pairs soft yellow flowers with dusty blue foliage for a brilliant effect. The handsome leaves are attractive all season but are particularly striking when topped with powder puffs of flowers in late spring and early summer. The leaf color is better in full sun than in partial shade. 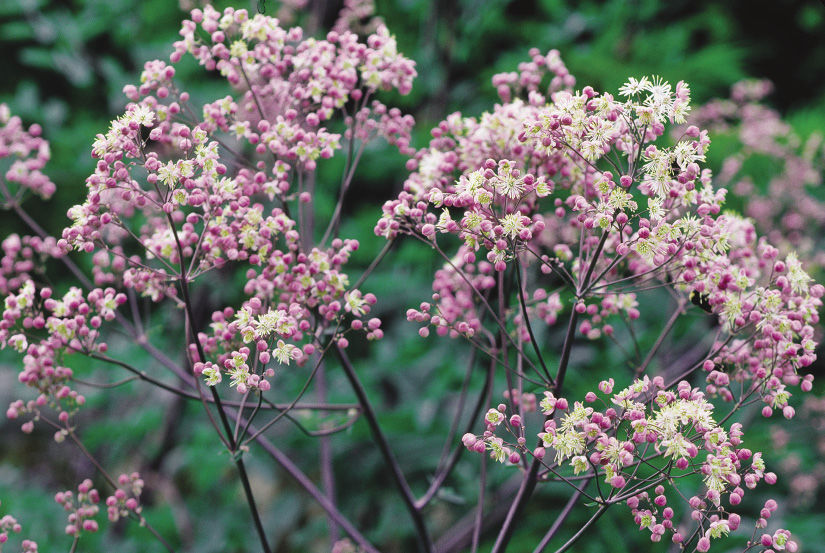 3) I consider ‘Elin’ meadow rue a pumped-up version of lavender mist meadow rue. At 8 feet tall, supersize ‘Elin’ stands head and shoulders above lavender mist, but they are similar in flower, foliage, and hardiness.

4) The first thing that impressed me about shining meadow rue was how different its lustrous green leaves were from any other meadow rue I’d grown. The linear leaflets give the foliage a fernlike feel. While the handsome leaves carry the early- and late-season display, the large plumes of soft yellow flowers provide a stunning midsummer show.

5) I find the diminutiveness of Kyushu meadow rue charming, especially when juxtaposed with the gargantuan habits of its cousins. At only 2 inches tall, it can easily get lost in a busy border. Even on its tippy toes, its flowers reach just 5 inches tall. But the blanket of fuzzy pink early-summer flowers is worth the trouble of ensuring that its neighbors play nice and don’t overcrowd it.

6) I wasn’t prepared for the sheer size of tall meadow rue and that thrilled me. A cloud of creamy white flowers top robust, 10-foot-tall stems in midsummer. Even ‘Elin’ tips its hat to this giant. Its size means tall meadow rue is not for every garden, but if you have the space, then you should try it. This moisture lover is native to the eastern United States and Canada and is perfect for a shady woodland garden. It also mixes well with common perennials in a formal border.

7) ‘Illuminator’ yellow meadow rue is unlike other meadow rues because its young leaves are bruised an acid-yellow-and-bronze color. The foliage eventually changes to blue-green as the flower buds swell in early summer; at that point, ‘Illuminator’ resembles the subspecies (T. flavum ssp. glaucum).

The jury is still out

Of the newest meadow rues, some I have grown and have proven their worth already, while others I haven’t had a chance to evaluate or are still too new to know for sure where they’ll land. But here’s what I’ve learned so far:

1) The dark purple stems of ‘Black Stockings’ meadow rue are eye-catching, to be sure, but did not quite live up to the promotional claims of being “near black,” “ebony,” or “jet black.” Tempting descriptions aside, ‘Black Stockings’ is a robust plant with bountiful stamen-only lavender flowers in late spring.

2) ‘Splendide’ Yunnan meadow rue is now in its awkward adolescent stage, but it is showing promise. Graceful lavender flowers float like butterflies above the tall stems from midsummer right up to frost. It needs to bulk up some, though, before it gets top honors.

3) Early meadow rue, a North American woodland native, was the earliest to bloom in midspring and is tolerant of deep shade. The male and female flowers are on separate plants, but the female flowers are insignificant. The understated male flowers (pendant yellow stamens with green sepals) intrigue me, and the lacy foliage—which resembles maidenhair fern—is delightful.

5) My heart skipped a beat when I saw the catalog picture of ‘Evening Star’ meadow rue. Each dark blue-green leaflet is marked with a silver starburst, giving the plant a thoroughly exotic look. I’ve nestled it into a slightly protected spot in partial shade, hoping to give it a fighting chance in winter. In an earlier trial, the species suffered repeated winter losses, significantly lowering its performance rating. ‘Evening Star’ is really too new to recommend or give evaluation results on, but I am stoked to see how it will grow.

6) A new meadow rue that is popping up everywhere and that I plan to test is ‘Perfume Star’ baneberry meadow rue. It’s from the same plant breeder who brought us ‘Splendide’. ‘Perfume Star’ features fragrant, white-tipped lavender stamens and blue-green leaves on stems that reach 42 inches tall. I’m looking forward to adding it to the garden in the near future.

Photos, except where noted: Jerry Pavia

The following mail-order plant sellers offer many of the meadow rues featured: