I’ve found that awareness and a quick response are two of the best allies against garden foes. By knowing my plants, as well as their pests and diseases, I can be proactive in combatting garden ailments. When problems do arise, I turn to the most benign and natural forms of control, like hand-picking invaders, setting up barriers, or trimming problem areas off plants. If these interventions fail, I apply my easy homemade potions to treat my gardens, keeping in mind the welfare of the soil and the dwellers who share the earth with me. Anyone walking into my potting area is liable to find four or five mixtures of fertilizer brews and oddball pest blends fermenting in tubs, along with a strange collection of tools and utensils. It is not the aftermath of some cataclysmic disaster; it is my laboratory, my living library, and the makings for a healthy garden.

Attack weeds with a directed stream of vinegar (5 percent acidity) mixed with a few drops of liquid soap. You may substitute equal parts water and isopropyl alcohol (70 percent solution) for the vinegar. This works well for areas in stone or brick patios where you don’t want grass or weeds. Drench the weed leaves in the heat of the day. When applying, be careful not to spray any treasured plants; cover them with newspaper for protection.

For large areas, spray the vegetation, lay down pieces of cardboard, top them with shredded bark (a layer at least 3 inches deep), and let the bed “rest” for a season. The next spring, the cardboard will be like mulch, and the bed will be weed-free and easy to work. 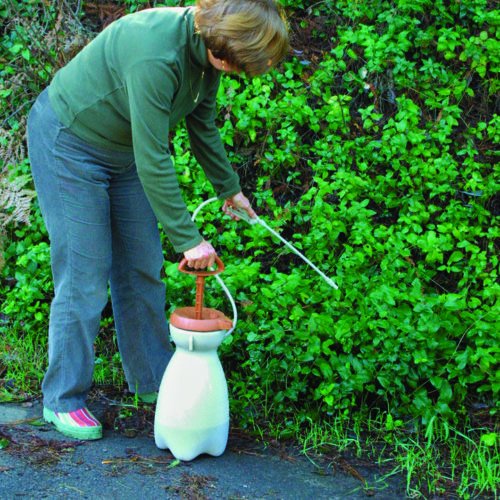 Professor Nick Christians and other researchers at Iowa State University found an amazing use for corn gluten meal, the tough, sticky, elastic by-product of milled cornmeal. The protein-rich corn gluten meal contains an herbicide that inhibits root formation during germination, and this effect lasts for months.

Timing is everything when it comes to using corn gluten. If the weed seeds have already germinated and sprouted, this technique won’t work. To protect a newly planted (but unseeded) bed from a weedy invasion, work corn gluten meal into the top 2 to 3 inches of your soil, and water thoroughly. Lawns and existing flower beds can be top-dressed with corn gluten meal. Do not fertilize the treated area for a month after application because corn gluten meal is high in nitrogen. 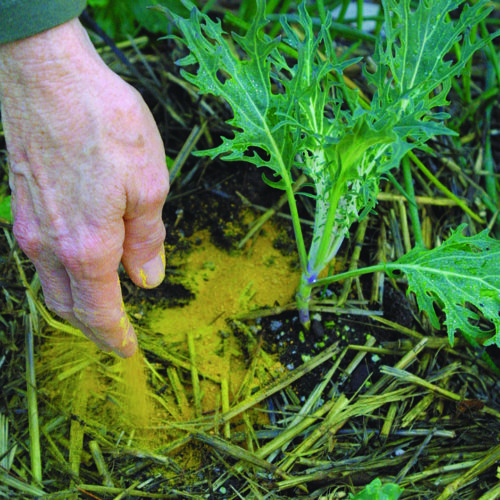 Chamomile tea is a cure-all for fungal diseases

It’s a little-known fact that chamomile tea has antibacterial and fungicidal properties that will aid plants suffering from fungus and mildew. I often make a simple brew for my sickly plants. Place 16 chamomile tea bags (or 2 cups of dried chamomile flowers) in 2 quarts of water, and simmer for 20 minutes. Turn off the heat, and allow the tea bags to steep for several hours. Strain, if using dried
flowers. Use the tea to irrigate tender seedlings (from the bottom) to prevent damping off, or use as a foliar spray to battle diseases on plants. Because I never let anything go to waste, I also add leftover tea and used tea bags to my watering can. 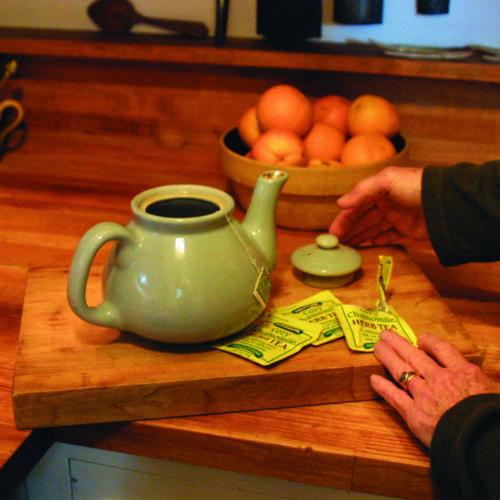 A tonic for black spot and powdery mildew on roses

Roses, while beautiful, are often plagued with black spot or powdery mildew. I mix these ingredients into a tonic, which I spray on my roses: 2 teaspoons of baking soda and 1/2 teaspoon of liquid soap or Murphy’s oil soap in 2 quarts of water. The tonic protects the roses for months.

For plants with a fungal, viral, or bacterial disease, cook up a batch of what I call “garlic soup.” Puree two cloves of garlic in a blender for a minute. Slowly add 1 quart of water, and continue blending for about six minutes. Strain the mixture, and add 1/8 teaspoon of liquid soap. Pour the liquid into a storage container and cover tightly. When you’re ready to take action, mix 1 part garlic soup with 10 parts water into a spray bottle and apply the mixture to the top and undersides of your sick plant’s leaves, taking caution not to spray beneficial insects and larvae. Scientists have discovered that garlic leaves are potent in their own right, so you can also puree two handfuls of leaves instead of using cloves. 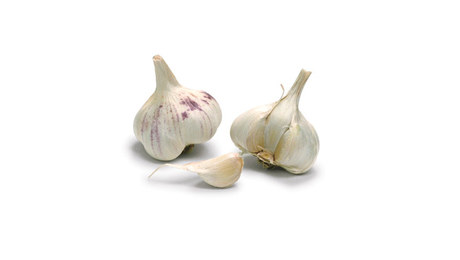 Aspirin is the remedy for fungal headaches

Black spot, powdery mildew, and rust are a terrible trio of fungi, which can attack and destroy your plants. Scientists have found that two uncoated aspirin tablets (325 milligrams each) dissolved in 1 quart of water and used as a foliar spray can thwart these diseases. 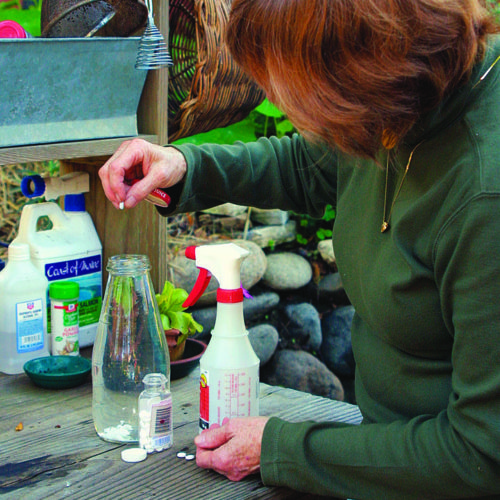 Most gardeners agree that a strong, tall fence (preferably electric) tilted outward at a 45-degree angle, or two fences about 5 feet apart, are the longest-lasting solutions to a deer problem. But if a fence isn’t in your budget or doesn’t fit in with your garden design, here are some alternatives: 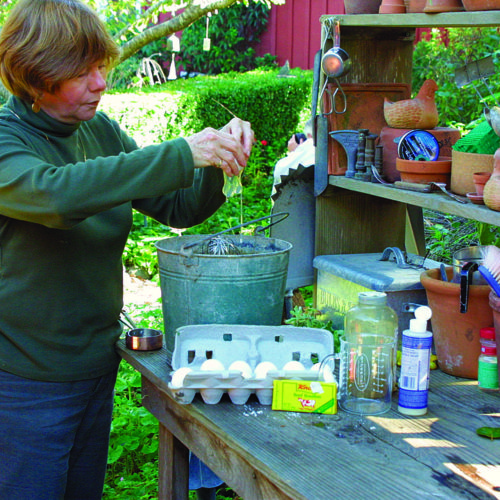 The heartbreak caused by a mowed-down sunflower, hosta, tulip, or whatever happened to be on the resident rabbit’s menu that day is something no gardener should have to bear. Here are a few tricks I use to divert those rascally rabbits: 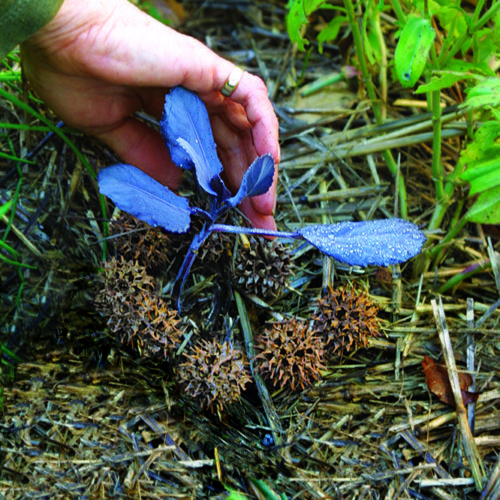 To discourage moles, sink a line of glass bottles into the soil with about 1 inch of neck exposed. The whistling sound of wind blowing across the bottle tops disrupts moles’ sensitive hearing and hinders their ability to find prey. Poking several noisy toy windmills into the soil will also disturb moles, as the vibrations will drive them away.

Moles dislike garlic, so try dropping some crushed cloves into the run. You can also repel them with a castor-oil concoction. Mix 8 tablespoons of castor oil and 1 tablespoon of liquid soap in 1 gallon of water. Dig down into one of the critter’s runs, and pour the mixture inside.

Barriers and baits for slugs and snails

Slugs and snails are responsible for wiping out many a gardener’s dreams. I create barriers around prized plants to protect them from annihilation. Copper strips produce a shock to snails and slugs trying to cross them. Wrap inexpensive, thin copper, found in craft stores, around pots, plants, and trees to create a protective barrier. Pine needles, coffee grounds, crushed eggshells, or diatomaceous earth (fossilized, silica-shell remains of prehistoric diatoms that desiccate insect bodies) provide a scratchy barrier and should be reapplied after a rain. Always purchase natural diatomaceous earth because swimming-pool grade contains crystalline silica, a respiratory hazard.

I also use several bait techniques to catch slugs and snails; then I scrape the creatures into soapy water in the morning. Here are some ways to lure them: 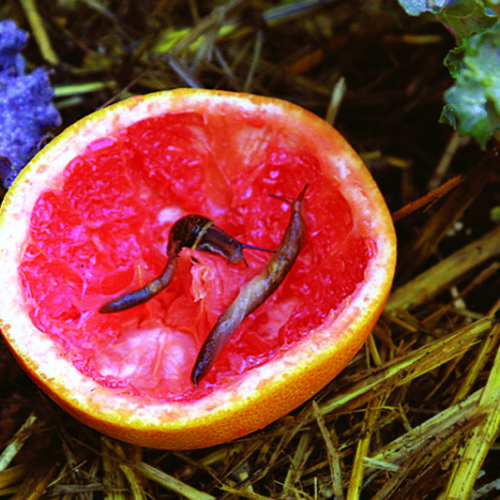 Like slugs and snails, Japanese beetles have plagued gardeners for years. One way to stop them in their tracks is to suck them up with a small, handheld vacuum. Another way is to throw a handful of larkspur or delphinium leaves into a blender, add the blend to 1 gallon of water, and spray the mixture onto plants being attacked by Japanese beetles. The deadly alkaloids (deliosine and delsoline) in the leaves will zap the beetles.

Some gardeners have had success deterring Japanese beetles by planting a ring of garlic and chives around the affected plants, while others bounce those bugs into a bucket of warm, soapy water with a long-handled spatula or spoon. It is a natural defense for a bug to drop to the ground, so the Japanese beetles will fall straight into their sudsy demise. Try to catch them in the early morning when
they’re still a little sluggish.

I have been using red-pepper powder for years on everything from cucumber beetles and spittlebugs to leafhoppers and cabbage loopers. Now there is scientific backing for this treatment: Entomologist Geoff Zehnder of Auburn University in Alabama credits McCormick red-pepper powder for protecting cabbages better than any standard chemical insecticide.

Mix 2 tablespoons of red-pepper powder and 6 drops of liquid soap in 1 gallon of water. Let the mixture sit overnight, and stir thoroughly. Pour the mixture into a spray bottle, shake well, and spray weekly on the tops and bottoms of the leaves. This will protect plants, especially members of the cabbage family (including broccoli, cauliflower, kale, and brussels sprouts), from destructive insects. 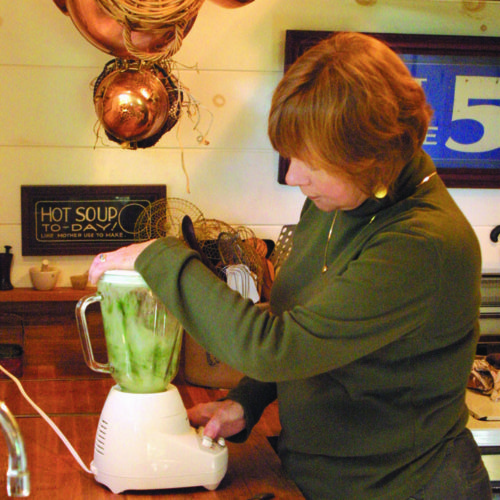 Tricks for removing aphids, mites, and other small insects

Scientists at Texas A&M University estimate that up to 90 percent of problems with aphids, mites, and spittle-bug nymphs can be cured by dislodging them with a strong blast of water. You can also use adhesive tape to remove aphids and other small insects from plant leaves. Simply wrap a long piece of tape around your fingers (sticky side out), and blot off the bugs.

For aphids in particular, set a yellow dish filled with soapy water near the plant. Aphids are drawn to the color yellow. For spider mites that persist despite a daily spray of plain water, use a spray developed by scientists at Purdue University. Combine 1/4 cup of buttermilk and 2 cups of wheat flour in 2-1/2 gallons of water. Pour the mixture into a spray bottle, shake the ingredients thoroughly, and spray it on your plants. 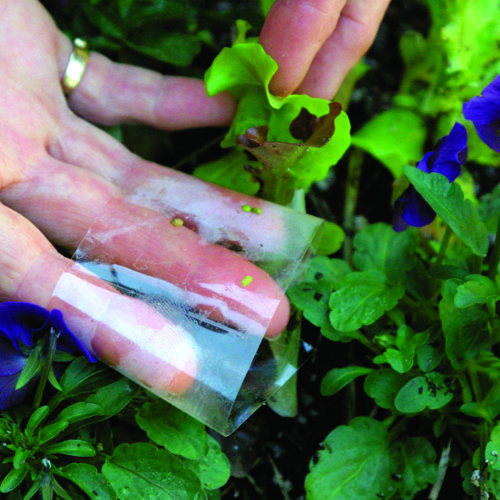 Basil and especially potently scented herbs—such as lavender, rosemary, tansy, southernwood, rue, mint, wormwood, or sage—help fight harmful leafhoppers, aphids, cabbage loopers, mites, cucumber beetles, and many other creepy crawlers. Simply gather a handful of fresh basil leaves and stems and any other herb trimmings you have on hand, crush them slightly, and stuff them into a mesh produce sack, if you have one. Put the sack (or the loose herbs) into a bucket or a large glass jar that is at least a half-gallon in size, and fill with water. Cover the container, and set it in the sun to brew for a few days. Remove the sack, or strain the solids from the mixture. Store the liquid in a covered container in a cool, dark area until it’s needed as an insecticide. When you’re ready to do battle, pour the herbal brew into a spray bottle, add 1/8 teaspoon of liquid soap, and shake well before spraying. 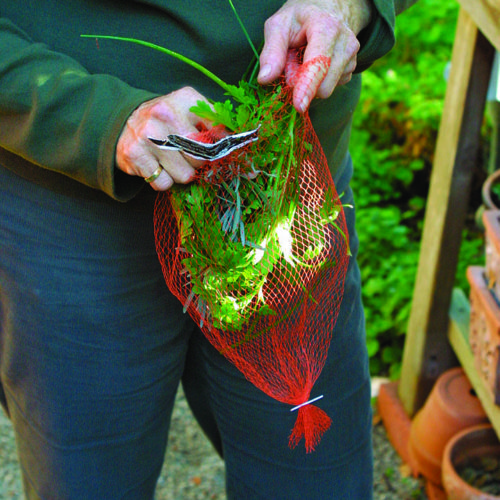