It’s best not to procrastinate when it comes to pruning climbing roses. Whether climbing roses are grown on a wall, fence, trellis, post, or pillar, I recommend pruning them every year not only to keep your climbers from overwhelming their supports but also to spare you the frustration of dealing with an overgrown snare of canes. Your roses will reward you with robust growth and more flowers.

Diseased branches are the first to go

Most climbing roses bloom at least twice each growing season: first on older branches and then on the current season’s growth. Pruning them while dormant in mid to late winter will encourage plenty of late-season flowers. I like to begin my pruning by removing as much foliage as possible from each rose. This helps prevent disease by removing dormant fungal spores and allows me to see the rose’s branching structure as I prune. Once I can see what I’m dealing with, I remove any diseased, injured, or spindly branches, cutting them away flush with the cane from which they emerge. If any of the older, woody canes have failed to bloom well during the previous season, I will prune them off too. Any canes that have outgrown their support will get a preliminary trim to set them back inbounds. I will also remove any crossing or awkwardly placed branches.

Prevent the spread of disease

Disinfect your pruning shears before moving on to the next plant by dipping them into a 25 percent bleach solution, rubbing them with an antiseptic wipe, or spraying them with a commercial disinfectant.

Step back before moving on

After pruning undesirable branches, I’ll step back, have a look at what remains, and choose the branches that will form the plant’s main framework for the upcoming season. I look for strong, healthy canes with plenty of swelling buds or side shoots (called laterals). I’ll need enough vigorous canes at various heights to cover the support from top to bottom without crossing. Any branches that don’t meet my criteria are removed.

I prefer to prune and train the lowest of the chosen canes first. I unfasten each branch one by one and trim it to fit the support, making sure I cut far enough back to account for new growth. I then shorten each of the lateral shoots down to two to five buds, always cutting about ¼ inch above, and parallel to, a bud. I then reattach the main branch to the support, keeping it as close to horizontal as I can. Since climbing roses have no tendrils, rootlets, or twining stems to help them cling to their support, they need our help to stay in place. I prefer plastic ties that stretch as the canes grow, but plastic-coated wire ties are fine, too, as long as they are tied loosely, with plenty of room for the branch to expand. If any branch still projects beyond the support once it’s attached, I’ll finish by trimming away the excess.

Don’t forget to take a few steps back after pruning and training each main branch. Otherwise, you may get so involved in cutting and placing the branch you’re working on that you lose sight of the plant’s overall shape. Remember that the end goal is a climbing rose that decorates its support without overwhelming it. 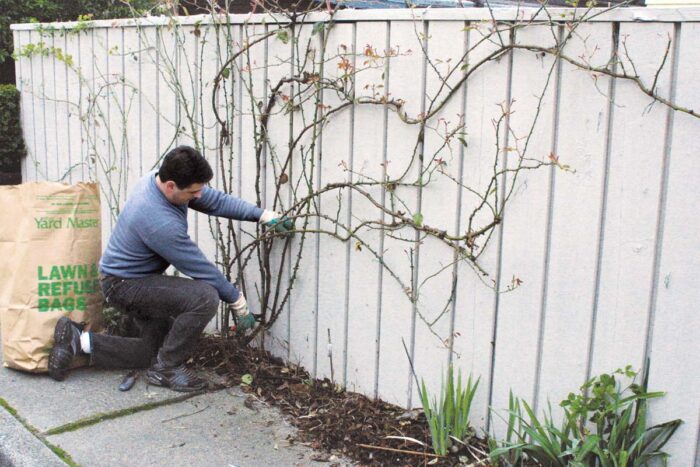 Part 2: Trim what’s left with a framework in mind

Types of frameworks for roses

The objective in pruning climbers is to clothe their supports in a framework of healthy, vigorous growth, which will produce a large quantity of quality blooms in the upcoming season.

TIP: Don’t forget to remove suckers from a grafted rose 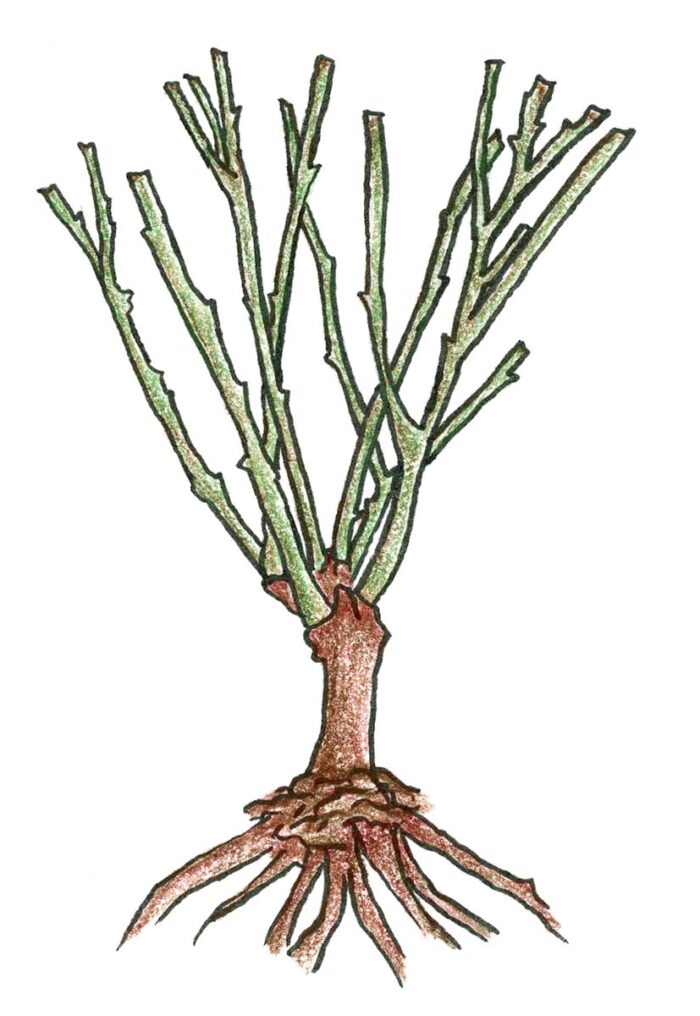 If I’m pruning a bud-grafted rose, I’ll check the base of the plant for any suckers growing from the rootstock below the bud union—a knobby, swollen mass at or near the soil surface. Pruning rootstock suckers yields temporary results, so I remove them by yanking sharply downward near the point where they emerge from the plant. This removes all of the bud tissue from which the sucker grew. If these suckers are allowed to persist, they will eventually overwhelm the upper, grafted portion of the plant.

Video
How to Prune Climbing Roses

More videos on pruning roses
How to Prune Shrub Roses

This site is protected by reCAPTCHA and the Google Privacy Policy and Terms of Service apply.
See all newsletters
Previous: How to Prune Shrub Roses Next: How to Prune Climbing Roses
X
View Comments