I know people are confused about how to prune hydrangeas because I get asked about it all the time. The three most common reasons for their confusion are the plant’s dead-looking appearance in winter, its failure to bloom in summer, and the reasoning that because it’s a shrub it needs to be pruned. But these popular woody plants can live long, floriferous lives without ever feeling the cold blade of a pair of Felcos. Hydrangeas, though, can handle pruning (which, if done at the wrong time, may be the cause for the lack of flowers), and sometimes you might want or need to cut them back a bit. For example, you may not like the look of the fading blooms, or your shrub may be a bit too tall. Pruning hydrangeas can also improve a shrub’s vigor and increase the size of its flowers.

Hydrangeas that bloom on old wood

Prune after the flowers start to fade in late summer 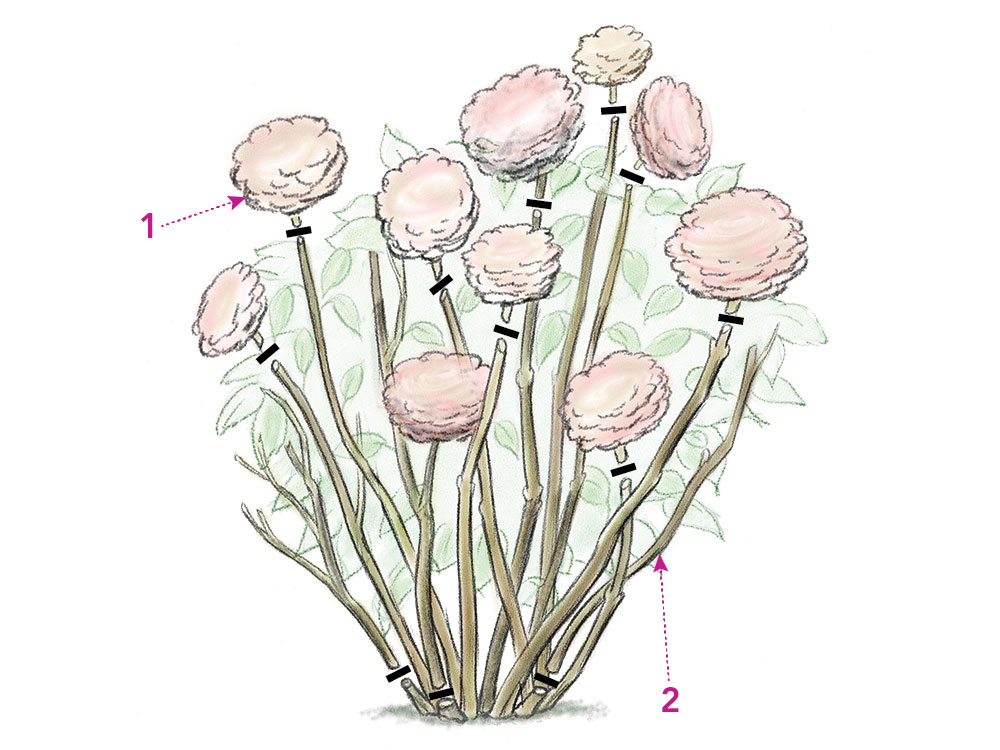 To determine if your hydrangea blooms on old wood, think about when it flowers. Shrubs with this characteristic generally begin blooming in early summer and peter out by midsummer, though sporadic blooms may appear afterward. These shrubs form next year’s flower buds in late summer or early fall as the days get shorter and temperatures cool off. To reduce the risk of removing these buds, prune just as the flowers begin to fade. Often, the earlier you get it done after bloom, the quicker the shrub can recover, producing more and larger blooms next season.

1. To tidy up, remove old blooms 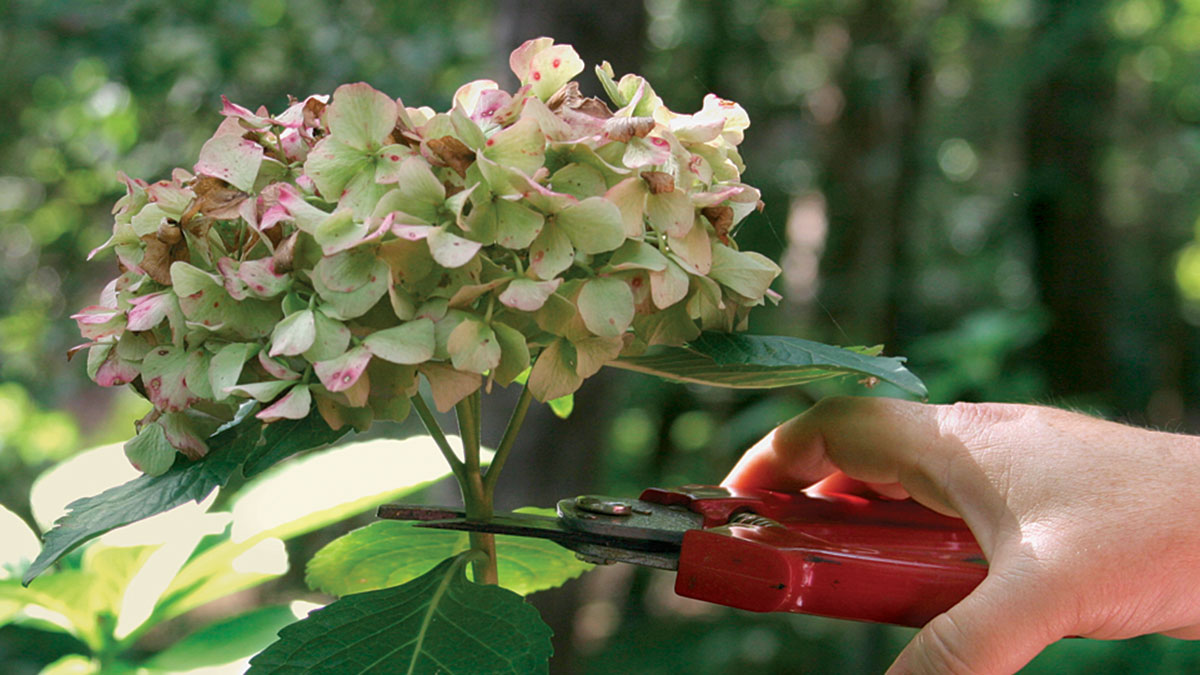 Gardeners who want to maintain a tidy appearance can snip off spent blooms just below the flower head and remove any wayward or straggly canes at the soil line. 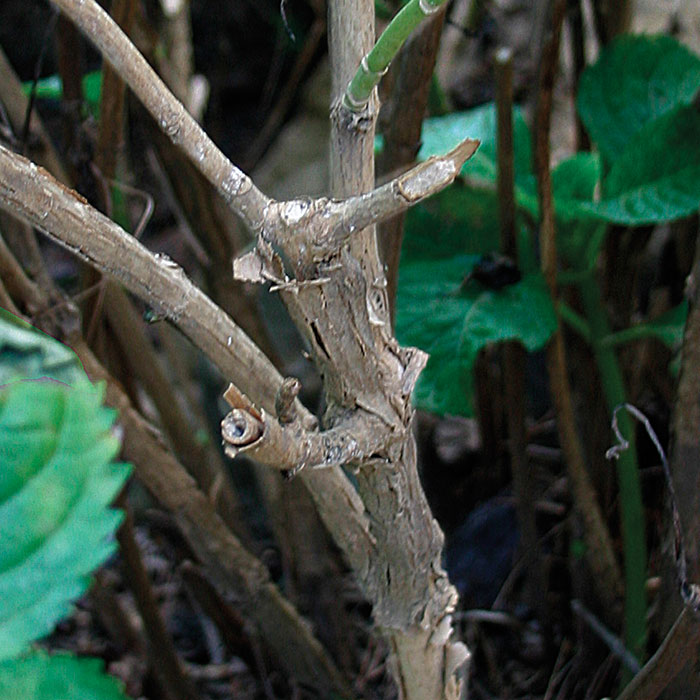 When a hydrangea gets old and woody, it can produce smaller blooms. Regular removal of a few of the oldest canes at the soil line can keep the shrub vigorous, producing large and abundant flowers. The same method can keep a shrub from getting too tall by targeting the tallest canes for removal.

Almost everybody is enchanted by the large, mophead blooms of bigleaf hydrangea (Hydrangea macrophylla and cvs., Zones 4–9). And it seems that almost everybody who grows these flowering shrubs has questions about pruning them. The thought is often that, because they are shrubs, they must need to be pruned. Some gardeners also think that cutting back their hydrangea might make it bloom. Neither of these thoughts is correct. Bigleaf hydrangeas grow just fine without any pruning, and making your cuts at the wrong time can actually remove the flower buds you are hoping to get.

Bigleaf hydrangeas typically bloom on old wood, meaning the flower buds are on the growth produced the previous season. If you prune them before they flower, you will be removing the flower buds. Many newer varieties actually produce buds on old and new wood, so pruning too early doesn’t stop the whole show, just a good portion of it. But if your hydrangea isn’t blooming, poorly timed pruning is often the culprit. The best time to cut back a bigleaf hydrangea is just after it is done blooming. The shrub then has ample time to set new growth and harden off before winter.

If you do decide you need to prune your bigleaf hydrangea, this video will give you the information you need to time your cuts correctly and identify where to make them on the shrub. The only tools you will need are hand pruners and perhaps a pair of loppers to reach down into the hydrangea. Also, be sure to wear some safety glasses. You might not think they are cool, but it is very easy to poke your eye on a stem as you are trying to see down into the shrub. And a poke in the eye is never cool.

So stay safe, time it right, and enjoy your shrub.

Hydrangeas that bloom on new wood

Cut back these shrubs in late winter before new growth begins 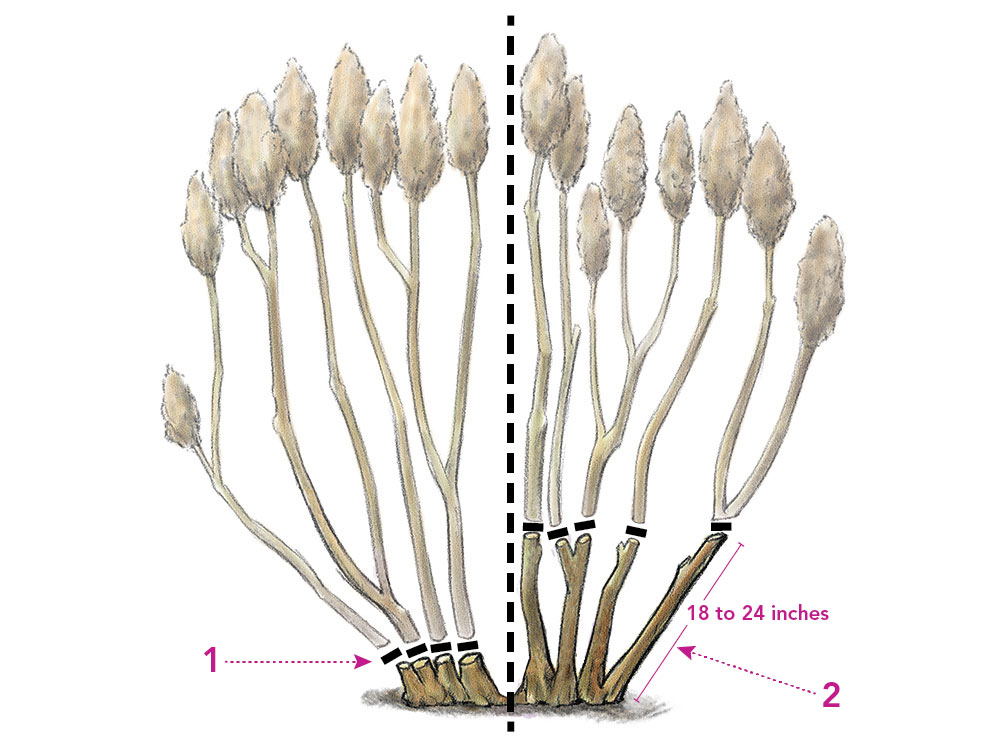 Because they need to grow and set buds the same year that they bloom, shrubs that flower on new wood generally start blossoming later than old-growth bloomers, beginning in midsummer and continuing until the first frost. These shrubs are forgiving if pruning is not done at a certain time as long as you avoid pruning when the flower buds are opening.

1. To get bigger flowers, cut them all the way back 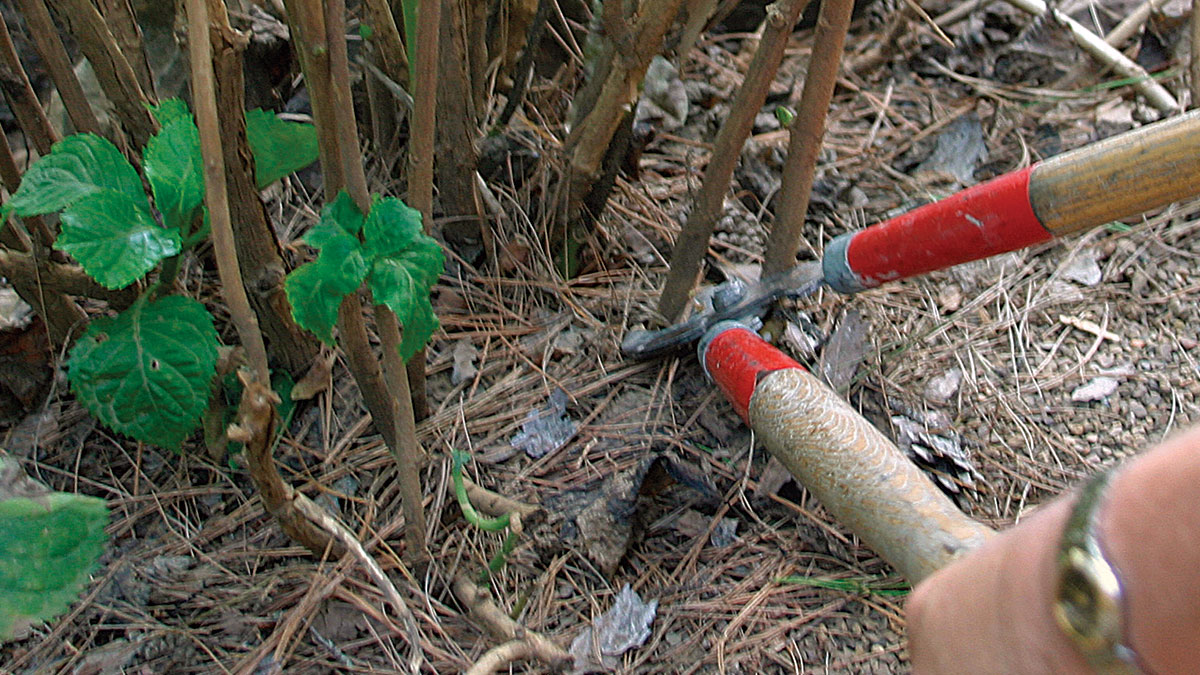 In late winter or early spring, these shrubs can be cut all the way back to the ground. Smooth hydrangeas will produce much larger blooms if pruned hard like this each year, but many gardeners opt for smaller blooms on sturdier stems. 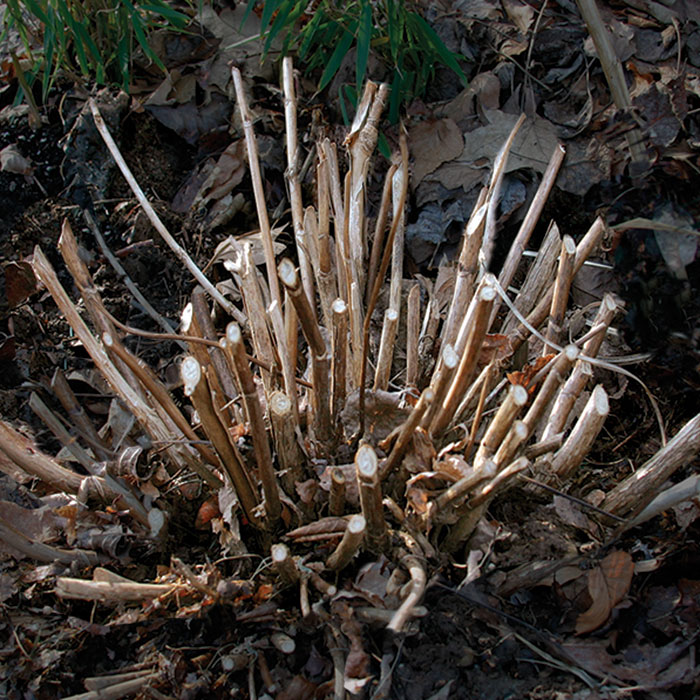 2. To reduce flopping, leave a framework of old growth

Some hydrangeas’ branches often fall over under the weight of their blooms, especially after overhead irrigation or after a good rain. One way to alleviate this flopping is to cut the stems to a height of 18 to 24 inches to provide a sturdy framework to support new growth.

—Janet Carson is the horticulture specialist for the University of Arkansas Cooperative Extension Service.

Photos, except where noted: Steve Aitken

This site is protected by reCAPTCHA and the Google Privacy Policy and Terms of Service apply.
See all newsletters
Next: How to Prune Hydrangea Bushes
X
View Comments