Unwilling to face a barren landscape in winter, these designers bridged the gap between fall and spring

Some gardeners revel in the shifting seasons: cele­brating the changes in scenery, welcoming the visual rest that winter brings, and relishing its contrast to the exuberance of summer. But for others, this roller-coaster ride is stressful, and they find winter not restful but depressing.

They wish for a garden they can enjoy all season long, without the extreme ups and downs. Such is the garden that Alan Collachicco and William Towne created in Byfield, Massachusetts. With a strong underlying structure, small planting beds that fade away in winter, and a subtle but unified color scheme, they’ve created a garden that changes only slightly throughout the year without sacrificing the joys that gardening can bring. Come winter, instead of lamenting a sleeping garden, they can now enjoy a fourth—just as satisfying—season.

Strong forms last throughout the seasons

When Alan and Bill moved to their historic house 14 years ago, the property was a blank slate. They felt it was important to create a garden that reflected the history of the house, parts of which date back to the 17th century. Evoking a sense of gravitas was key to creating a garden that felt like it had always been there. The most important step was to create some solid bones. Alan and Bill planned a large central maze of evergreen ‘Green Mountain’ boxwood ( Buxus ‘Green Mountain’, USDA Hardiness Zones 6–9) and an extensive network of stone walls and flagstone and pea-gravel paths. 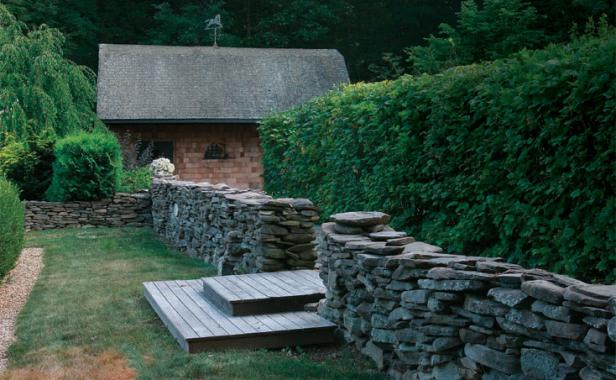 They then got to work, planting each shrub and laying each stone themselves. This foundation created not only a sense of history but also the stage upon which fleeting seasonal highlights are played out. And in winter, when most gardens are bare, the stonework and evergreens are even more evident. In addition to the maze, which is the star of the show in all four seasons, Alan and Bill used a variety of evergreens to create enclosures throughout the garden, both to provide privacy and to supply a green backdrop for winter. Plants with interesting bark, forms, and shapes that look great in winter are scattered throughout the garden, as well.

Small subtle beds are less jarring when barren in winter

Grand herbaceous borders would have required too much maintenance for Alan and Bill’s taste and lifestyle and, come winter, would have become large expanses of barren earth. They chose, instead, to highlight the hardscaping and brighten the dark corners with small beds tucked against walls and walkways. These small beds, when bare in winter, recede into the background, which lets the stonework around them stand out.

In the warmer months, the beds are filled with tapestries of subdued plants, like hostas ( Hosta spp. and cvs., Zones 3–9), European ginger ( Asarum europaeum , Zones 4–8), ferns, and astilbes ( Astilbe spp. and cvs., Zones 3–8). You won’t find many shrubs in these small beds. If any tree or shrubs are present, they are specimens that become focal points as the season winds down, with their eye-catching forms or decorative bark.

Most of the flowering plants in this garden bloom in shades of cream and white. In winter, the white flowers are replaced by intermittent dustings of pristine snow, another way this garden transitions so seamlessly from season to season. The few more colorful flowers Alan and Bill allow themselves to introduce must be exceptional and beloved, and the subdued palette of the rest of the garden makes them stand out even more when they’re in bloom.

When highlighting trees with great bark for winter interest, prune small lower branches to above eye level so that
the eye is drawn to the bark, not the branches.

No matter how many evergreens are added to a garden, winter can be a bit gloomy in shades of muted green, gray, and beige. Alan and Bill discovered that a few dashes of paint go a long way toward brightening things up and highlighting some of the exceptional hardscape and ornaments they display. The key was to find a paint color that reads as subtle yet complex and that stands out in winter but isn’t overpowering. They settled on Benjamin Moore’s Black Bean Soup, a dusky purple-brown that seems to shift and change with the seasons and the time of day. It provides a neutral background for plants in the growing season and takes the place of flowers in winter. The color shows up throughout the garden—from the columns on the rear of the garage to the large classic urns in the back of the garden. Alan and Bill expand on this color theme in the warmer months with the use of similarly hued foliage plants. The result is a garden that’s connected from back to front, left to right, January to December.

When asked for the most important lesson we can learn from their
year-round garden, Alan responds, “If the bones are good, the garden is
good.” The bones of this timeless garden are, indeed, exceptional, and
in turn, this formal yet casual garden is just as satisfying in February
as it is in July.

8 Types of Pollinators that Visit the Garden

Containers filled with pollinator-pleasing plants will bring an assortment of fascinating creatures to your yard. From the portfolio of nature photographer Bill Johnson, let’s take a look at some of…