The Best of the Bee Balms

Trial results identify the most disease-resistant and pollinator-friendly varieties

Every gardener has experienced love at first sight with at least one plant, but many of us have had more of a love-hate relationship with bee balm (Monarda spp. and cvs., Zones 4-9). Without fail, we are drawn to its vibrant jewel tones: a range of reds, pinks, and purples. Its uniquely shaped flowers, reminiscent of royalty wearing crowns and Elizabethan collars, stand out amid the daisy shapes that are so common in midsummer. Folklore says its leaves can be used to soothe bee stings (hence the common name), though today many of us grow bee balm to attract bees and other pollinators.

While there are many reasons to love bee balm, powdery mildew can be a perpetual source of disappointment, causing leaf discoloration and even defoliation. Some gardeners also fault bee balm for its spreading nature, though I personally love any plant that allows me to plant frugally and share generously.

Most selections of bee balm are derived from scarlet bee balm (Monarda didyma, Zones 4-9) and wild bergamot (M. fistulosa, Zones 3-9). Over decades, hybridization between these two species has produced an overwhelming number of cultivars for gardeners to choose from. With the goal of making that choice easier, Mt. Cuba Center in Hockessin, Delaware, evaluated 40 different selections of Monarda based on floral display, habit quality, and disease resistance over a three-year period. Unfortunately, we did not find a single plant that rated perfectly in all of these categories. Jump to trial results.

That being said, the most well-rounded cultivar in our trial was ‘Claire Grace’ (M. fistulosa ‘Claire Grace’, Zones 3-9). This improved selection of the wild species boasts a massive number of light purple flowers atop lustrous, disease-resistant foliage. Although ‘Claire Grace’ is not perfectly mildew-free, the minor infections we observed in our otherwise mildew-laden trial were barely noticeable and did not cause much defoliation. As a selection of M. fistulosa, ‘Claire Grace’ is also more tolerant of normal garden soil, whereas selections and hybrids of M. didyma prefer consistently moist soil. ‘Claire Grace’ also has a relatively moderate rate of spread, which may be appealing to some gardeners.

‘Dark Ponticum’ is an excellent choice for those who desire a top-notch floral display as well as attractive foliage. Its purple flowers are borne in profusion atop bluish green foliage, which is a rare leaf color among bee balm. ‘Dark Ponticum’ also remains lush and dense throughout the entire growing season despite the fact that it can develop a fair amount of powdery mildew. However, unlike with other susceptible cultivars, powdery mildew does not actually damage its leaves. After a few good rains, the mildew dissipates, leaving beautiful blue-green foliage to be admired well into fall.

In situations where not even a speck of powdery mildew can be tolerated, ‘Purple Rooster’ is the perfect choice. This cultivar proved completely disease-free throughout the entire three-year trial. This is especially impressive given that a trial like this is essentially a large monoculture that drastically exaggerates disease pressure beyond what most home gardeners will ever experience. The exceptional disease resistance of ‘Purple Rooster’ does come at a slight cost to the floral display, as fewer flowers are produced. However, even that can be overlooked, as ‘Purple Rooster’ has the darkest purple flowers of any cultivar we tested.

For a different type of foliage color, ‘Violet Queen’ represents an interesting selection, thanks to the silvery haze created by the fuzzy hairs covering the surfaces of its leaves. This cultivar also displays excellent resistance to powdery mildew. However, not to be outdone by the foliage, the floral display is one of the best we evaluated. Hundreds, perhaps even thousands, of purple flowers covered our small patch of ‘Violet Queen’ for three weeks in midsummer. Such an abundant display of flowers was rivaled only by ‘Claire Grace’.

For those, like myself, who are more attracted to reddish flowers, ‘Judith’s Fancy Fuchsia’ captivates with a profusion of large, 3-inch-wide flowers in midsummer. The larger flower size is a result of some of its M. didyma parentage, which naturally has flowers as wide as 4 inches in diameter. ‘Judith’s Fancy Fuchsia’ is a relatively new cultivar and may be difficult to find. A similar selection that is more commonly available is ‘Raspberry Wine’. The habit and floral display are nearly identical with these two, with the only difference being that ‘Judith’s Fancy Fuchsia’ is more resistant to powdery mildew.

Many of the newest cultivars of bee balm being released today have been selected for compact and dwarf habits. In our trial, we found that many of the compact selections performed poorly. The one exception was Grand Marshall™ (Monarda ‘AChall’). This knee-high plant has excellent powdery mildew resistance and produces numerous large magenta flowers. Whereas most compact varieties have overly dense habits that often look best in a container, Grand Marshall™ has a habit more similar to taller bee balms, at one-third the height. This more natural appearance makes Grand Marshall™ easier to integrate with neighboring plants in the landscape.

The best ones for pollinators 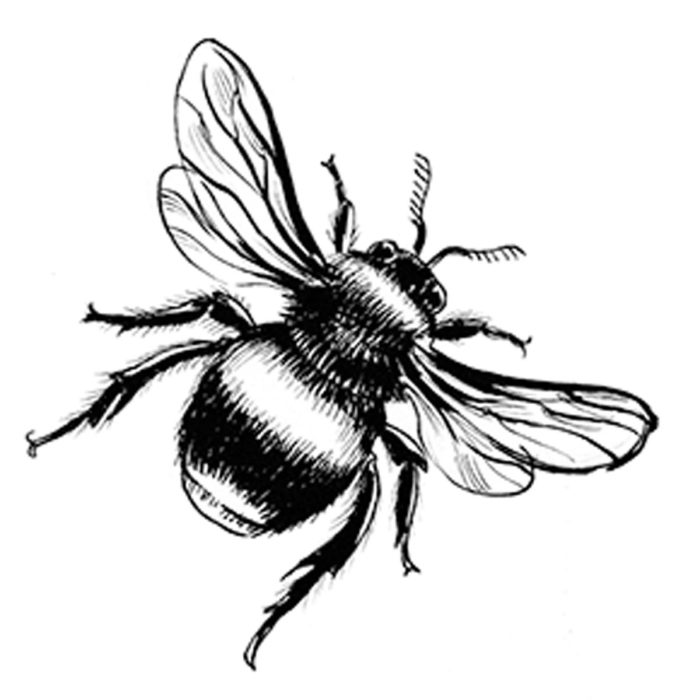 Bee balms are frequently recommended for pollinator gardens, and for good reason, as they are abuzz with activity during the heat of summer. So you may be surprised to learn that not all bee balms attract the same types of pollinators.

For example, Monarda didyma, with its huge, bright red flowers, is only pollinated by humming­birds. Bees may visit, but they effectively “rob” nectar from the flower by cutting a small hole in the base of the tube, thus avoiding the pollen-producing structures altogether. Hummingbirds are able to insert their tongues down the full length of the floral tubes to reach the nectar at the bottom. While doing so, they collect pollen on their forehead, then transfer it to the next flower they visit. M. fistulosa, on the other hand, has flowers that are too small for hummingbirds to use and so is pollinated by bees, moths, and butterflies. Hybrids between these two species are also typically insect-pollinated, as the flowers are usually too small to accommodate the beak of a hummingbird. 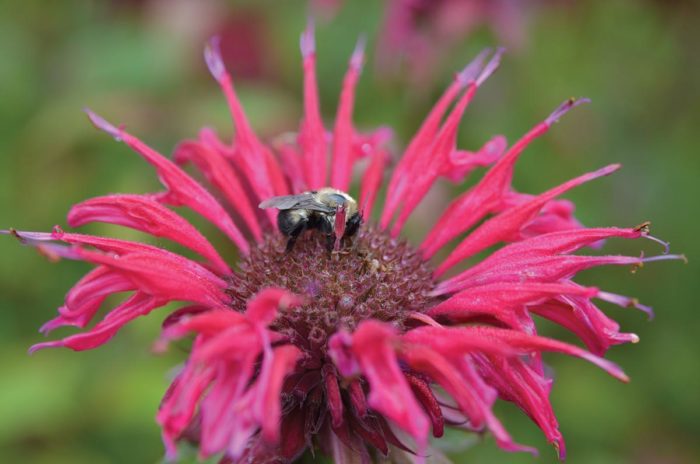 In an effort to determine if certain selections are more loved by pollinators than others, Mt. Cuba Center enlisted the help of dedicated volunteers (the Pollinator Watch Team) to monitor pollinator visits to each selection in our trial. They found that ‘Jacob Cline’ was favored the most by hummingbirds, much more than other cultivars with large, red flowers. One possible explanation is that this particular ‘Jacob Cline’ was taller than the similar cultivars that surrounded it, making access to the flowers much easier.

Moths and butterflies were observed visiting ‘Claire Grace’ most often, followed closely by ‘On Parade’ and ‘Violet Queen’. Compared to other selections, these three cultivars produced the most prolific floral displays, blooming with more flowers and over a longer period of time. It is not surprising, then, to see more pollinators visiting these plants. While there is still much to be learned about the ecological value and function of cultivars in general, it is encouraging to see how traits like flower production and length of bloom may be advantageous to gardeners and pollinators alike.

What to Do About Powdery Mildew 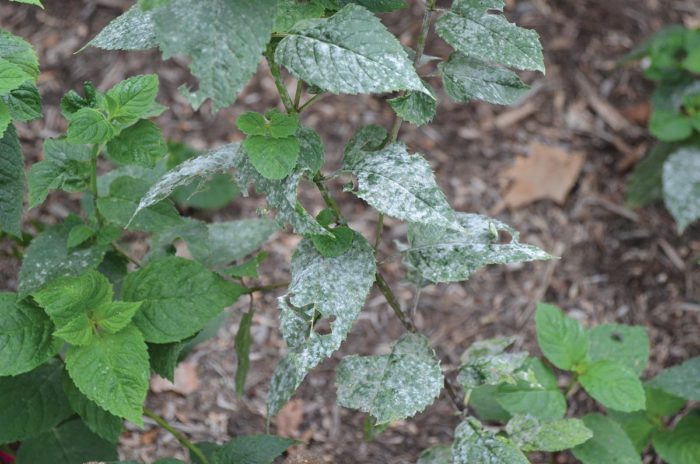 Powdery mildew is a ubiquitous fungus in the environment, requiring only a susceptible host and proper weather conditions to grow. It develops as a whitish gray fuzz or haze on leaves and stems, and usually first appears when the days are warm and the nights are cool. The cool nights provide the high humidity that favors spore germination (initiation of new infections), and warm days provide the low humidity that enables spore dispersal (spreading of existing infections).

In the Mt. Cuba Center bee balm evaluation, the first signs of infection typically appeared as the plants started to flower. Flowering requires a significant amount of energy and resources, and this stress can make plants vulnerable to infection. Limiting the amount of stress a plant experiences can help prevent or reduce infections; for bee balms, this might be accomplished by providing adequate water during its flowering period. Dividing older clumps every few years may also help to reinvigorate tired and stress-prone plants.