The best gardens are a beautiful blend of color, form, and texture.” This could be the opening line from almost any book on garden design. But what is texture? This question has haunted me since my first days of gardening. It seems like every garden designer I ask has a hard time defining it, as well. Most of us know what it is in theory—but explaining it, and infusing the right amount of it in a landscape, is when things get tricky. The concept of texture is still not entirely clear to me. When I visited the hillside garden of Mary and Roger in Tiburon, California, however, I knew I had found a truly textural wonder. To ensure they created a space that was filled with as much visual excitement as possible, the couple relied on a strategy of pairing plants on the opposite end of the texture spectrum—a dynamic blend of bold and fine. Every place you look in this unique landscape, you’ll find plants that have the boldest presence imaginable nestled next to plants with the finest, most wispy appearance. The result is a landscape that stimulates all the senses. 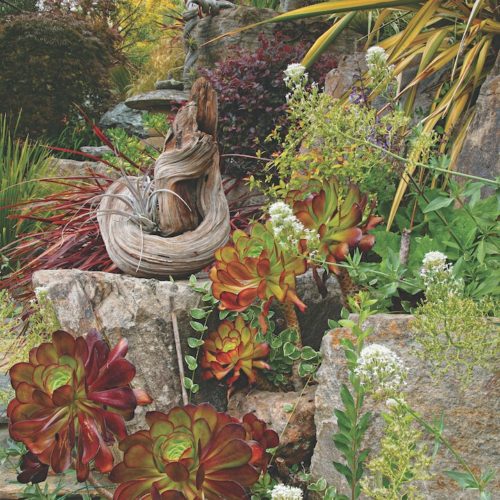 It’s important to understand that many plants fall somewhere along the texture continuum, and it can be hard to define some plants as bold or fine. It’s easier to identify plants that lie at the extreme ends of the continuum—the boldest of the bold and the finest of the fine. So, instead of walking through the nursery and trying to determine if a plant has a bold or fine texture, start by homing in on plants whose texture obviously jumps out. If you look at a plant and think it has a tangible, in-your-face quality about it, you’ve likely found a bold-textured plant. For Roger and Mary, this was the starting place for their design. After the terracing and hardscaping was installed in 1994, the couple took a hard look at a list of their favorite plants. Many, they noticed, were extremely bulky and bold—like foxtail agave (Agave attenuata, USDA Hardiness Zones 9–11) bright star yucca (Yucca gloriosa ‘Walbristar’,Zones 7–10), and ‘Cyclops’ aeonium (Aeonium ‘Cyclops’, Zones 9–11, photo, p. 23).

They installed these plants first, for several reasons. For one, they are large, so they take up much of the real estate. Planting them at the beginning allowed Roger and Mary to leave enough room for them to reach their full potential. Second, these bold plants are stars on their own, so they needed to be strategically placed throughout the entire garden, which prevented them from competing with one another. The installation process went on in this manner until the couple came across several plants that they loved—but whose textures were harder to define. Sago palm (Cycas revoluta, Zones 9–11) and smokebush
(Cotinus coggygria and cvs., Zones 4–9) were two such plants. In the end, they decided these options were bold textured, too, because they had bulky and broad leaves and an eye-catching presence. 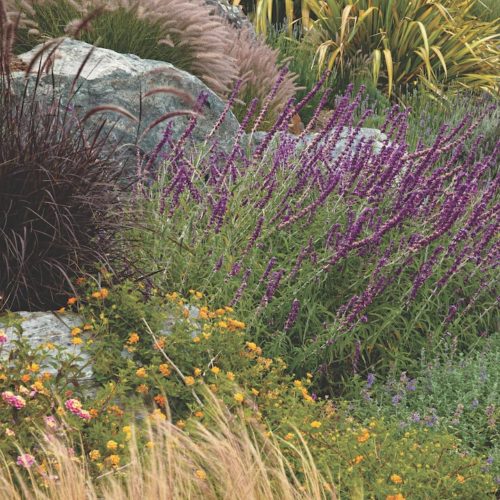 If the garden were filled with nothing but bold plants, oddly enough, it would be boring. Excitement comes from the energy achieved when you pair contrasts. To find the next set of plants, Roger and Mary looked to the complete opposite end of the texture spectrum. They didn’t purchase plants that might be seen by some folks as fine-textured—they went for plants that screamed fine texture, like feathery air plants (Tillandsia spp. and cvs., Zones 12–13) or small-needled treasures such as creeping raspberry
(Rubus pentalobus, Zones 6–9, photo, p. 24). These soft-looking plants were then placed next to the existing bold companions, creating the strongest contrast possible. Pairing the two texture extremes results in a lively combination.

Remember, though, that bold-textured plants
have a stronger visual presence than fine-textured options. To keep things well balanced, you likely need a few fine-textured plants for every bold-
textured one. For example, a mass of Mexican
feather grass is necessary to balance the imposing stature of a large-bladed New Zealand flax (Phormium tenax and cvs., Zones 8–11,). 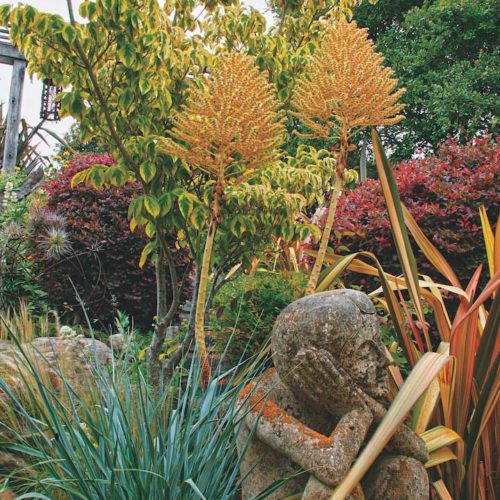 With such texture extremes in the plantings, there needs to be a place to draw the eye instead of it constantly flitting from one area of contrast to the next. You want lots of energy in the space but not so much that the landscape feels frenetic. Focal points are necessary for drawing the eye and allowing it to rest on one spot—even for just a second. Roger and Mary used an array of objects—from serpentine boulders, to sleek metal sculptures, to a set of large Moroccan doors—as their focal points. Each of these art pieces is carefully placed in the landscape, keeping the overall theme of pairing texture extremes in mind.

For instance, when it came to finding an appropriate focal point for a narrow pathway flanked by feathery Mexican weeping bamboo (Otatea acuminata ‘Michoacan’, Zones 9–11), the Moroccan doors were the perfect choice (photo, left). The contrast between the bold wooden panels and the finely cut foliage is similar to the texture pairings of plants throughout the garden.

Focusing almost entirely on the textural side of a garden ensures that it will have aesthetic appeal as well as perpetual excitement. Despite texture playing the most significant role in Roger and Mary’s plant choices and placement, they found that, by default, their garden is never lacking in color or a diversity of forms. In the end, this talented couple simplified the design process and created a year-round tapestry of interest.