Filling a garden with rocks for a purpose

My name is James Rail, an American, who has been living in Gardaber, a suburb of Reykjavik, Iceland, for almost 60 years. Obviously, gardening conditions in Iceland are different with a short growing season, cool temperatures, and strong winds. Nevertheless, with the long daylight hours of summer, flowers and trees grow surprisingly well. As a novice gardener, it has taken me a long time to establish my garden, which now has some 140 varieties of perennials, 38 different bushes, and 9 kinds of trees. I built a sunroom onto my house that has added several more months to my gardening joy. In spite of temps near freezing in the winter and with limited daylight hours, I have succulents and cactus surviving along with fuchsias and bougainvillea in the sunroom.

Rocks are easy to find in Iceland. The fact is that the whole island is one huge expanse of rocks, with a small percentage of the country made up of sand and soil that has been slowly building up in the fjords and flatlands. So when I need rocks to add to Stekkjarflot 8, going out and finding them is no problem. I started needing rocks when I began landscaping the yard back in 1964. Actually, the ground was loaded with rocks and stones that I spent a lot of time removing so I could plant a lawn. Fortunately, the house next door was excavating for a garage, so I could dump wheelbarrow after wheelbarrow of rocks into the hole. But once I had the grass in place, I needed special kinds of rocks for stairs, retaining walls, planter boxes, trim lines, flower bed terracing, freestanding walls, flower bed enhancement, ground surfacing, and special projects. Of course, all of these needs for rocks didn’t happen at the same time. They came over the last fifty years, and I’m still adding rocks here and there. 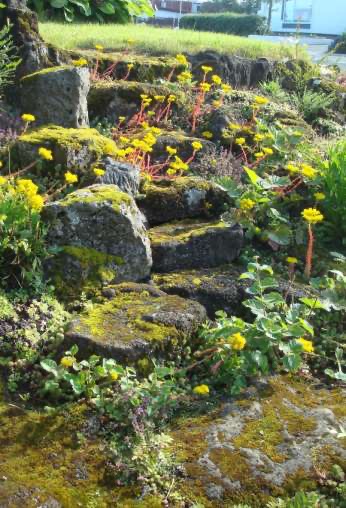 One of my first projects was stairs that I needed to put in place from the ground level up to the house level. This was about a 4-foot to 5-foot rise that required seven to nine flat, steplike rocks. Luckily, I live near the large park Heiðmork, which was formed from lava flows from nearby volcanos about 7,000 years ago. The lava shapes and sizes are endless. So I explored the area and found the rocks for four sets of stairways. I loaded the rocks into my car trunk and constructed stairways in the front and back of the house using 33 no-cost lava rocks. 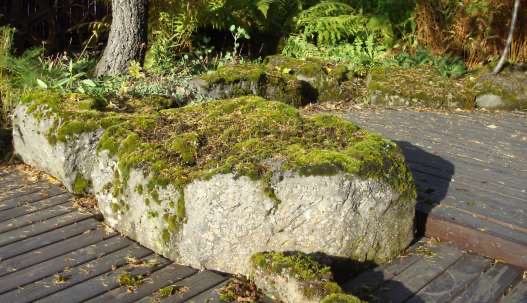 With my house being built on a street that has a slope, there was a need to have retaining walls between the different ground levels. In the backyard, there is a 2-foot drop that required a retaining wall between my property and my neighbor’s. Again, I was in luck, this time with a street project close by where huge rocks were being blasted with dynamite. The rocks were being trucked away, and I asked if they would dump a couple of loads in my backyard. They were happy to do so, and I wound up with big rocks that couldn’t be lifted. I spent the next few months moving these rocks into place using an 8-foot, 2-inch pipe as a lever and mixed sizes of rocks as a fulcrum to tip the rocks up and over from side to side until they formed a wall. I had some extra rocks that I used to outline a deck. A tree started growing in a hole drilled for a dynamite charge that is now 6 feet high. The project required 23 large rocks.

The retaining wall I needed in the front driveway was much easier to build. This time I found long, straight-sided rocks along the highway that I drove every day to my job at the NATO base. I would spot some rocks that looked good, stop the car, and load three or four long ones into the trunk. Together they made a solid wall of rock.

I had to use long, straight-sided rocks on the sides of two of the stairways. I also used these long, straight-sided rocks to build a retaining wall around the concrete hot pot that I built when the geothermal water was connected in 1978. Finally, I used a few more of these rocks for a small water pond that I made for the birds. It took 98 rocks to build all of these retaining walls. 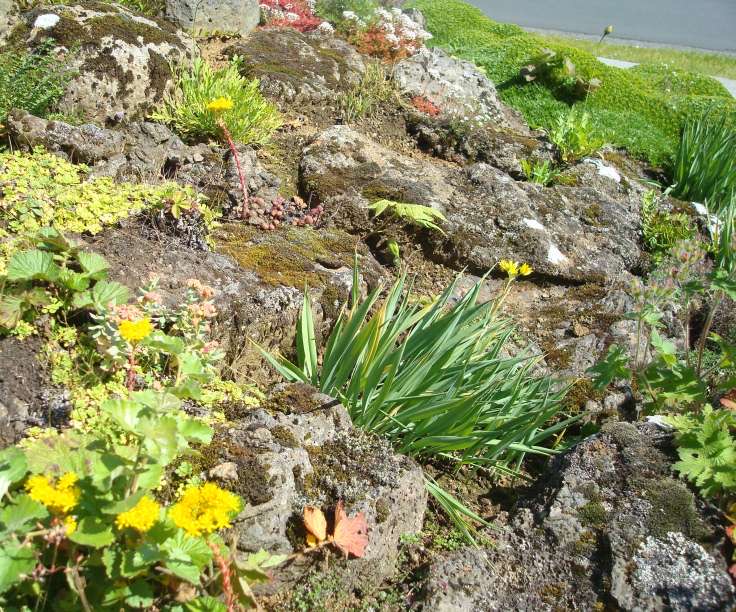 It was easy to see that I needed to slope the ground from the house level to the street level. This resulted in a slope that wraps around three sides of the house. I planted flowers on most of the slopes and used a mix of rock types to fill in for rock garden enhancement. I looked for rocks that had interesting shapes, colors, or lava flow ripples, or that were spotted with lichens. I gathered these rocks when I traveled around Iceland as well as from Heiðmork. I took 12 six-sided rocks from the top of a cliff on the farm Arnabæli, which I struggled to retrieve. I like these six-sided rocks and have taken them from Arnafjorður on the east coast and from a waterfall area. Total: 266 rocks. 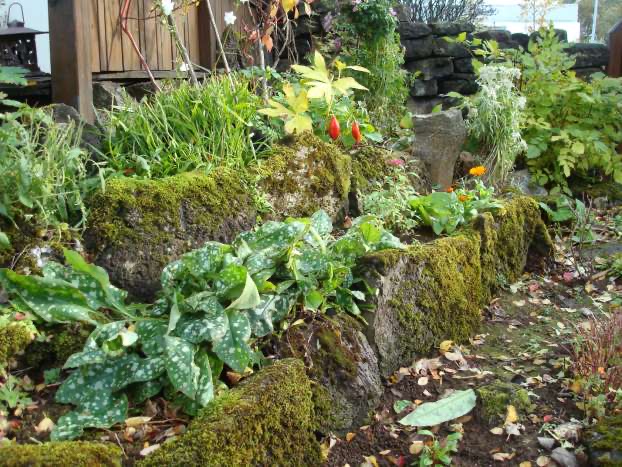 I needed to separate the lawn and the flower beds that I planned. So next came finding rocks with straight sides that were 6 to 12 inches high to terrace the flower beds. Again, I found most of these rocks along the road to Keflavik. I would load 6 to 10 rocks in the car trunk depending on their size. These rocks were used in long lines in the front and back of the house. Much later I removed a slope of grass and terraced the area for flowers, placing large flat rocks on their edges. It took many hauls because I needed 138 rocks to complete four flower beds. 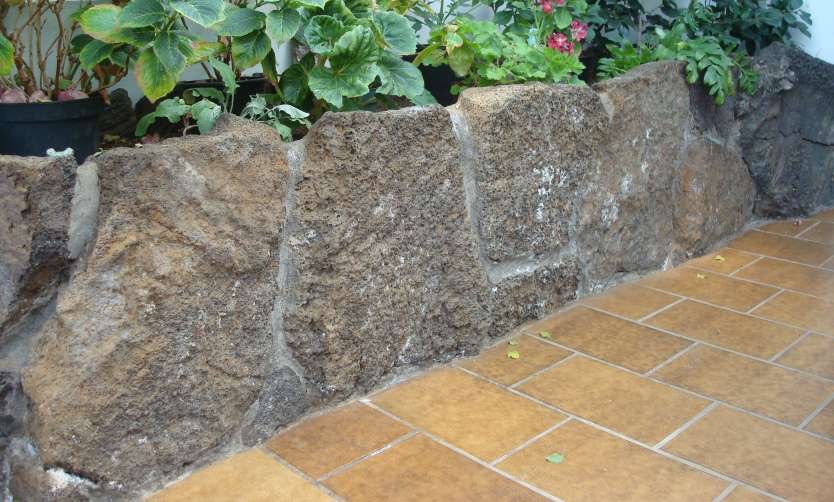 I enclosed a patio area with glass in 1970, which became our groður hus (greenhouse). With the greenhouse effect, the temperatures were suitable for dining and growing special flowers and succulents. I planned for two large planter boxes about 2 feet high. Finding rocks for this project took some time, since the heights and thicknesses of the rocks had to be about the same. This time I cemented the large, flat rocks in place. Twenty-one rocks did the job. 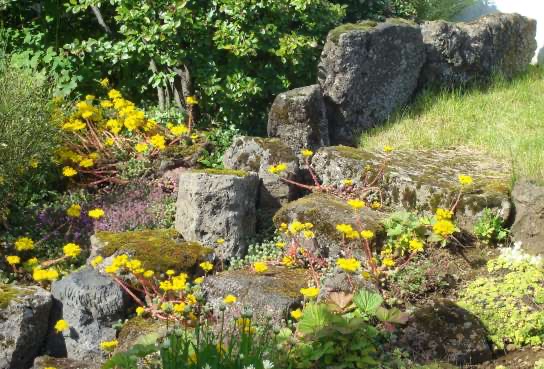 In the early days of starting the garden, I needed a freestanding wall to divide the garden in the front of the house from the backyard. I found large flat rocks that stood on their thick edge and also laid them flat. For the division, I placed the 20 rocks in a single line. 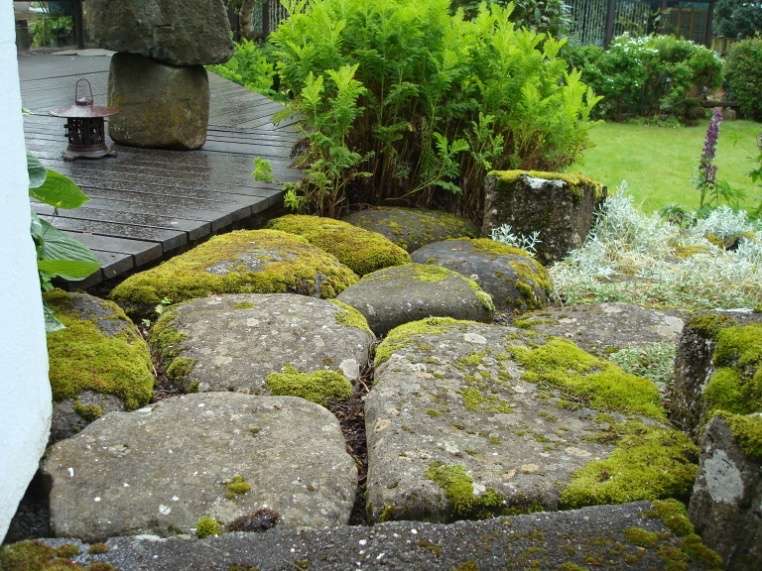 There are a few level places in the yard that needed rocks for flat areas. I went to the ocean shoreline to collect round, smooth rocks the size of pancakes but thicker. I filled an 8-foot by 8-foot space with about 250 rocks. Over time, thyme and ground-covering plants have grown over them. In another area, I removed a wooden deck and filled the space with 36 larger flat rocks that came from Heiðmork. I also filled a flat space at the top of a stairway with nine large smooth rocks that I found on the ocean shore. 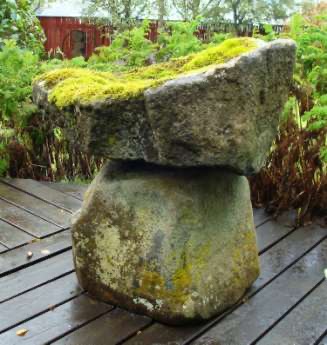 Then there are some rocks that stand on their own for various reasons, like this moss cushion seat.

As you can see, I don ́t really have a rock pile at Stekkjarflot 8. All of the rocks that I gathered are doing the special job they are intended to do. However, if I would pile all of the rocks together, all 996 of them, there would be one big rock pile. Whatever, I ́m happy that all of the rocks have found a new home.

We visited Tracy’s beautiful East Bay, California, garden last week, where we focused on her dry garden plantings of cacti, succulents, and other plants that thrive without supplemental water. Today…