It is the first weekend of May and we (the British) are about to enter what is known among gardeners as the Show Season.

Between now and August there are four huge Flower Shows organised by the RHS (the Royal Horticultural Society) and innumerable smaller plant fairs all over the country. Some are specialist, some are in the grounds of grand stately homes, some are selling plants grown by neighbours and sold very cheaply in aid of charity and some are just an excuse for a party and a large slice of cake.

It is a notable fact that keen gardeners, when not actually in the gardens going for it, like nothing more than visiting other gardens and shows. They meet up with like-minded people, see great plants and go home happy and heavily laden with new things for their garden. I am pretty sure that this is not a peculiarly British habit and the same is true of gardeners all over the world.

The first big show of the year starts next weekend at Malvern in Worcestershire*. I have been going to Malvern for about eight years now. I was first asked there to give a lecture in an empty cow shed. This was not the best place as it was cavernous, echoey and there was too much light for the pictures to show up well. In its favour there was no sign of the previous occupants and all was sparkly clean. Since then we have built a proper theatre in a marquee amongst the gardens where I cavort and talk and introduce eminent speakers. It is a really lovely few days.

The showground itself is a staggeringly beautiful location in the lee of the Malvern Hills (which mark the boundary with Wales) and with a view of the Cotswolds. On a good day the views are amazing and sky seems vast. The problem is that you can never tell what the weather will do (welcome to Britain!) and, over the years, during the show I have seen snow and hail, puddles of water up to my shins, fog and (one glorious year) it was the warmest place in the country. “Be Prepared” is the motto of not only the Boy Scouts but the British show visitor. 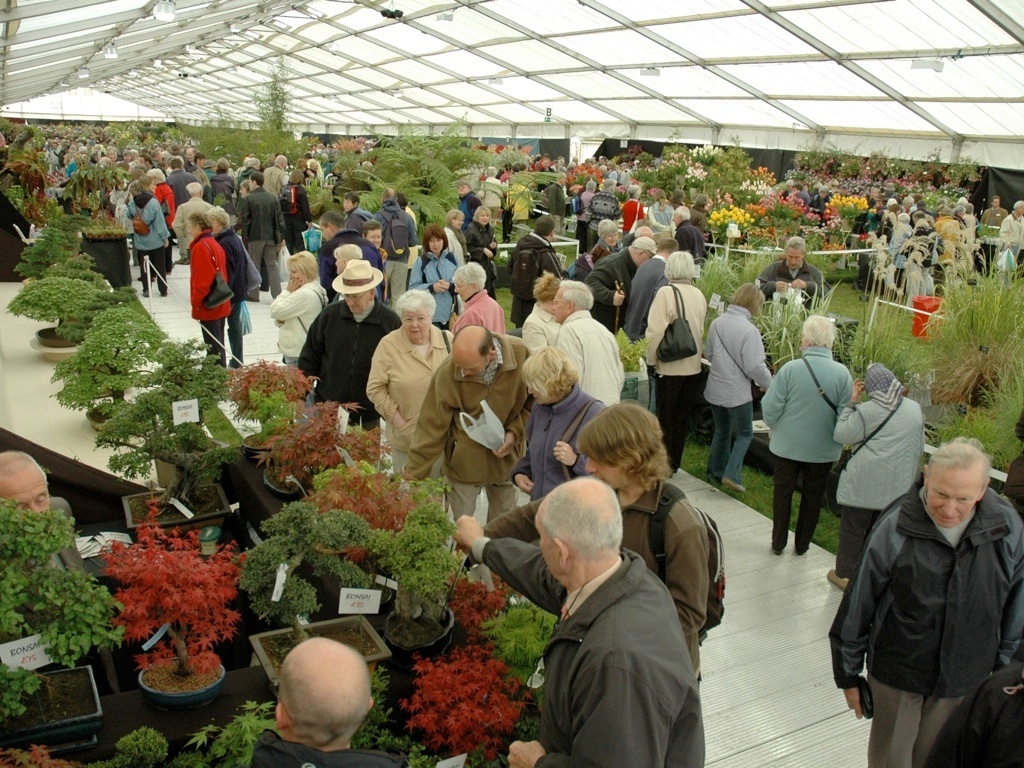 Over the weekend over 90,000 visitors will tramp through the gates to enjoy (among other things) a display of twenty show gardens which have been built over the past fortnight, hundreds of stalls selling sculptures, art, clothes and jewellry as well as garden sundries. A vast marquee containing a hundred of the best nurseries in the country and a great choice of different local food suppliers laden down with delicious cheeses, pies, cakes and cider.

We had a great time a few years ago when some British bloggers arranged a great convocation of garden bloggers from around the world. We had bloggers from all over this country and even some from the U.S. Sadly the weather was pretty vile but a jolly time was had by all.

It is quite an occasion but very friendly and informal – a bit of a contrast with the next show in the calendar, The Chelsea Flower Show about which I will write more next time.

There, a reason (if ever you needed one) to return.

* It is not, strictly speaking, the first show of the year as there was one in Cardiff a couple of weeks ago. It is in the grounds of Cardiff Castle, which is a pretty cool place, but is modest (though charming) in comparison to the others. It is a bit like a warm up jog before the main events.

How to Overwinter Tender Plants in the Northern Plains

Winter weather can be challenging for gardeners in the Northern Plains. However, we are still able to use cold-sensitive plants in our gardens if we take the necessary steps to…