It’s popular, but is it the best method for you?

I am not here to bash square foot gardening (SFG). Any system that has been encouraging people to grow their own food for the past 40 years should be applauded. I do think, however, that we need some perspective on the realities of growing fresh produce using this much-celebrated method. The concept of growing more vegetables in less space didn’t begin with SFG. Many attribute the basic tenets with the French, who planted a so-called “intensive garden” near Paris in the 1890s. Many years later (in 1981), hobby gardener Mel Bartholomew popularized the phrase “square foot gardening” in a book (photo, below) and his subsequent PBS television series. Using many of the same concepts of intensive gardening, SFG encourages people to build a square garden bed and, using a grid, divide it into 1-foot squares that are each planted with a different type of veggie. The method quickly became—and still is—hugely popular. There are several things that can occur when adopting this planting style, however, that might not leave a gardener as happy with his harvest as he had hoped.
See the principles of square foot gardening

There are several aspects of SFG that raise some red flags. Spacing is one. There is merit in growing some crops close together. If the spacing is set correctly, the plants can grow to where the tips of the leaves are just touching the edge of the adjacent plant as they mature. With intensive farming, this is planned for with certain species. It allows for more plants per square foot while providing shading for the soil, which limits evaporation and inhibits weed seedlings. Having your plants too close together, however, can have detrimental effects. Poor air circulation can create an environment ideal for disease. A dense canopy can keep leaves wet from dew longer because there isn’t enough air movement to dry them out. Single rows of plants or careful placement of like-size plants allows for more air movement. Powdery mildew, downy mildew, and botrytis are examples of vegetable-crop diseases that are exacerbated by poor air circulation.

In his book, Mel Bartholomew discusses the issues associated with single-row gardening and its deficiencies. Some of these detriments, according to Bartholomew, are the amount of space single-row production requires, the large amount of soil amendments needed, and the amount of seed used to plant the rows. It’s true that single rows take up a lot of space compared with the SFG method. A typical SFG box is 4 feet long and 4 feet wide, which equals 16 square feet. A single row that is 1 foot wide would need to be 16 feet long to equal the same amount of space. That’s not a deal breaker, but it is a consideration for folks who have limited space. But remember that one row doesn’t mean one kind of veggie. If you want to grow one tomato plant, two zucchini, four heads of lettuce, six pole beans, and a dozen radishes, they will fit just fine in a single row, as they might in a SFG box.

The claim that single-row gardens require adding a lot more soil amendments is likely true when planting in the ground. The SFG method, though, requires adding amendments (peat moss, vermiculite, and compost), too. And to avoid having to amend excessively, you can simply make a raised bed, build it up with compost, and plant it with single rows of plants. In addition, you don’t need to drop an entire packet of seed into a single row just because it is a single row. You can add as much or as little of the seed as you wish.

A single row does make things easier to reach. The narrowness allows for access from either side. When growing in a square box that can be 4 feet wide and deep, you have to reach across to get what’s in the middle; this might be an issue for some people. Also, single-row growing of vegetables (in the ground) does not involve purchasing lumber, measuring, sawing, drilling, and building raised beds. The cost is minimal in the long run, when compared with the investment needed to follow the SFG method.

Another area of concern is the root space for your crops. The SFG methodology ignores the importance of proper root growth. Most vegetable plants have exten­sive root systems. Some have taproots (like carrots) that, if interfered with, will be forked or misshapen. Shallow-rooted vegetables, such as cabbage, garlic, and lettuce, still extend their roots 12 to 18 inches deep. Beans, eggplants, peppers, cucumbers, and cantaloupe send roots 18 to 24 inches deep. Tomatoes, parsnips, watermelon, and winter squash go even deeper (2 to 3 feet). Obviously, the 6-inch-deep raised beds recommended by the SFG method don’t offer enough growing space for optimal plant health; the ground beneath is often too compacted (or not amended enough) to encourage the roots to reach down deeper.

The square foot gardening book advocates using landscape fabric or some other impene­trable barrier at the base of your raised beds if you’re placing them on a driveway or other man-made surface. Again, doing this would inhibit growth when roots try to move down into the native soil but can’t. They hit this barrier and are forced to move elsewhere. This, in turn, can affect plant health and productivity.

Extra fertilizer might be needed to get the best harvest

Plants need sufficient nutrients for growth, and vege­tables are no exception. The SFG method recommends a strict recipe of compost, peat moss, and coarse vermiculite—and claims that’s all that is needed—to fill your planting beds. Although compost provides a fair amount of some nutrients, heavy feeders, like tomatoes, peppers, and squash, usually need extra nitrogen. Successful vegetable farmers add fertilizers based on a specific plant’s needs, and vegetable crops can require a lot of fertilizer. Composts made from animal manure or legume cover-crop residue can provide the higher nutrient rates needed. Food scraps, lawn clippings, and leaves (common components in backyard compost) can provide some of the nutrients in the short run but usually not at the levels required for optimal productivity.

There are pros and cons of any system used for growing vegetables. A lot depends on soil type and condition. Any system, however, that encourages disease, inhibits proper growth, and ignores nutrient needs likely isn’t the best method to follow. Plants have an extensive root system for a reason: to take up nutrients and water effectively and efficiently. Limiting root growth or overcrowding plants doesn’t favor optimal growth and productivity. If having a pretty garden is your main goal, the SFG method does create attractive grow boxes that might be worth the expense. But when the goal is producing high-quality vegetables, there are alternatives—and even ways to hybridize a raised-bed system with deeper sides—that are more effective.

What’s good about the SFG method? 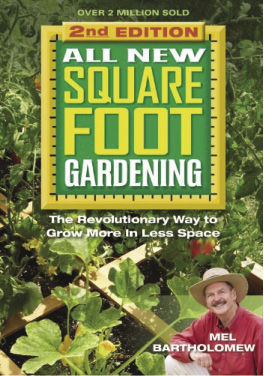 Square foot gardening (SFG) does have several redeeming qualities that shouldn’t be ignored:

• It raises awareness. No one can deny that SFG has gotten a lot of people to think about growing some of their own food. This might also lead to a better understanding of what farmers have to go through to raise the vegetables that folks buy at the store and why veggies might cost as much as they do.

• It is approachable for beginners. The SFG steps are easy to follow: You build a small-scale version of a raised bed, purchase the recommended products and soil amendments, and place plants close together to reduce weeding.

• It encourages building raised beds. Elevated boxes are generally good for drainage and aeration. Growing in the ground, in a more traditional sense, requires turning over the soil (in the lawn area or elsewhere) to make it ready for planting; that can be physically taxing, especially if the sod is thick, the soil is full of clay, or the ground is compacted. Additionally, raised beds can be attractive.

• It advocates record-keeping. The SFG method asks folks to take gardening notes. This is crucial for correcting issues in subsequent seasons (perhaps you watered those lettuce seedlings too much and they rotted) or for remembering what things worked well (you put tomatoes at the back of a bed to enable easier trellising).

Tap here to find out which tried-and-true vegetable-gardening books our expert recommends (and why).

Robert Hadad is a vegetable specialist and extension educator at Cornell University in Ithaca, New York. He previously worked for the cooperative extension services of North Carolina State University and of the University of Kentucky, and he owned his own farm in Rhode Island.

Photos, except where noted: millettephotomedia.com.