When the Fire Ants Take Over: Effective and Less-Toxic Solutions

There are several harbingers of warmer weather in the Southern Plains: blooming wildflowers, freshly mowed lawns, and, unfortunately, the appearance of fire ant mounds. Nothing quite says “Summer is coming” like fire ants. Fire ants like to bite (and hang on) and then sting from the abdomen, injecting a toxic alkaloid venom called solenopsin. Each sting brings welts or pustules and can cause an infection, an allergic reaction or, in rare cases, death by allergic reaction. Unlike other ants that may sting only once, one fire ant can sting multiple times, which makes it acutely dangerous to small children and pets—as well as a painful nuisance to the rest of us. The good news is that there are effective strategies for dealing with fire ants that don’t require a lot of work or a lot of money. These methods are on the safer side for people and other animals, too.

The red imported fire ant (Solenopsis invicta) makes large mounds with no visible entrance. Often you’ll see several mounds crop up in your yard after a rain during the warmer months. There are several general approaches to dealing with fire ant mounds. My favorite is the one recommended by the Texas A&M AgriLife Extension Service, which is called the two-step method. With this approach, you do a broadcast application of granular bait followed by a selective treatment of individual mounds a week or so later. This approach works for both large-scale commercial/agricultural use and for small-scale homeowner settings.

Granular fire ant bait consists of a pesticide (or two) carried on corn grits, which is picked up by worker ants and carried back to the colony, where it kills or sterilizes the queen. The bait is fairly slow-acting and contains just a tiny amount of toxin. It is broadcast over the area with a handheld seed spreader set on the lowest setting, with most baits requiring just 1 to 1.5 pounds of product per acre. This means that the average homeowner with a quarter-acre lot will only need a few ounces of granular bait. The bait will hardly be visible on the ground at this rate, which makes it very unlikely to be discovered by pets or children. Apply bait when no rain is expected for at least 24 hours and temperatures are warm.

The active ingredients in fire ant baits include spinosad (FertiLome Come and Get It!), abamectin (Ascend, Award II), hydramethylnon (Amdro, Maxforce), and the slower-acting insect growth regulators methoprene or pyriproxyfen (Distance, Esteem, or Extinguish). Fire ant baits containing spinosad or methoprene are considered so low in toxicity that they are approved for use directly in vegetable gardens. 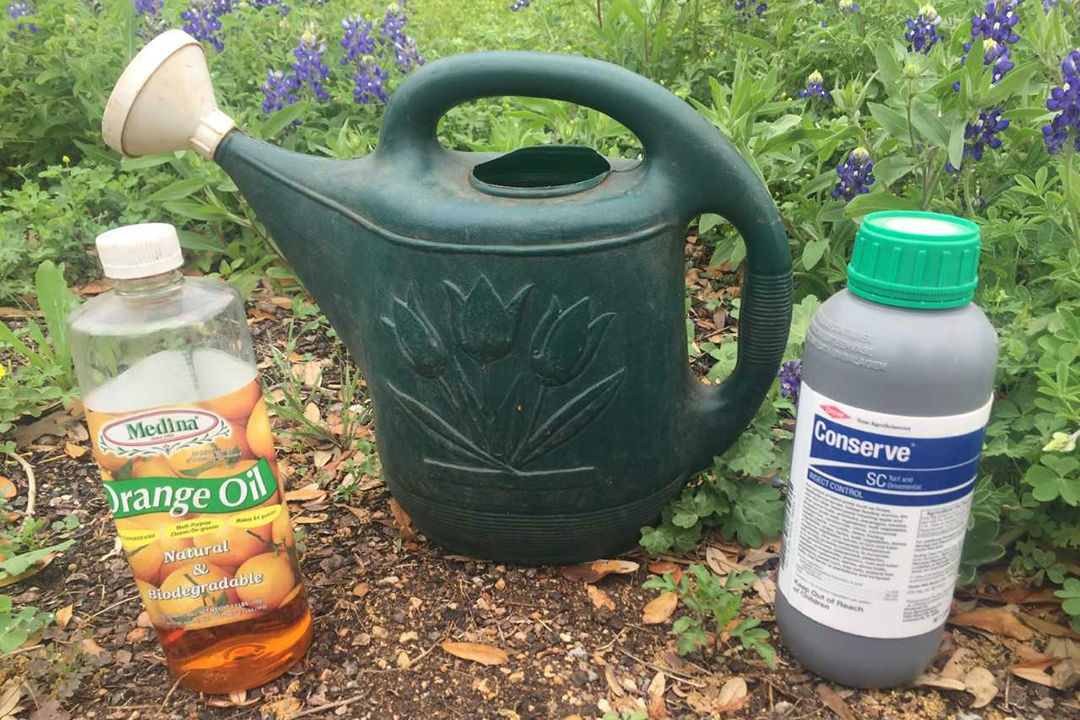 The second part of the two-step method is selective treatment of individual mounds. This is best done with a drench. For very small-scale situations, especially those where pesticide toxicity is of high concern, the drench can simply be 3 gallons of boiling water poured directly on the fire ant mound, which has been shown to be about 60% effective. Another low-toxicity drench is a diluted solution of d-limonene, which is simply orange oil. I have found orange oil to be effective at treating individual mounds, but the oil can “burn” grass or other plants around the ant bed, especially in hot weather, so exercise caution. Other drenches use the same active ingredients as the granular baits, such as the Conserve drench, which is spinosad-based.

If you only have a few mounds, you may choose to treat the mounds individually with a drench. If you have more mounds, you’ll be better off doing both parts of the two-step method. The best time to spread the granular bait is in the spring or fall, or both, with fall applications helping to control fire ants the following spring.

Karen Beaty is a horticulturalist at the Lady Bird Johnson Wildflower Center in Austin, Texas.