A few years ago, in an effort to try to help dwindling butterfly and bee populations, my partner Mikel and I plowed up an acre of invasive bittersweet on the edge of our coastal Rhode Island home to create a sunny pollinator garden. Rather than designing a wild-looking space that might look messy to some, we thought a larger, more interesting challenge might be to create a more stylish garden that could nevertheless still help buoy insect populations. We asked ourselves, should our space look like a naturalistic meadow, or like a more-polished perennial border? Deep digging into garden literature resulted in the pollinators themselves answering this question.

The first spring in the pollinator garden we planted more than two thousand plugs and were itchy to see results. But not much insect activity happened at first. Plants were small and the insects just hatching. By August, however, we were starting to see action. Some plants constantly attracted pollinators, but many just attracted occasional customers. Here are some of the top insect magnets we’ve come to love over the succeeding years. Read more

Plant placement is just as important as plant choice 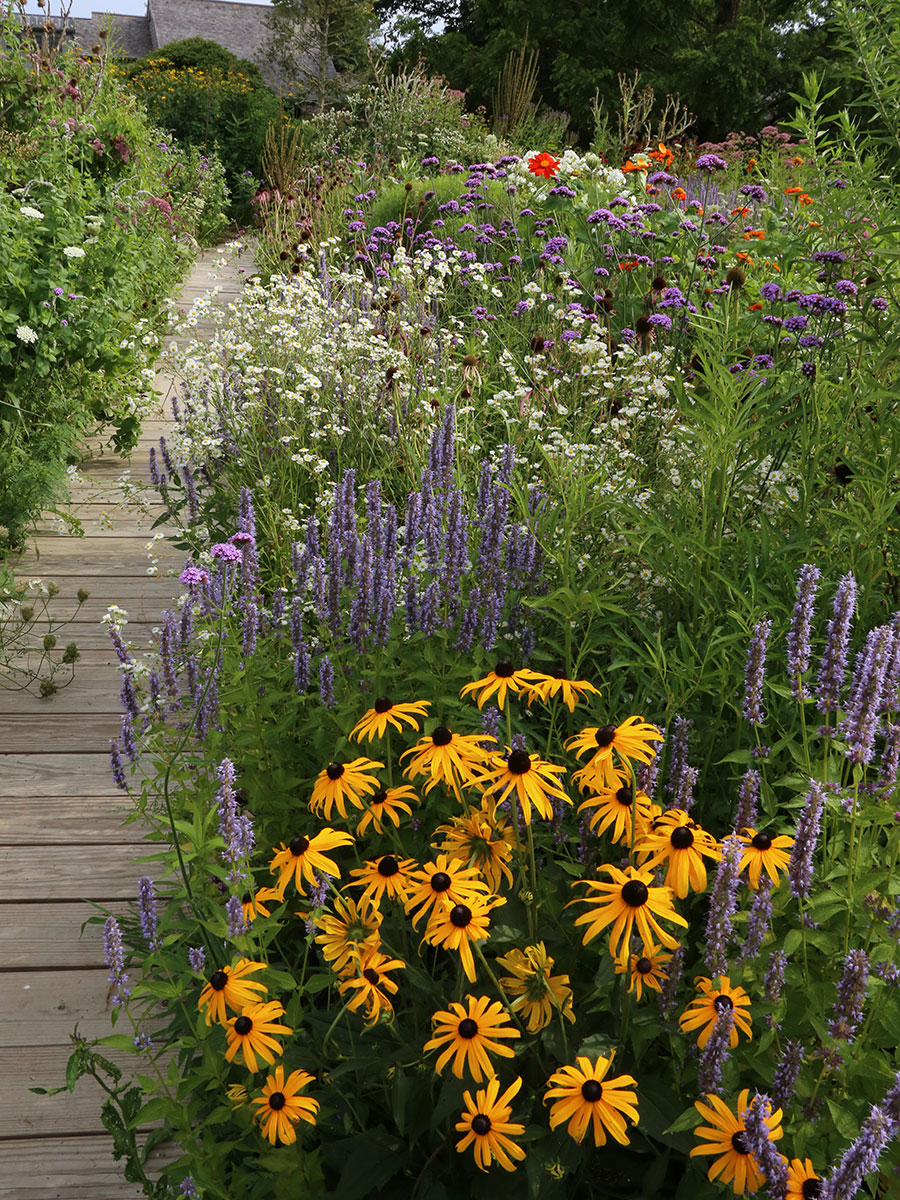 We humans tend to have preconceived notions of what wild insects might want—a softly romantic “millefleur” style consisting of a grassy meadow scattered with many dots of different, colorful wildflowers. Research shows, however, that insects prefer not to have to search widely for high-energy nectar, so an expansive wildflower-sprinkled meadow is not ideal. Flying uses a lot of energy. Instead, pollinators prefer adjacent groupings of their favorite plants because it shortens their commute.

In our garden, for insects’ easy nectaring, we opted for massed plantings. Mostly using herbaceous perennials, we imagined that the whole would look more like a giant herbaceous garden than a meadow. Within the groupings we made sure there was a mix of nectar plants along with caterpillar host plants, and we placed the selections so that taller, wispy species could be supported by lower, bulkier partners. The partnerships create a network of plant scaffolding (photo below). While we prefer using mostly natives, many of the insects’ favorite nectaring plants turned out not to be native. We ended up calling the new garden “pollinator plus,” as we didn’t limit our palette to only pollinators’ plants.

A Hole in Every Host Plant

Many gardeners want immaculate foliage, but to us perfect foliage means there aren’t enough caterpillars munching leaves to produce the diaphanous moths and bright-colored butterflies that we want. Many folks have lost the connection between the butterflies and moths they want, and the need to grow host plants for the larvae of those same butterflies and moths. Read more

Make sure there is a defined way in and out

We loved the idea of walking into a colorful pollinator perennial border and getting fully immersed into the realm of flowers, a world abuzz with the purr of innumerable tiny insect wings at work. Outside distractions, appointments, and troubles would be forgotten. We wanted visitors to be drawn down a seeming maze of narrow paths winding through masses of flowers.

The site we chose for the pollinator garden was on a sunny hilltop, flat and almost square, so a symmetrical design seemed right. We designed a square garden with a small lawn at its center, surrounded by three rows of 8-foot-wide planting beds with—initially—narrowly mown paths only 30 inches wide sandwiched between. (Two-sided beds make weeding easier.) We chose narrow walkways between plants to give visitors an intense visual experience. There’s a feeling of intimacy when you can really get up close to the plants and insects.

After a year or two, the immersion began to work as hoped. As the plants grew taller, we walked the paths and were engulfed in flowers. Getting lost on turning paths enticed us deeper, through changing mixes of plants and different color and texture groupings surrounding each path. We didn’t mind the occasional Maximilian sunflower (Helianthus maximiliani, Zones 4–9) or black cohosh (Actaea racemosa and cvs., Zones 3–8) leaning overhead because it made us feel a part of the garden, especially when butterflies or fearless hummingbird moths zoomed by.

Yet we weren’t totally happy. It seemed the entire garden could look more stylish. Everything was “soft”—the plants, turf paths, and even the distant tree line. We felt the whole garden needed the contrast of a crisp edge or something architectural to look its best. So we installed a floating doorway entrance, dug out the sod footpaths, and installed narrow wood boardwalks, a paving solution used elsewhere in the older woodland section of our garden. To maximize the sense of landscape immersion, we did not take the easy route of placing the boards just on the soil surface. It was much more work, but we dug the walks down into the earth, so our feet are 8 inches or more below the planting beds. Now we can look butterflies in the eye. 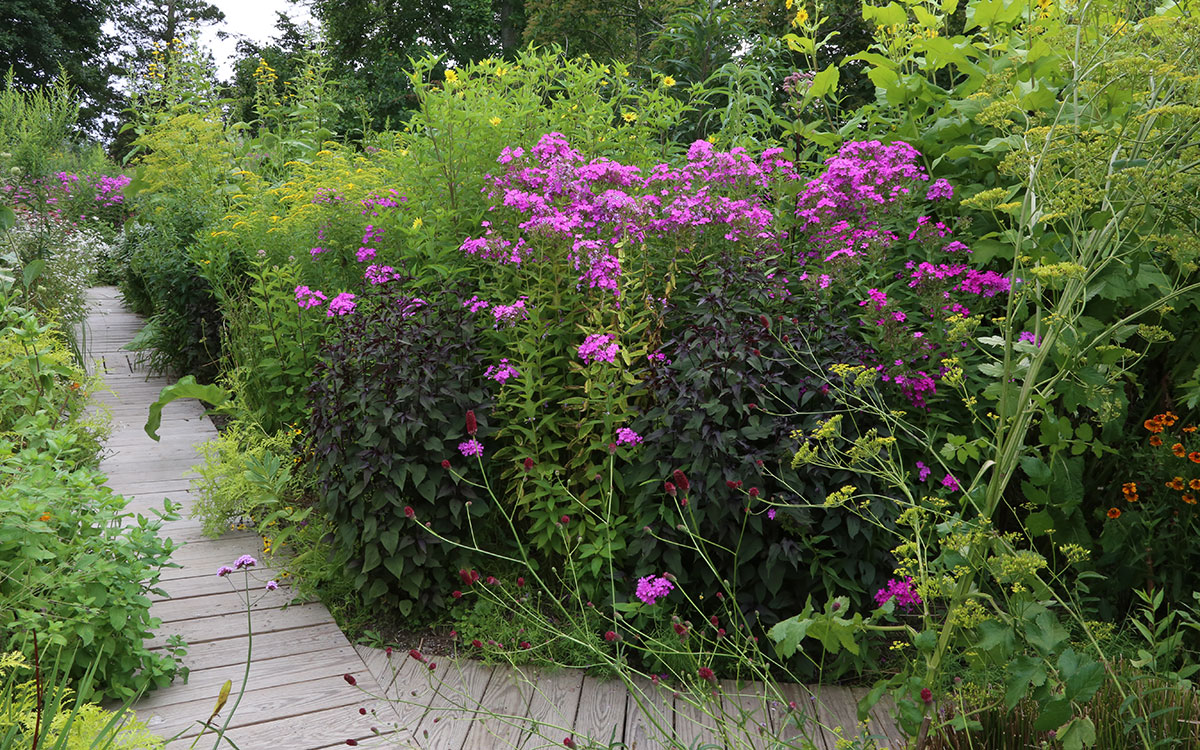 Provide a place for the eye to rest

Much like a cottage garden, pollinator gardens are usually thought to be wild looking. Along with grouping the plants in a more organized fashion and installing defined wooden paths and an entry, we made sure to incorporate a few static elements so visitors would have a place for their eyes to rest. One such element is the small patch of turf at the center of the garden, which breaks up the intensity of the plant-heavy borders. On this lawn we installed carved West African columns in a dark brown, which add a stylish accent to the scene and also help draw the eye to a resting place. There are also sculpted Japanese hollies (Ilex crenata* see invasive alert below, Zones 4–9) scattered in some of the borders, and occasional furniture along the paths. They add a little definition to the bursting borders and provide a visual pause. Even masses of ornamental grasses act as visual breaks. Having places for the eye to rest in this raucous garden makes visitors feel more at ease.

Next year’s goals are to phase out some low-performers and add more insect favorites, plus add more loose stone walls to create opportunities for native bees wanting dry places for underground nests. We also will move many plants around for better color combos and textures because gardens—even ones for pollinators—are never done. 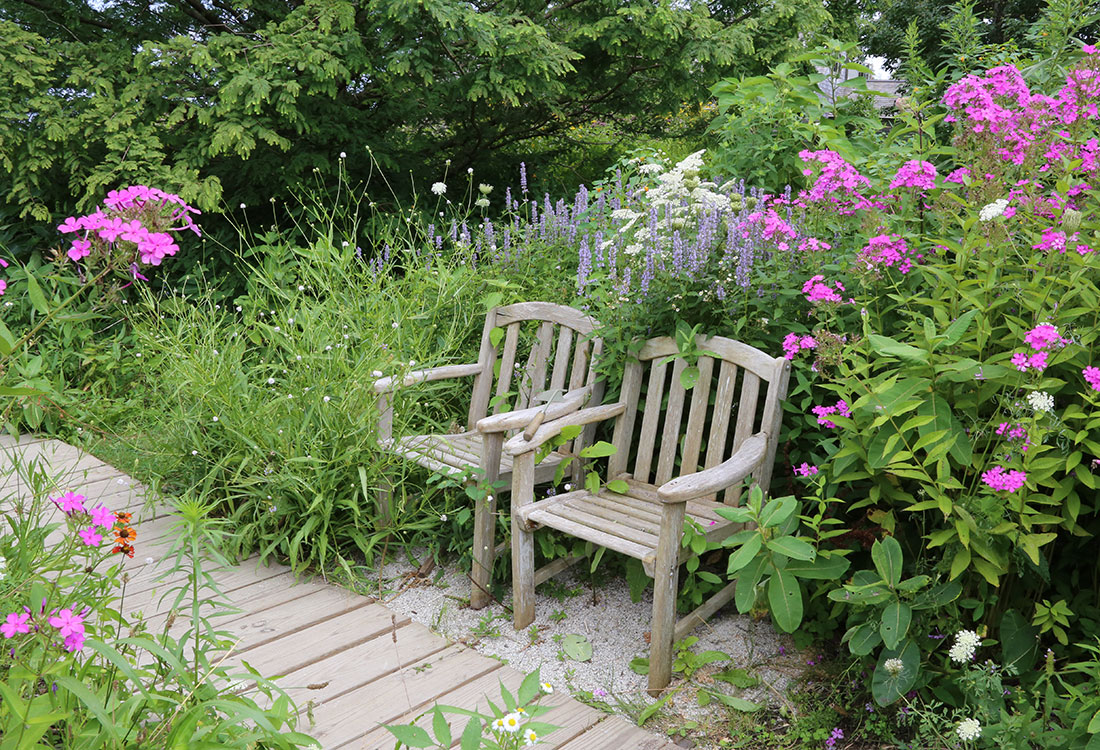 The plan: A pollinator paradise

This garden sprang out of an abandoned corner of the property that was overrun with invasives. Within just a few years the spot went from a mess to a bustling meeting space for bees, butterflies, parasitic wasps, and innumerable hummingbirds.

A few additional things (aside from the plants) can ensure a bustling pollinator garden: 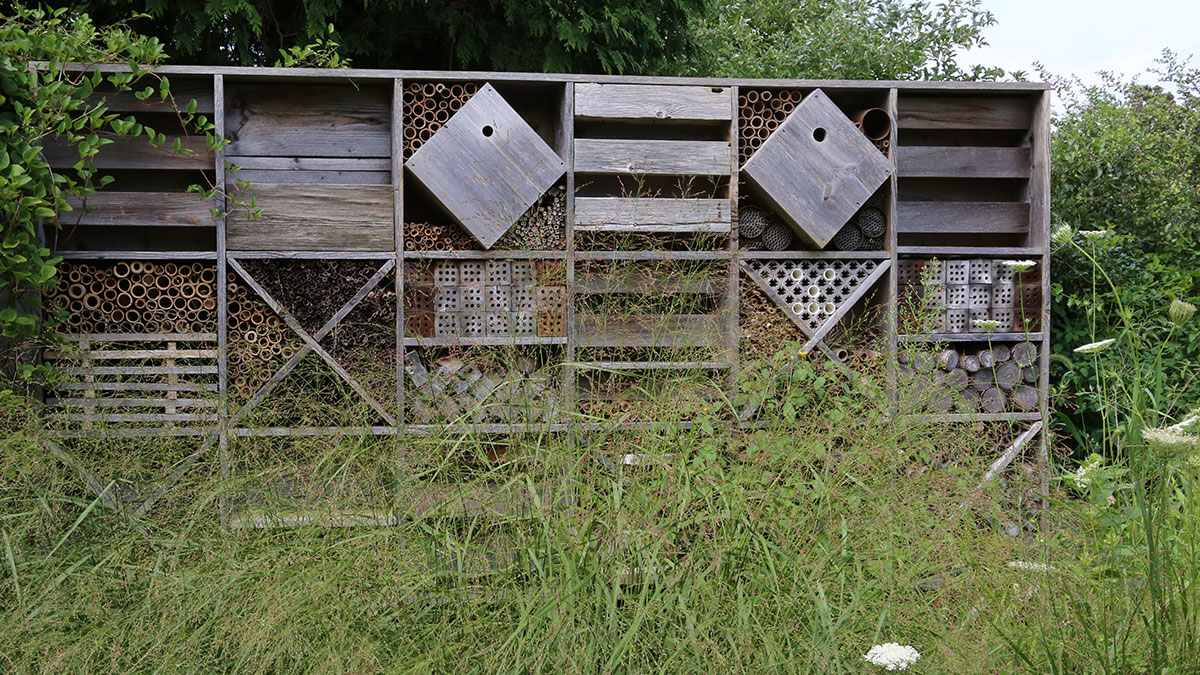 This plant is considered invasive in NJ, TN

John Gwynne is a landscape architect who splits his gardening time between New York City and Little Compton, Rhode Island.

Photos, except where noted: Danielle Sherry.