Dare to Divide Your Peonies

It’s easy to make more of these pricey perennials

Would you like to have a few more peonies in your garden but hesitate because of the cost? If you already have a large herbaceous peony, you can divide its roots to get more plants without spending a dime. Herbaceous peonies (Paeonia cvs., USDA Hardiness Zones 3–8) are long-lived perennials that can be divided to yield clones (or, literally, pieces of the original) that grow into individual plants. Divide peonies in fall to allow the divisions time to grow and establish themselves in warm soil. But don’t try this technique on intersectional or tree peonies, which are propagated by slightly different means.

1. Dig out and prepare the peony 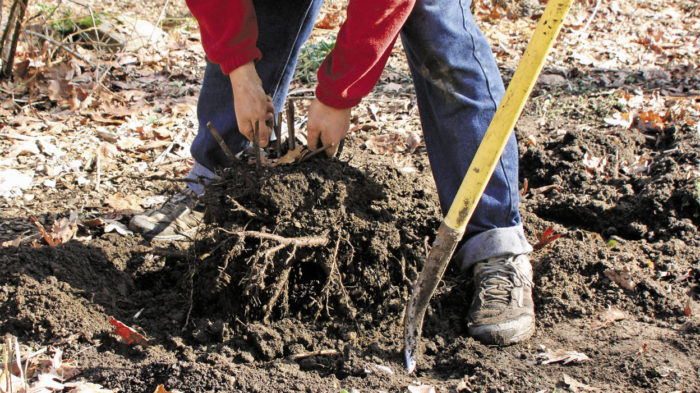 Wipe down your tools using an alcohol-dampened paper towel or rag to kill harmful viruses or fungi that might be lingering on the tools. Cut the plant’s stems to about 8 inches tall, and dig around the plant’s drip line. (The drip line is equal to the diameter of the fully opened foliage.) Shovels work, but digging forks lessen root breakage. Get under the clump, and gently pry it upward. Once it comes loose, use the stems as handles to ease the clump from the ground. Freshly dug roots are brittle, but don’t worry if some break off.

Wash the dirt off the peony, and let the plant sit under a damp towel or a tarp overnight. This makes the roots softer and easier to cut. 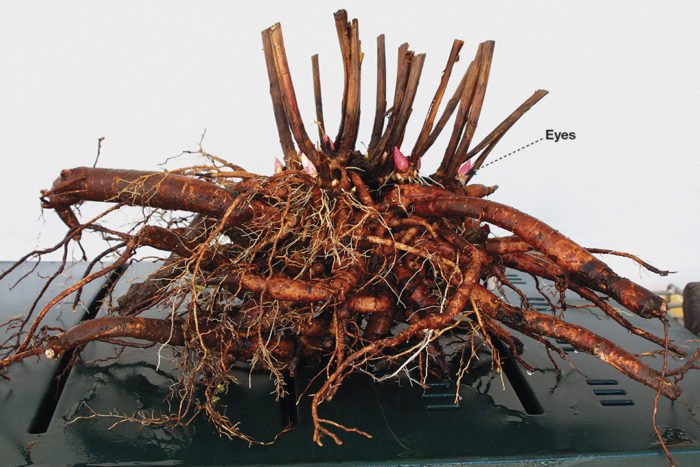 The next day, cut down the remaining stem lengths so that you can clearly see the peony’s eyes and roots. The eyes are the pink conical buds on the crown of the plant, which grow into stems and, poten­tially, into flowers. You’ll need to keep ample roots on each division. If there are too many eyes on just a bit of root, the plant will be unbalanced and will struggle to survive. 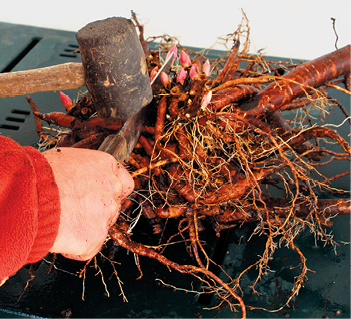 Using a pruning saw or a rubber mallet and an old chef’s knife, cut through the tough portions of the crown as you make your first cuts. A cut down the middle is a good way to begin. Gently pry the pieces apart.

At this point, you need to decide how many divisions to make. It all depends on what you want: a maximum number of small plants or a few larger plants.

You may want to keep these as two large halves. They will take a year or two to return to mature bloom but will likely put out flowers the spring after division. If you divide the plant into more than two, make sure each division has at least three eyes and a 6-inch length of roots to sustain it. Plants this small will likely not bloom the following season and will take a few years of growth before they return to normal flowering. 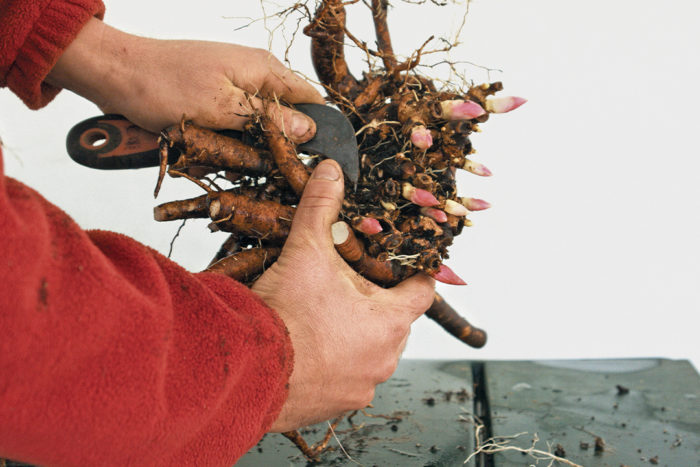 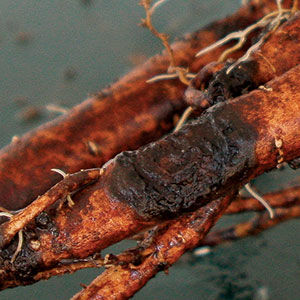 When you are satisfied with the number of divisions you have made, clean them up. Use a scraping tool (photo, above) to remove black-rot lesions (photo, right). Or use hand pruners to completely prune off roots that are more rotted than not. Favor small roots over old, fatter ones to encourage growth. 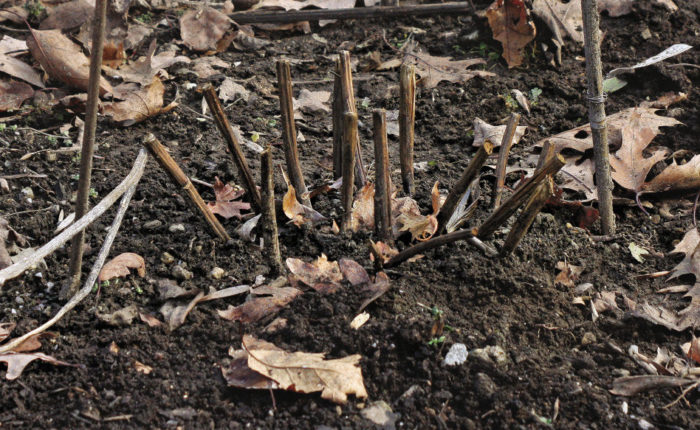 Herbaceous peonies prefer full sun and well-drained soil. Their eyes should be no more than 2 inches beneath the soil, or else they may have trouble emerging in spring—if at all. If the weather is dry, water once a week in their first spring and summer to get them off to a strong start. In cooler climates, mulch with leaves to prevent frost heaving in winter.

Tip: Dispose of old peony leaves, stems, and roots away from the garden. Leaving them to decompose in the garden or compost pile lets harmful fungi colonize and spread further.

Photos, except where noted: Antonio Reis