A Garden that Plants itself

Take advantage of self-sowers for a gorgeous, ever-changing design 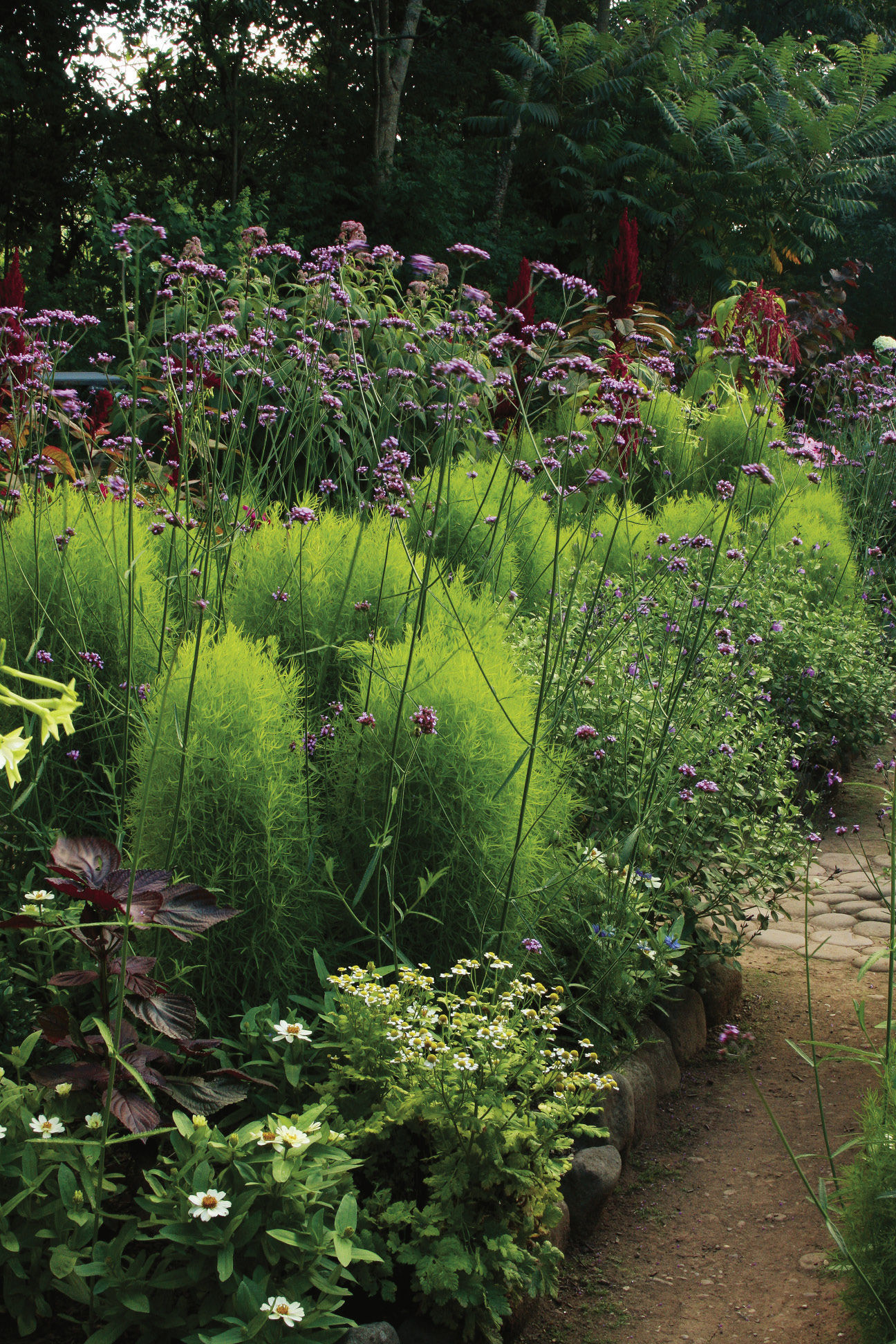 The Garden in a Nutshell

Soil: Clay loam amended each year with compost and manure

Biggest Challenge: Staying on top of the thinning in spring

Biggest Reward: A familiar but different garden each year 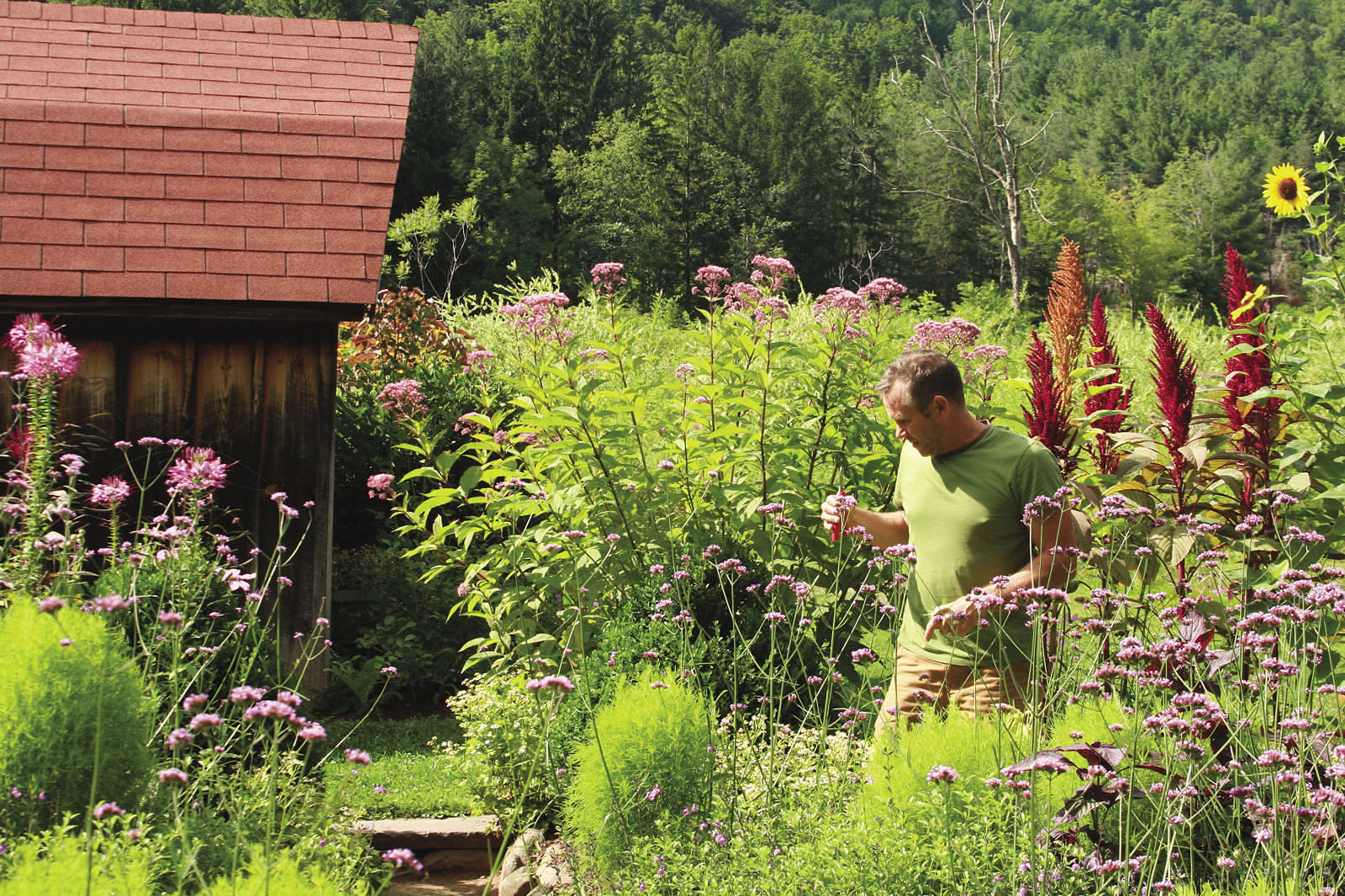 When I left New York City 20 years ago and moved upstate to the Catskill Mountains, I couldn’t wait to make a neat, orderly garden in which to grow salad, string beans, and bright flowers for the table. For a few years, I stuck with growing a mix of edibles and ornamentals. But then I designed a large kitchen garden for a client nearby that provided plenty of food for us both, so I phased out veggies at home. By then, many of the simple annual flowers I had introduced to my garden had begun to settle in and self-sow from year to year. I loved how these “volunteers” popped up in unexpected places and helped soften the formal layout of the garden. And I began to notice how they almost always outshone store-bought transplants, which sometimes failed to thrive no matter how much care and attention they received. The self-sowers, in addition, tended to be more pest resistant and drought tolerant. Plus, they were free and required no digging.

A limited palette of plants and careful editing in spring keep this garden visually cohesive yet abundant.

The garden today is a rich storehouse of seeds. Each spring, thousands of seedlings emerge and carpet the beds. My job, beginning in early May, is to gradually thin and edit. It seems a daunting task at first, but I’ve learned not to get overwhelmed. I weed as I go, but this is a remarkably weed-free garden as I’ve been diligent over the years in not allowing weeds to get established, set seed, and fling their progeny about. The overall plant palette is limited, allowing for repetition, which in turn creates a soothing and balanced rhythm among the plantings. In a garden of self-sowers, one never knows for certain which plants and which colors will dominate from one year to the next. The informal, tapestry-like effect is always slightly different; and some years, it’s better than others. But whatever the case, I can always count on the strong bones of the garden, coupled with some carefully placed, clipped and stately boxwoods, to lend order and symmetry to the seasonal profusion of color, texture, and scent. And I can always count on being amused, delighted, and surprised by the pluck and spontaneity of plants that plant themselves and ask only to be admired.

A Simple Formula for a Self-Sown Garden 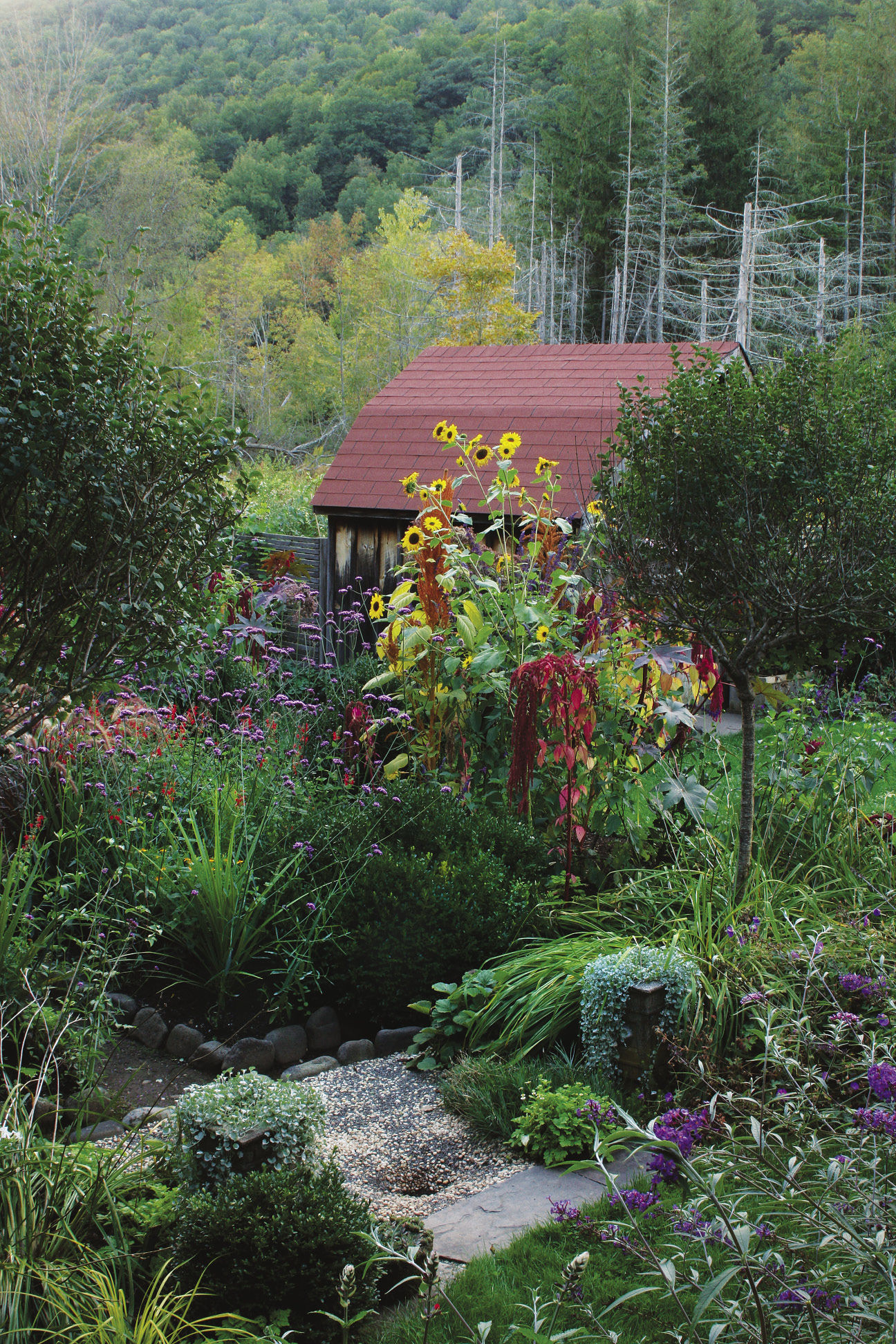 My garden is set up as a simple four-square design consisting of 11 raised beds, a circular centerpiece, and narrow earthen paths. Eight boxwoods (Buxus ‘Green Mound’ and ‘Green Mountain’, Zones 5–8) inhabit key places to accentuate the garden’s structure and to give it some evergreen gravitas. A scant few peren­nials, such as lady’s mantle (Alchemilla mollis, Zones 4–7), Joe Pye weed (Eupatorium purpureum, Zones 3–9), and ‘Prairie Glow’ brown-eyed Susan (Rudbeckia triloba ‘Prairie Glow’, Zones 3–11), have been allowed to creep in and speckle the outer beds.

▶ Self-sown annuals and perennials are an ever-changing tapestry

The garden consists mainly of a limited palette of tough, drought-tolerant, and vibrantly colored self-sowing annuals. I limit the variety so that there is plenty of room for each type of plant to be repeated among the beds, maintaining a sense of continuity and order.

▶ Store-bought annuals and seeds fill in the gaps

Each year, after the final self-sowers are thinned and established, I add store-bought transplants—zinnias, marigolds, salvias—to fill any gaps. Some years, about mid-May, I push sunflower seeds into the outer beds and nasturtium seeds among the bushy plants in the inner beds. My aim is to cover the ground and to see all the plants weave together into one great tapestry.

A Year in the Garden 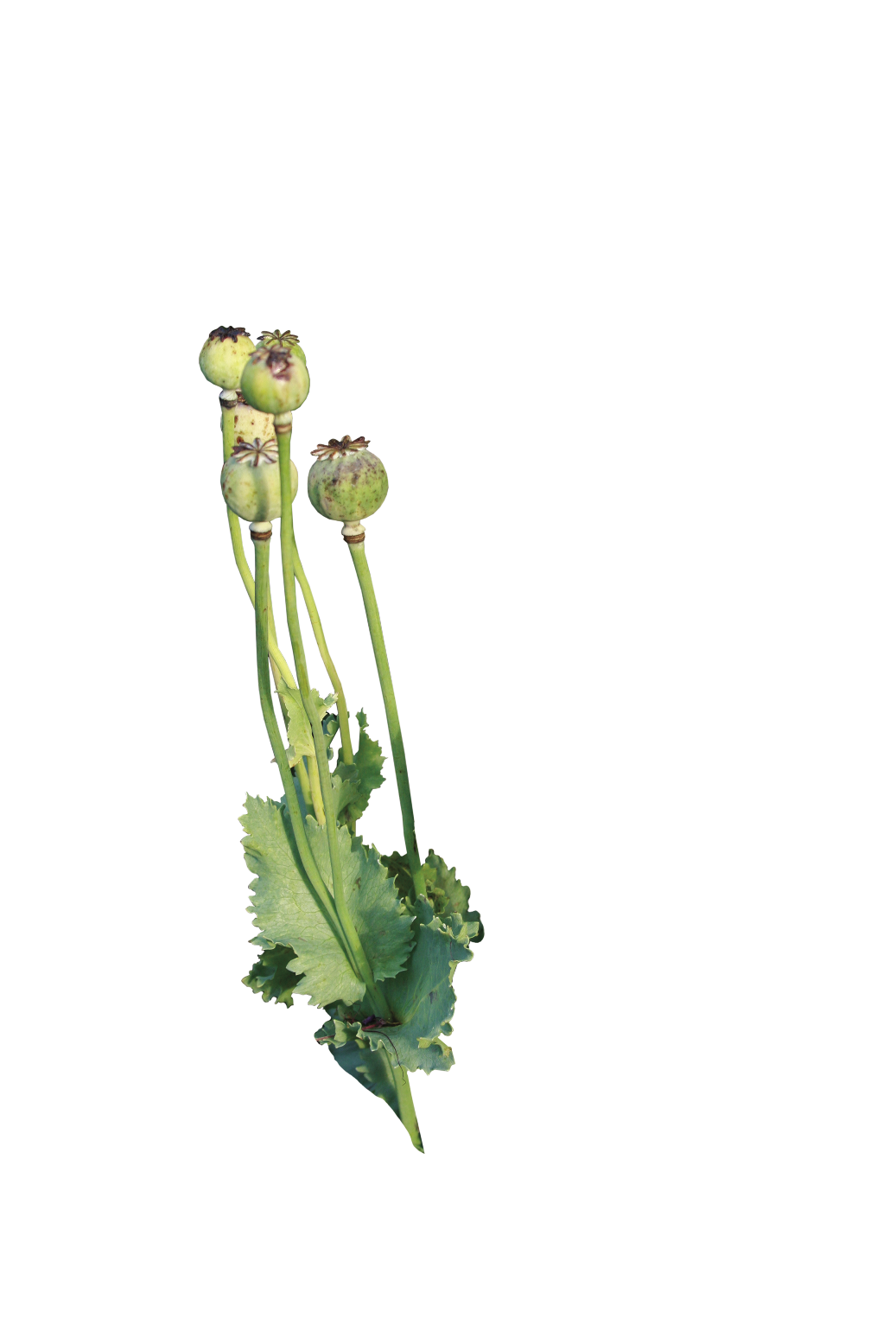 Like most gardeners, I continually rethink and change my gardens, and I love the thrill of planting new things. But in this garden, the process is simplified and the work of planting is almost eliminated. Change happens naturally because I don’t have to think about placing plants; I simply have to remove the ones that don’t belong. Like a good editor, I nurture the garden’s voice and let it tell the story.

The gardening year begins in April, when I clear away winter debris, tidy the beds, and sweep the earthen paths. It’s always a pleasure to see the new, clear, blank canvas each year. Near the end of the month, I shear the boxwoods just as they’re breaking dormancy and showing new growth.

May and June are the only high-maintenance months. In May, the seedlings begin to germinate rapidly and the thinning process begins. I start by choosing particularly strong individuals and giving them room to breathe and grow by eliminating all seedlings within a few inches around each one. The thinning process continues into June, requiring less than an hour of work per week. In mid-June, I fill any gaps with store-bought annuals. 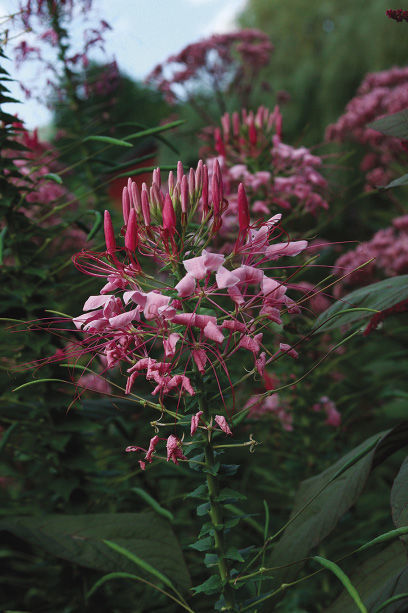 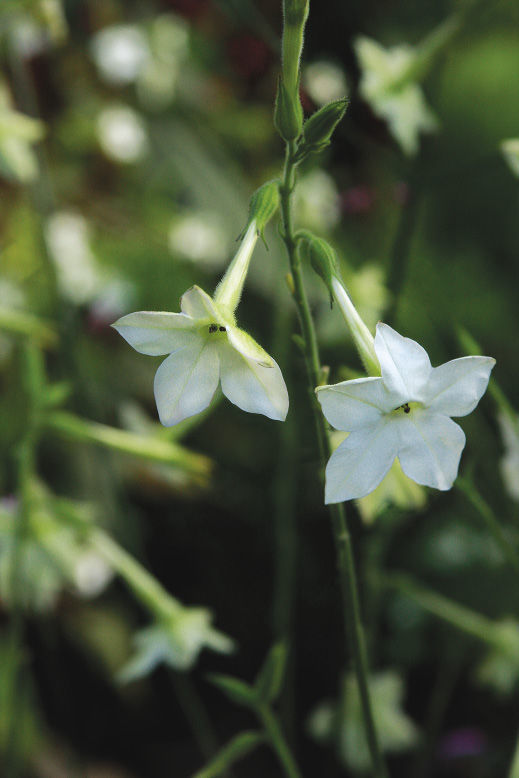 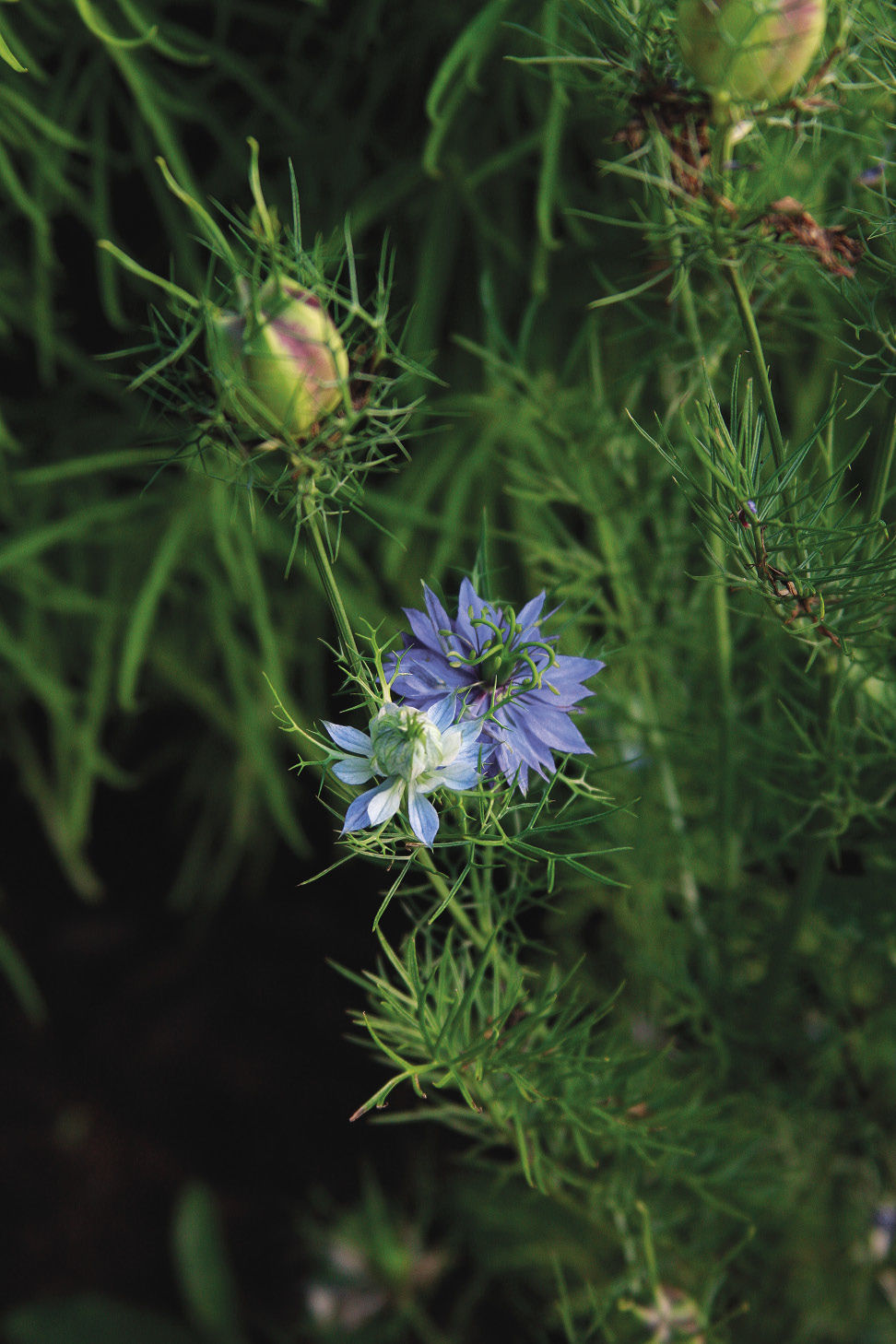 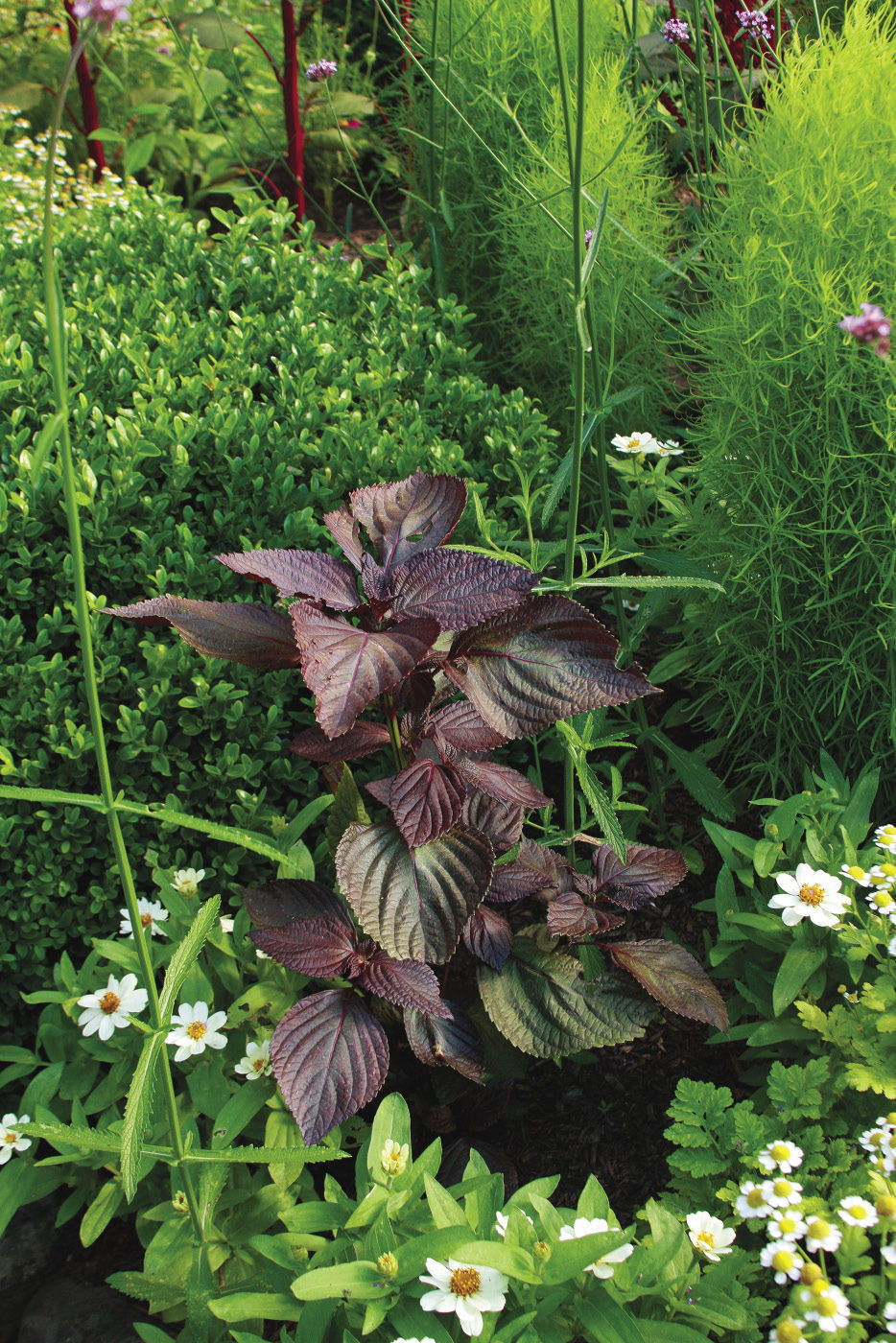 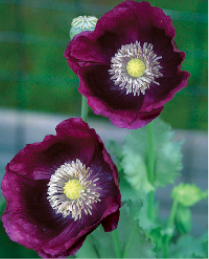 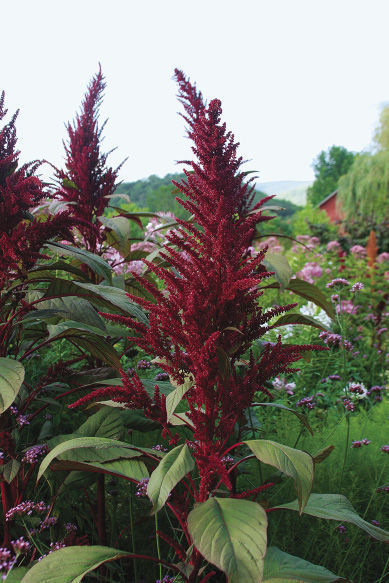 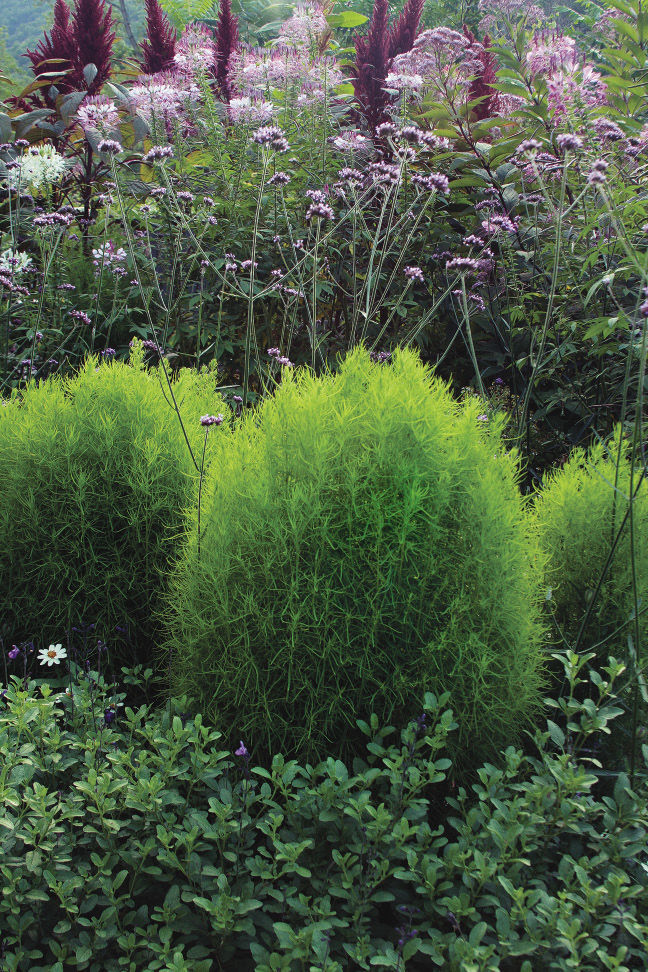 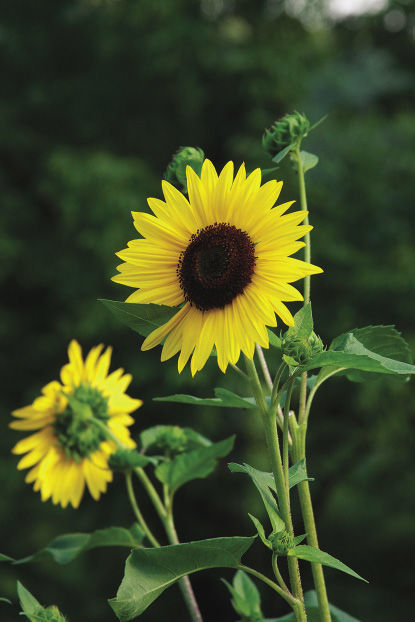 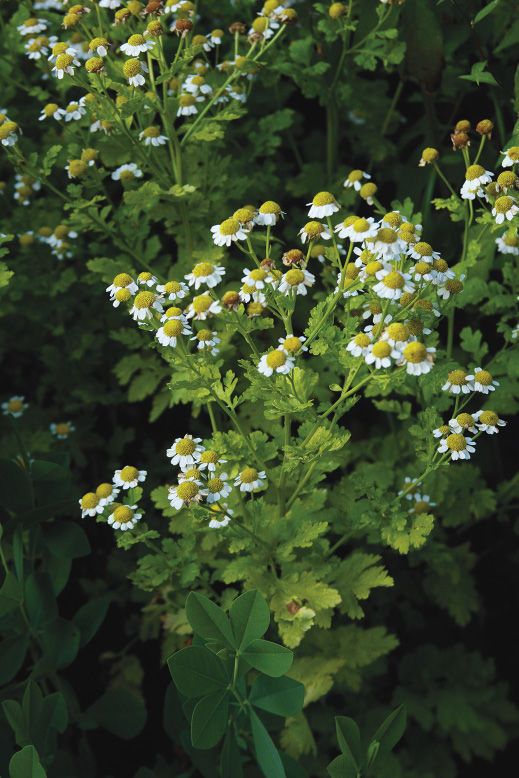 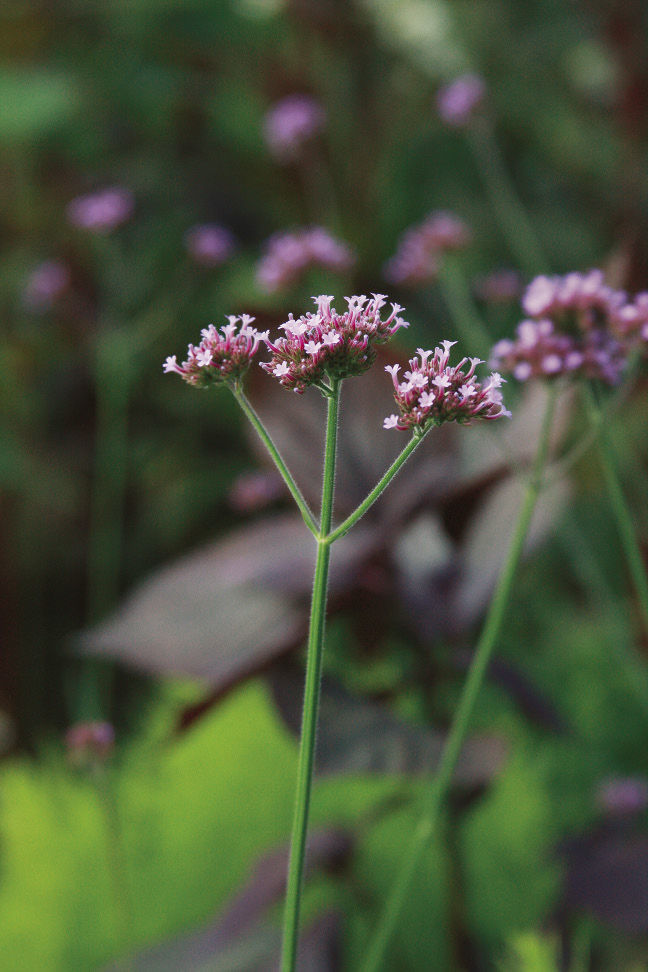 All of the self-sowers in this garden disperse their seeds when they begin to ripen in late summer. Most are well behaved, but some seed heavily, creating a dense, nearly impenetrable mass of seedlings the following spring. I control this somewhat by completely deadheading these plants, saving the seeds, and spreading them around where I choose. The plants I regulate are marked with a star (✦) in this list.

Near the end of June, when only the best plants are left standing, I top the beds with a generous layer of a fine, crumbly mulch of compost and manure. I do no supplemental watering, even in dry weather. By mid-July, the ground is covered and the plants are thriving. The mulch keeps the soil moist, and the plants knit together and shade the ground. I pluck out weeds, which are few and far between. I groom the garden regularly, and there is usually a bit of staking to do in August, when the garden peaks.

In autumn, I cut back on grooming and tending and allow nature to claim the garden as its own. Soon enough, the work of seed collecting begins. I simply cut the seedpods off their dry stalks, toss them in paper bags, and allow them to dry in the shed for several weeks. In November, I cut down and clean up the garden.

After winter has settled in for good, I spread seeds around so that they can lie on the ground and be naturally cold and dormant. Freezing and thawing will help draw them into the soil, and snow and rain will finish the process of planting them. Most winters, the garden lies buried beneath a thick layer of snow until March.

To see more photos of this garden, go to FineGardening.com/extras.

Dean Riddle is a garden designer in the Catskill Mountains of upstate New York.