A Flurry of Snowdrops

For blossoms at winter's end, plant a drift of bulbs this fall

Few flowers are more appreciated than the first blossoms of spring, promising as they do a season of sunshine and renewal after the long, gray winter months. Always among the first to appear are snowdrops, their dainty bells of pale ivory and jade blooming close on the heels of winter aconite and before most crocuses.

Although I have long been charmed by these tiny bulbs, I did not become a collector of snowdrops until after an especially fierce early March ice storm. My garden beds were a sad sight that spring, containing more mud than greenery and bearing huge gouges where fallen branches had been dragged away. The only flowers completely unaffected by the storm were my snowdrops. Impressed by the hardiness of these deceptively delicate bulbs and resolved to always have early spring bloom in my garden, I began collecting as many species and varieties of snowdrops as I could find.

With snowdrops, variety is in the details

Snowdrops look somewhat like the flowers called snow­flakes. The latter belong to the genus Leucojum, whereas snowdrops are members of the genus Galanthus. A derivative of the Greek gala, meaning milk, and anthos, meaning flower, Galanthus aptly describes the milk-white snowdrop.

At a distance, all snowdrops look pretty much alike. What fascinates me are the subtle variations between species within the genus Galanthus and between varieties within some of the species. Close inspection reveals the slightest differences in the size of the flowers, the height of the plants, the width of leaves, and the markings on the flowers.

The most reliable species is the one that bloomed in such a welcome manner in my garden, G. nivalis, the common snowdrop. Although G. nivalis usually flowers in March in my USDA Hardiness Zone 6 (–10°F) garden, two old English nicknames for this species, “Fair Maids of February” and “Candlemas Bells” (Candlemas falls on February 2nd), indicate that blossoming time may be significantly earlier under milder weather conditions.

G. nivalis, like many of its relatives, is exceptionally hardy, flourishing from Zones 3 to 8 (–40°F to 10°F). The narrow, pointed leaves, each with a hard, white tip, readily push through frozen ground and snow, to be followed soon after by the dainty blossoms. Each snowy white bloom bears a cap of bright green and dangles like a single tiny lantern from a strong stem. When closed, a trio of ovoid sepals gives each bloom its characteristic “drop” shape; when open, the inner triad of petals is revealed, each with a notch at the lower edge accented in emerald green. Though small, usually ­ranging from 3 to 4 inches high, G. nivalis is good for ­cutting, and makes an excellent candidate for miniature ­winter nosegays. Its faint, honeylike scent is more noticeable indoors than out. 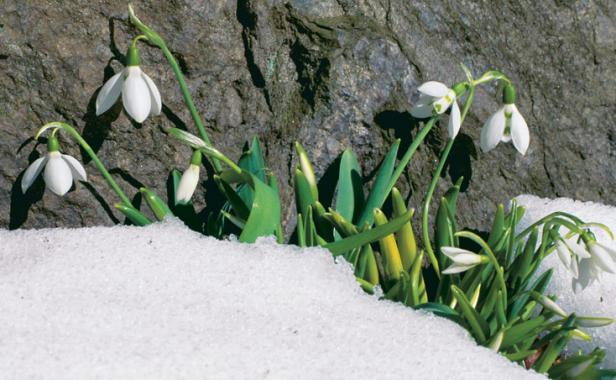 Two of the best species for cutting, because they are among the largest in size, are the so-called giant snowdrop, G. elwesii, and the very similar G. caucasicus. Both plants are about 6 inches high. G. caucasicus is usually the first snowdrop to bloom—mine sometimes open in late ­February. G. elwesii blooms slightly later than G. nivalis. Both giants have somewhat broad leaves, gray-green in color. G. ­elwesii has two green markings on the inner petals. The markings on the petals of G. caucasicus extend to form a stripe. The bulbs of both species are two or three times larger than those of G. nivalis, and benefit from slightly wider spacing and deeper planting.

Among my favorite snowdrops are G. nivalis ‘Flore Pleno’, whose inner petals are doubled, creating a frothy effect like white petticoats laced with green ribbon, and G. viridapicis, whose outer sepals as well as petals are delicately tipped in a verdant hue.

I traded for two other intriguing snowdrops, neither of which, to my knowledge, is available commercially in this country. G. nivalis ‘Lutescens’ adds dashes of gold to the snowdrop color palette. Its petals are still snowy white, but the cap at the top of the blossom and the markings on the petals are citron-yellow. G. reginae-olgae blooms in ­autumn, a rare trait among this tribe of predominantly ­spring-blooming bulbs. 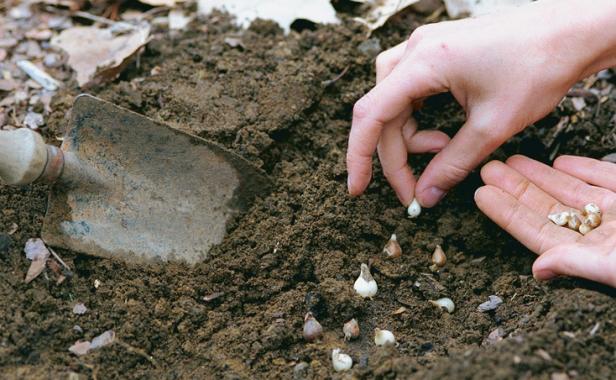 To enjoy the sight of snowdrops pushing up through the ice next spring, you have to plant the bulbs now, in the fall, ­before a hard frost. All snowdrop bulbs are fairly small, those of G. nivalis being about the size of a thumbnail, and should be spaced 2 to 3 inches apart and planted at least 3 to 4 inches deep. Plant ­mail-order bulbs immediately; don’t let them dry out.

Snowdrops are excellent naturalizers and will multiply rapidly where conditions suit them. They ­benefit from moist but not boggy soil and a generous amount of spring sunshine, though they may be planted ­under deciduous trees and shrubs to good effect, since shade in summer will not hurt the bulbs.

An especially helpful feature of snowdrops is that their leaves obligingly and tidily die away by late spring. Snowdrops bloom best in crowded conditions, and rarely need to be divided. Should you want to move some or give some away, however, you can divide the clumps and replant the bulbs after they have bloomed but while the leaves are still green. Be careful not to mow the foliage of bulbs grown in grass.

Small size and hardiness combine to make snowdrops ideal candidates for inclusion in rock gardens, or for troughs and raised beds where the delicate structure of the blossoms may be enjoyed close up. Plant yours in a spot where you pass by frequently or where you have a clear view from a window so that you will be certain not to miss the early-spring display of dainty, nodding blooms, whispering that the end of winter is near.