In the spring of 2014, I was sent Vermillionaire® firecracker plant to trial in the University of Tennessee Gardens. By midsummer it had become not only my favorite but also the favorite of every visitor. It received the highest marks from our staff as well, and to my surprise, it came back from its roots the following spring. Each summer since, this plant has continued to stand out.

Tubular, fiery orange-red blooms with highlights of white and yellow are produced up and down the stems. The slightly glossy, deep green leaves contrast nicely with—and enhance—the flowers. It’s easy to see where the common name “firecracker plant” comes from. While the flowers don’t explode with sound, they do burst with color and sheer volume. No matter how hot or humid it gets, Vermillionaire® blooms nonstop from early summer until frost. Although it will tolerate some shade, six or more hours of full sun is best for unsurpassed flowering and tight growth. It is tolerant of droughty conditions once established, but when provided with supplemental water during dry periods and feeding every three or four weeks, it becomes a flowering machine. It also makes a good cut flower. Like all Cuphea, Vermillionaire® is high in essential oils, which makes it a nutritious nectar plant for bees, butterflies, beneficial wasps, and hummingbirds.

Although it’s sold as a perennial in Zones 8 and warmer, for the most part it has been winter hardy in our Zone 7 garden. Even after winters where we have had brief periods dropping down to 0°F, most of the plants came back. If you’re in an area where it is marginally hardy, it is best not to cut it back until spring. An application of light mulch (such as pine needles) about 6 inches deep helps protect its roots. Even if it is not hardy in your garden, you won’t be disappointed in this plant as a great flowering annual. It looks striking in beds as well as in pots and makes an outstanding addition to any pollinator garden—or any garden, if I’m being completely honest. 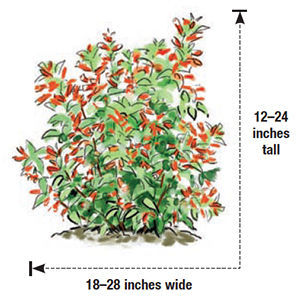 Native range: Warm temperate to tropical regions of the Americas

—Jason Reeves is the curator of the University of Tennessee Gardens, located in Jackson.