A Better Fix for Root-Bound Plants

We’ve all experienced the disappointment of sliding a newly purchased tree or shrub out of its container only to find a tightly woven mosaic of circling roots. For years, experts have told us that the key to planting a root-bound tree or shrub is to slice down the sides of the root ball with a knife at four places around its circumference to a depth of roughly an inch and then slice an X across the bottom. Or perhaps you were told that you should cut the root ball into two halves, or tease out the roots using your fingers. New evidence indicates, however, that none of these techniques is truly effective.

Researchers across the United States have tested several techniques on a variety of trees to see how each approach affects a plant’s ability to grow out of a root-bound situation. This research includes an ongoing study at the University of Minnesota, where I and several of my colleagues took root-bound trees and treated them in one of three ways: For the first group, we left the root balls alone; for the second group, we sliced the root balls down the sides and across the bottom (the technique currently recommended by most universities); and for the third group, we used a pruning saw to cut each root ball into the shape of a box. Known as a “box cut,” this aggressive pruning technique involves cutting off most of the circling roots from the root ball. We then planted the trees and left them in the soil for five years to see how the cuts affected the trees’ growth and health.

Root pruning works only if the planting depth is right

As we dug up our samples, it quickly became obvious that taking trees out of their containers and planting them directly into the ground is a bad idea. When you buy a potted tree, a large portion of the stem is usually buried by the medium in that container. If you always plant your trees and shrubs in the ground at the same depth that they were planted in their containers, you run the risk of planting them too deep. When soil is too high around a tree or shrub’s main stem, the top roots have the potential to surround the stem and compress the stem as the plant grows, eventually killing the plant. When planted too deep, all of the trees from our three sample groups had at least some roots that crossed the stem.

When planted at the correct depth, however, chances for success increased. We are convinced that the single most important thing you can do when planting any container-grown tree or shrub—not just a root-bound one—is to dig away the top of the medium from the container until you reach the first large root (one that is about a quarter of an inch thick) and plant the tree or shrub so that this root is even with or just above soil level. That way, even if roots are circling, they will not compress the stem as the plant grows.

Slice it, make a box cut, or just leave it alone?

In a perfect world, the nursery industry would prevent root-bound plants altogether. Technology already exists that can drastically limit the amount of circling roots in a container. Several companies are producing container products, such as RootMaker, Smart Pots, and Superoots, that stop roots from circling. But until consumers demand that nurseries use these technologies, we are left to deal with circling roots as best we can.

Our study confirmed that roots that begin circling while in a nursery pot won’t ever straighten out, but they also won’t continue to grow in a circular direction once the tree is removed from the container and planted. In our study, we found that using the slicing technique does little to get rid of roots that are already circling. Making a box cut, however, does lead to a root system where fewer roots are circling; other researchers have had similar findings. Without question, plants that we box-cut had the most attractive root systems in terms of the roots spreading out from the root ball, although some of these trees did have undersize leaves their first year in the ground.

At this point, we see no reason to continue to recommend the slicing technique because it hasn’t been proven to correct circling roots. For trees with no circling roots thicker than a pencil, simply remove any soil covering the uppermost roots and gently loosen the container medium around the root ball with your fingers so that it will mix more freely with the soil in the planting hole. For plants with at least one circling root measuring a pencil’s diameter or greater, a box cut may be useful for reducing circling roots and the problems that they cause. 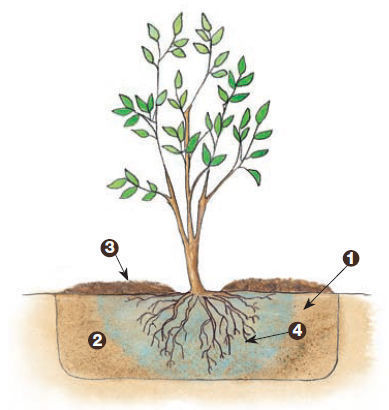 Planting at the right depth and pruning off circling roots, although important, are just the first steps to help ensure that your new plant gets off to a good start. For the best results, keep these practices in mind, too:

1. Dig a hole two to three times the diameter of the root ball that you’re planting. This loosens the soil and makes it easier for roots to spread out as they grow. After filling the hole, the uppermost root should be barely visible.

2. Never amend the soil going back into the hole. Fertilizers and other amendments, including compost, can harm new roots.

3. Use organic mulch, such as wood chips or pine bark, which will break down and gradually add nutrients to the soil. Spread a 3- to 6-inch-deep layer of mulch in a 3- to 6-foot-wide donut shape around the tree, but keep the mulch about 4 inches from the trunk. If mulch is pushed up against a tree’s trunk, the top roots may grow up into the mulch layer and encircle the trunk.

4. Water the entire root zone. Because roots won’t grow into dry soil, it’s important to deeply water the soil around the hole to encourage roots to expand outward. To avoid drowning your new plant, water only once a week.

—Jeff Gillman, author of The Truth About Organic Gardening, is an associate professor of horticulture at the University of Minnesota in St. Paul.