For a border that pleases all summer long, rely on a mix of colorful perennials and shrubs that can practically take care of themselves

When my husband and I moved into our house, our first priority was to put in a pool. With demanding careers that left us precious little time for ourselves, we envisioned a private outdoor oasis where we could relax together at the end of the week. So we made an enclosed backyard space, comprised of the pool, a surrounding patio, and generous garden beds filled with perennials and flowering shrubs. Before we had children, it was our quiet sanctuary, and now it’s become a gathering center for our growing family. Whatever the function of a patio used mostly in summer, it’s not the place for fussy plantings, which is something I learned the hard way. Once I realized that, I gradually created a garden that enhances our hot-weather leisure activities and requires only minimal maintenance.

Give a summer patio an appealing view

While our pool was being installed, I turned my attention to the landscape. I pictured a long perennial border running along one side of the pool, which would camouflage an obtrusive fence and offer a delightful view that we could enjoy as we swam or relaxed on the patio. Brimming with optimism but with nary a clue about the growth habits and bloom times of the flowers I envisioned for our garden, we dug a bed 8 feet wide and roughly 60 feet long. Then I began the highly enjoyable process of selecting plants for my new perennial garden. It didn’t take long, however, before I realized that it takes more than enthusiasm to create a garden that pleases all summer long.

Oh sure, my garden was absolutely delightful the following spring, stuffed as it was with early-blooming perennials such as peonies (Paeonia spp. and cvs.), lady’s mantle (Alchemilla mollis), pinks (Dianthus spp. and cvs.), and Siberian irises (Iris sibirica and cvs.). Admiring my garden that spring for the umpteenth time, I congratulated myself on what a masterful gardener I had become.

As spring faded into summer, however, and my beautiful garden likewise faded into a distant memory, it dawned on me that there weren’t enough remaining perennials to offer interest during the rest of the growing season. Particularly distressing was the fact that in early spring, when my garden was at its peak, it was usually too chilly to spend much time in the pool or on the patio.

Dismayed at the thought of spending the entire summer staring at a garden past its prime, I began to prowl nurseries looking for intriguing plants that were in bloom when I needed them most: in July and August. So I gradually reworked the border to make it more of a summer garden. To be fair, the garden does look showy in spring, but now it’s also colorful during the dog days of summer.

Anchoring this garden are large boxwoods and summer-blooming shrubs such as Hydrangea macrophylla ‘Nikko Blue’, rose of Sharon (Hibiscus syriacus and cvs.), and Rosa ‘Bonica’. Around these shrubs I’ve planted many summer-blooming flowers, including hollyhocks (Alcea rosea cvs.)—which give the garden instant charm as well as height—and Oriental lilies (Lilium cvs.), which take up little room while offering extravagant blooms and intoxicating fragrance. Other strong summer performers are Shasta daisies (Leucanthemum × superbum cvs.), purple coneflowers (Echinacea purpurea ‘Magnus’), and low-growing asters (Aster spp. and cvs.). Also, by religiously deadheading the spent flower heads of certain perennials, such as foxgloves (Digitalis purpurea and cvs.) and ‘May Night’ sage (Salvia × sylvestris ‘May Night’), I can extend their bloom time through August.

One of the most enjoyable pursuits my summer garden has afforded me is the chance to tinker with different plants. I’ve found that flowers with soft pastel shades get completely washed out under the harsh glare of the summer sun. Now, I save most soft-colored flowers for the spring garden, when the sun is lower in the sky and less intense. I rely, instead, on the yolk-colored flowers of black-eyed Susan (Rudbeckia fulgida var. sullivantii ‘Goldsturm’), the vivid pink blooms of garden phlox (Phlox paniculata ‘Eva Cullum’), and the sulfur yellow blooms of yarrow (Achillea ‘Moonshine’). Two other favorites that can withstand the sun’s intensity are ‘Firewitch’ pink (Dianthus gratianopolitanus ‘Firewitch’), which forms a low-growing mat of silvery blue foliage topped by bright magenta flowers, and the easy-care shrub rose called ‘Knockout,’ which lives up to its name.

I’ve also learned that it’s essential to fill a summer garden with low-maintenance plants that have long bloom times and attractive habits (see the chart above). Chief among these are ‘Moonbeam’ coreopsis (Coreopsis ‘Moonbeam’), several ornamental grasses, black-eyed Susans, late-blooming astilbes, low-growing asters, the ever-reliable Sedum ‘Autumn Joy’, and Sedum spectabile ‘Brilliant’, which is more compact than ‘Autumn Joy’ and has bright lavender-pink blooms. All these perennials look attractive from the moment they emerge in spring until the first frost in October. Best of all, they require almost no maintenance.

One benefit of moving plants around so much in the early years of my garden was that it gave me a chance to experiment with different combinations. After much trial and error, I discovered that plants with contrasting shapes, textures, and colors made good partners. For example, when I moved some black-eyed Susans next to a large clipped boxwood, their bright blooms seemed to leap out of the garden. I realized that the sharp contrast between the bold flowers and the boxwood’s deep green foliage and formal, mounded shape made them good partners. Inspired by this discovery, I began to pair other contrasting plants. I found that peonies—with their dark green, glossy leaves and tidy, rounded habit—make a wonderful foil for the feathery foliage of yarrow and the sprawling habit of catmint. Peonies also work well next to the swordlike foliage of bearded irises and the tall, slender flower stalks of foxgloves and lilies. Similarly, I planted Sedum spectabile ‘Brilliant’, which resembles a light green ball for most of the summer, next to the spiky blooms of ‘May Night’ sage. Behind the sedum I planted a clump of vase-shaped Shasta daisies. In addition to the contrasting shapes of these three perennials, I like the graceful succession of flowering times they offer beginning in early spring when the ‘May Night’ sage begins to bloom. In July, the daisies get to strut their stuff. When the daisies begin to fade in August, the broccoli-like flower heads of ‘Brilliant’ take center stage, changing from green to lavender-pink and drawing attention away from the deadheaded daisies.

Relying on long-blooming workhorses lets me trade my garden gloves for a cool drink while I sit back and enjoy the beautiful view. That’s my kind of garden. 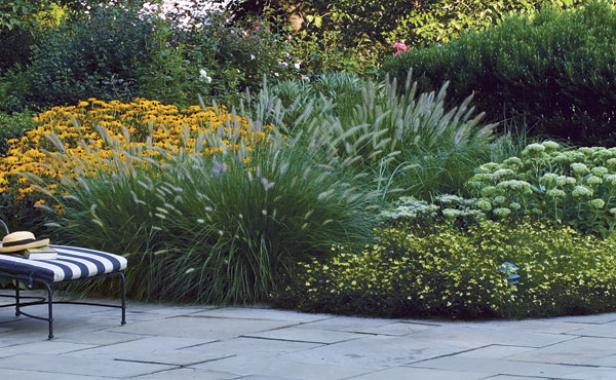 My poolside garden includes a simple summer planting in which four different perennials are massed together within a small rectangular bed. The plants (keyed to the numbers in the photo below) are:

The overlapping bloom times, complementary plant forms, and tidy growth habits of these four plants all work to ensure that this garden looks appealing from the moment it starts to bloom in mid-June until well into fall. Best of all, it requires no maintenance once the plants’ dead foliage has been cut to the ground in early spring.