Trimming a Rose During the Growing Season

I was up at the Biltmore Estate for the first round of judging for its International Rose Trials recently. There was one lovely yellow rose that was sending up some particularly tall canes—taller than a rose in that spot should be growing. What was very interesting was that it was blooming down low and at the top of those tall canes. At the time they were planted they were newly released roses, so not much was known about them.

The question came up what to do about it. 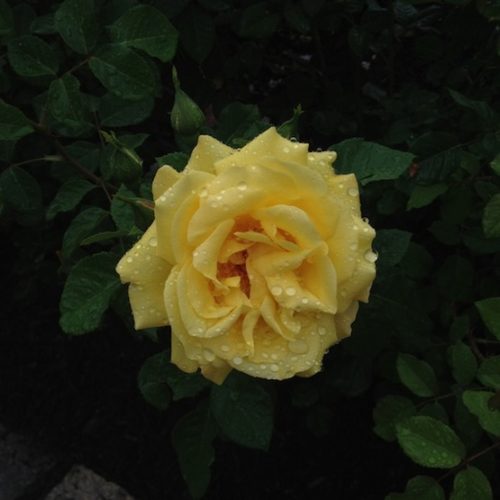 Now if this was any other plant that would be an odd question—odd, only because the answer would be obvious: Cut it back.

Yet since these are roses, the idea of cutting them back in midseason causes experienced gardeners to pause and say to themselves, “Can I do that?”

You can do some selective rose pruning throughout the year

I suspect this is due to the cutting back of roses discussed only in the context of “pruning season.” Pruning season for most of the country is late winter or early spring when the forsythia bloom. That has always been the accepted time to do the hard cutting back of your roses—and it still is for the major work.

With garden roses, we are learning it is OK to cut them back during the growing season to keep them to a manageable and desired size.

Before we go on I need to interject that ideally you want to make sure you select a rose with the right mature height for that particular spot and use in the garden. Just as with selecting any plant, shrub, or tree, it’s important to consider the growth habit and size before you buy.

Yet even the most knowledgeable of gardeners sometimes find themselves faced with a plant that exceeds size expectations. When this happens they simply realize that the plant is going to need regular trimming to keep it in check.

That is exactly how I want you to think of garden roses. It you have an exuberant rose there is nothing wrong with trimming it during the growing season to keep it under control. The best time to do this is right after each bloom flush. What is a bloom flush? A bloom flush is defined as each time the rose cycles through a major flowering. All roses have times when they are covered in flowers and times when they are not. When they are covered in flowers they are at the peak of their bloom flush, and when they are not they are between bloom flushes. It’s the time between flushes you will do your cut back. Why? Because you don’t want to do it while the rose is in peak bloom and cut off all those glorious flowers!

I’m not a big believer in a radical cutback during the growing season. Instead, try to cut back only individual canes that are growing taller than you would like. In the case of the yellow rose at Biltmore, the method would be to simply cut the tall canes back to the height of the bulk of the bush right after they bloom. If the entire plant is out of control, bring it back by no more than a third to a half. If the plant simply doesn’t want to stay contained, then come winter simply move it to a spot where it can grow to its natural size.

So if your roses get out of bounds during the growing season, do what your gardener’s instincts are telling you to do. Trim them!

This site is protected by reCAPTCHA and the Google Privacy Policy and Terms of Service apply.
See all newsletters
Previous: When to Prune a Young Rose
X
View Comments