How to Prune Lilacs

Whether it’s an ancient shrub or a vigorous young plant, every lilac can benefit from some well-placed cuts

One of the few plants that survived my garden renovation was an old, overgrown lilac. I saved it because it blocked the view of my neighbor’s garage and, more important, it had steel-blue double blossoms. These flowers were as beautiful as they were fragrant, but they were so few and so high up on the shrub that it was difficult to enjoy them. Since lilacs can handle severe pruning, I knew there was no need to give up on this long-neglected plant, and I went ahead with a rejuvenation pruning.

The common French lilacs (Syringa vulgaris cvs.) produce the most and the largest flowers on stems that are not more than five or six years old. As the stems get older, the flowers become fewer, smaller, and more out of reach. But with proper pruning, a lilac can produce flowers reliably for decades. What technique you use depends on the age of your shrub. An annual maintenance routine keeps plants vigorous. For those lilacs that have seen better days, like mine, a more severe pruning may be in order.

Lilacs should be pruned yearly to develop a good framework of stems and promote vigorous growth that enhances flowering. Yearly pruning consists of cutting diseased, misshapen, and unproductive stems to the ground. I also thin and remove some stems to encourage properly spaced, vigorous growth. In addition, I cut off some of the new shoots that arise from the roots to keep them from straying too far from the center of the plant, allowing a few inches between each stem to avoid overcrowding. I keep the shoots that are pencil-thick all the way to the end of the branches because they are the most productive. Small, twiggy growth is not productive and will not produce flowers. This growth may be a sign of too much shade or of too many old, nonproductive stems. Removing stems may be done immediately after flowering, or, if you don’t mind sacrificing a few blossoms, in late winter. Shoots and stems should be cut off at or just below soil level.

‘Palibin’ Meyer lilac (Syringa meyeri ‘Palibin’) and ‘Miss Kim’ Manchurian lilac (Syringa pubescens ssp. patula ‘Miss Kim’) are both relatively small lilacs with a twiggy habit. Little pruning other than deadheading is required on these types. As the plants age, you can remove a few of the oldest stems to make room for younger, more vigorous stems. Unlike the common lilac, these plants will seldom get out of control. If you do just a small amount of pruning every few years, they may never need to be completely rejuvenated.

Deadheading, also part of annual maintenance, should be done as soon as possible after the flowers fade. The old flower cluster should be cut off at its base—just above the two new shoots that angle out from the stem that ended with the old flower. The new shoots will grow over the summer, set flower buds, and be topped off with a flower cluster the following spring. While not as important as the yearly thinning, removing the old blossoms allows more of the plant’s energy to be directed into growing vigorous shoots and flower buds. I do both my deadheading and yearly thinning in June.

While doing this yearly maintenance, I sometimes come across a candidate for tipping off: a young, vigorous shoot that might be getting too tall but is still a good, productive stem. Rather than cutting the spent flower just at its base, I cut the entire top of the stem back to a single side shoot or to a pair of side shoots at the height I want it. This cut not only helps to reduce the size of the bush but also encourages the side shoots that are now at the top to grow vigorously and produce flower buds for the following year.

Old, overgrown lilacs, like mine, require more drastic pruning. In early spring before growth began, I headed out to take a good look at the bush. Before I started cutting, I checked to see if the plant had been grafted. Since it hadn’t, I cut it right down to the ground (for a grafted plant, see the panel below). I understood that because lilacs flower on the previous season’s growth, this severe pruning would cause the plant to lose some of its looks for a few years. But I also knew the payoff—more blooms and a healthier plant—would be worth it.

When a rejuvenation pruning is done, it is important to fertilize the plant with compost, composted manure, or a balanced chemical fertilizer and to ensure that the soil pH is close to neutral, which lilacs prefer. These amendments and some good mulch will help to stimulate vigorous new growth and better flowering in years to come.

Has your lilac been grafted? 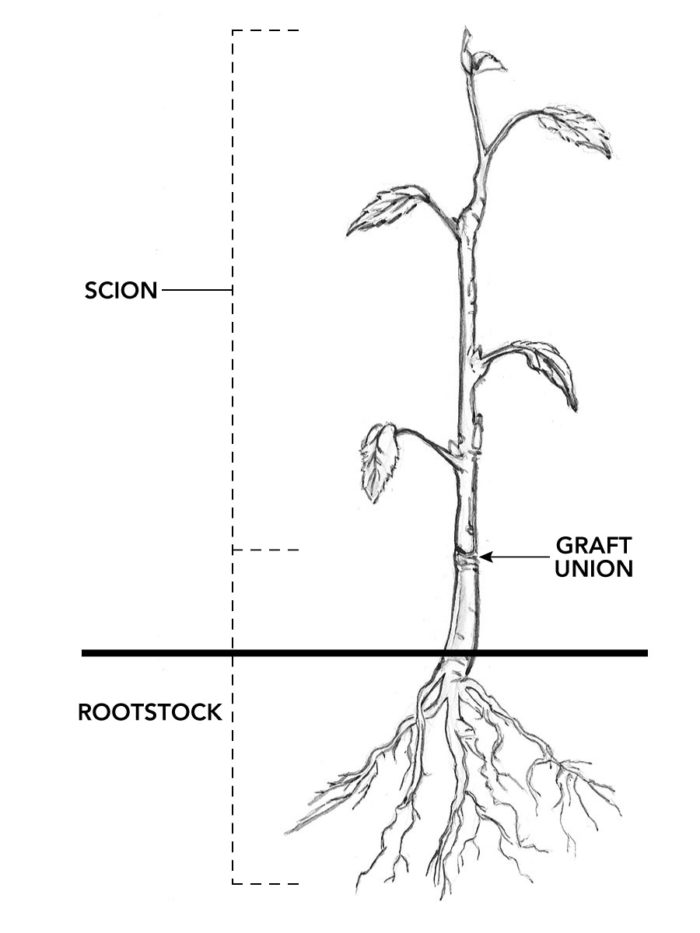 Before you begin making cuts to the stems, inspect your lilac to see if it has been grafted. Grafting is a method of propagation in which a branch of one species—the scion—is attached to the rootstock of another species, usually to improve a plant’s appearance or characteristics. It should be easy to see a graft union, where the scion wood of the cultivar joins the rootstock several inches above ground level. Look for some slight swelling at the graft union and a noticeable difference in the bark from the rootstock to the scion. If your plant has been grafted, you must make your cuts above the graft union, and shoots from the rootstock should not be allowed to grow into new flowering stems. Shoots that grow from the rootstock will not produce flowers in the desired form or color.