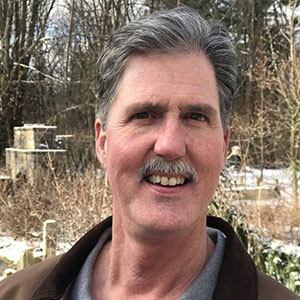 Like many people his age who grew up in the suburbs of the Midwest, Jim was expected to spend most of his leisure time outdoors. With fewer of the distractions available to younger generations, the landscapes in and around the subdivision in which he lived exposed him to the world of plants. As a youngster, he learned a few of the basics of container gardening, and periodic visits to grandparents’ and great-grandparents’ homes piqued an interest in landscaping. With a bachelor’s degree in finance, he became a homeowner with a garden and slowly but surely developed a real passion for plants. He obtained Master Gardener status, which led to jobs on a landscape crew and in a garden center. Fortunately, he landed an assistant gardener position at a public garden, where he was inspired to take his education to another level. Ultimately, he graduated from the School of Professional Horticulture at the New York Botanical Garden; while studying there, he earned a certificate in landscape design. After being employed for many years at the Indianapolis Museum of Art (now called Newfields), he left his position as a horticulturist there only to return the following week as a volunteer. Now he also offers his time and skills to other local public spaces.

1. What do you like most about gardening in your region?

The Midwest is home to species also native to the Eastern forests, the Western prairies, the Southern woodlands, and the Northern savannas.

2. What’s the biggest challenge to gardening in your region?

Climate and weather are the biggest challenges. Hardiness of some of the wonderful ornamentals available to gardeners in warmer areas precludes growing them in most of the region, although warming trends are changing that somewhat. We also seem to be experiencing more extreme weather, concentrated periods of alternating wet-and-dry and hot-and-cold patterns, and no seeming happy medium.

3. What plant are you jazzed about in your garden right now?

I’m jazzed about ‘Ozawa’ Japanese onion (Allium thunbergii ‘Ozawa’, Zones 4–8). It’s been at the top of my list for a few years, and when it comes into full bloom in October, it’s such a beautiful event at the end of the growing season.

4. What was the last plant you killed?

I killed an orchid—a Lycaste balliae hybrid. (Sorry, Ian!) It was the only one I currently had. I’ll leave their cultivation to more skilled and devoted people and enjoy them from a safe distance.