You’re Going to Love Your Shade

Most of us aren’t fortunate enough to have a full day’s worth of sun in our gardens, yet even the most experienced among us is still a little intimidated by shady areas. They’re often uncharted territory—the last place you want to plant because you’re not even sure what will grow there. But whether you have a shady entryway or a tree-shaded yard, there are plenty of options that can bring light and life to your dark space. Simply remember that a successful shade garden starts with good plant choices and adherence to the principles and elements of design.

When you begin exploring your plant options, you’ll discover a plethora of textures and forms. You’ll also find plenty of color—most notably, shades of green and light-simulating chartreuse and silver. The first step is to pair these plants, focusing on establishing contrast among textures, shapes, sizes, and colors to help you play up the qualities of each plant. Next, become aware of how the plant combinations work in relation to the scale of their environment, how they create focal interest, and how they draw the eye from one successful combination to the next. You’re striving to create individual combinations that add interest and fend off the monotony of hosta, hosta, hosta. But you’re also trying to create combos that contribute and connect to the overall landscape.

Here are examples of how picking the right plants and sticking to these basic elements of design can create a pleasing ensemble of plants that make the shade come alive. 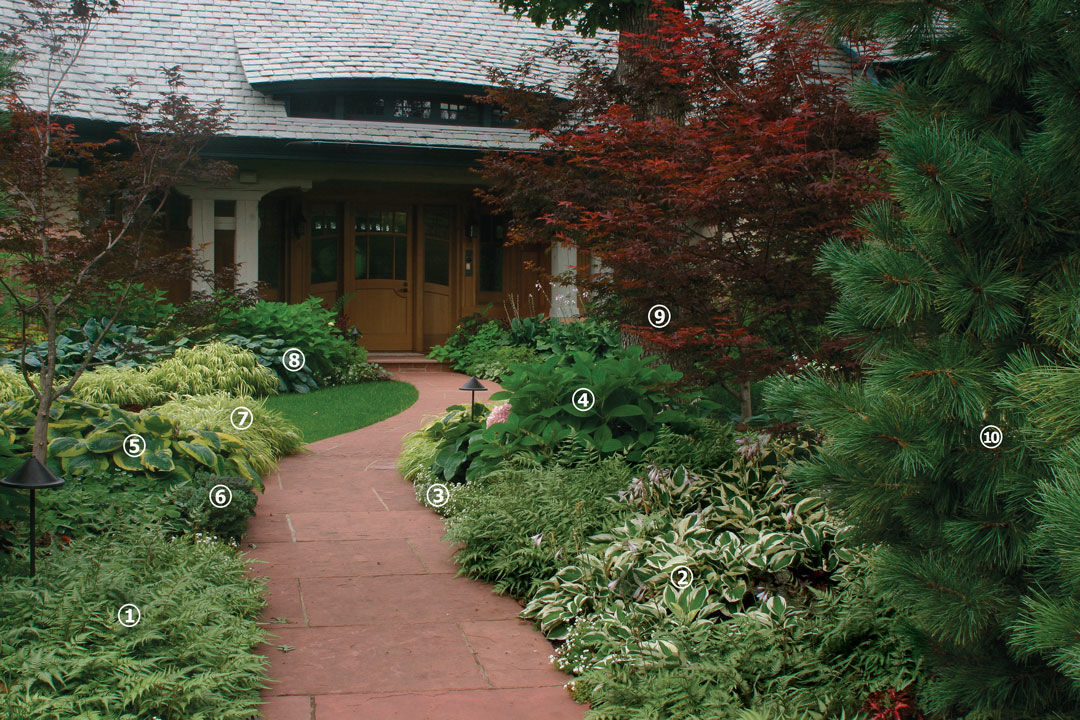 In this entry garden leading to the front door, the central stone path divides the garden in half, yet each side remains connected through repetition of the same or similar plants. For example, Japanese painted fern, ‘Aureola’ Japanese forest grass, ‘Nikko Blue’ hydrangea, Emperor I® Japanese maple, and ‘Blue Angel’ hosta are all duplicated on the opposite side of the path. The Japanese maples are essential for adding a little color and offering some transitional height between the canopy of mature oaks and the lower herbaceous perennials and small shrubs. The sun-loving pine in the foreground takes advantage of one of the few pockets of full sun and is right at home alongside its shady neighbors. 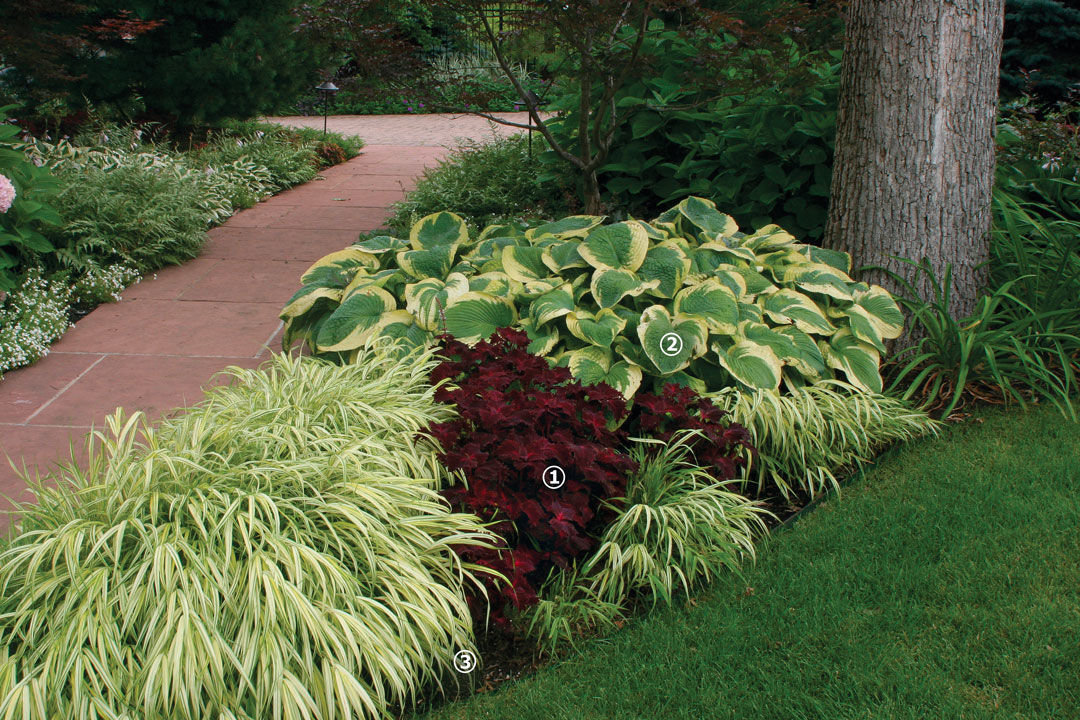 What’s the first thing that comes to mind when you think of a shade garden? Probably not color. When color is used, however, a little bit can make an impact. In this combination, ‘Red Ruffles’ coleus adds a splash of rich color that ties the combo to the warm, reddish tones of the stone path and a burgundy Japanese maple in the background. The large variegated leaves of ‘Frances Williams’ hosta create a focal point and complement the deep color of the coleus and the fine-textured foliage of ‘Aureola’ Japanese forest grass. Although hostas like this are often seen going solo in a shade garden, they look best when paired with other plants.

Even in Shade, Scale is Important 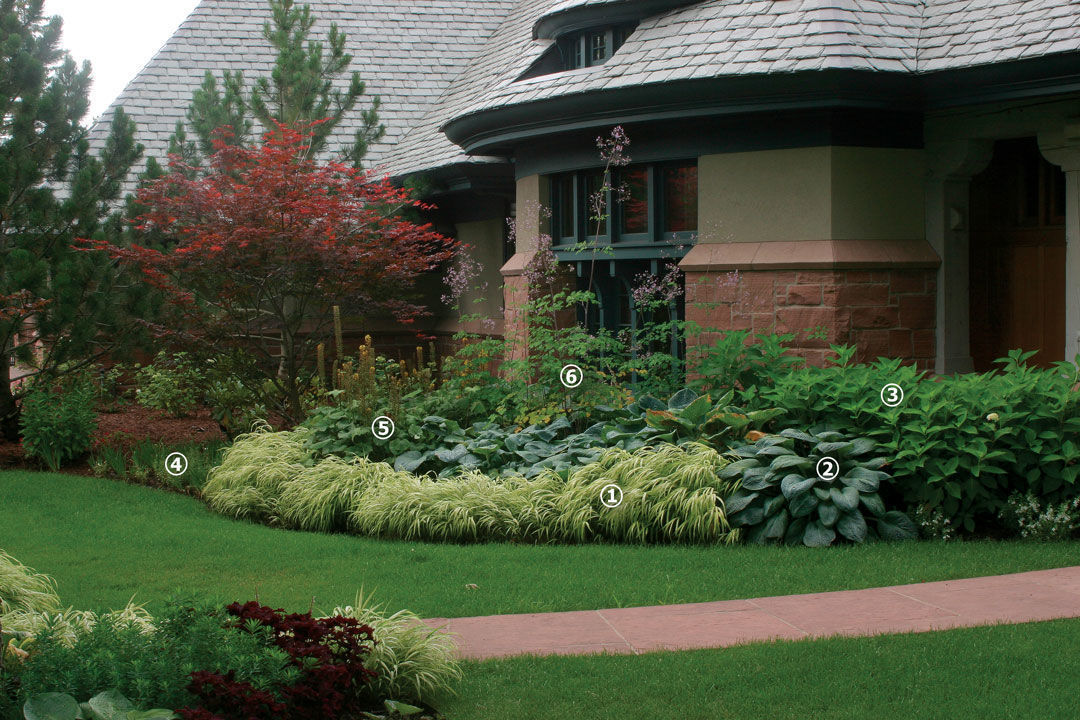 Large groups of herbaceous perennials provide impact and appropriate scale near the foundation of this home. Layering bands of contrasting textures, shapes, heights, and colors add depth, interest, and drama. The bright chartreuse foliage of the fine-textured Japanese forest grass highlights the edge of the bed while drawing the viewer’s eye to other foundation plants. The group of tall ‘Lavender Mist’ meadow rues offers height and transparency without compromising the view from the window behind them. Several pines to the left of this combo offer year-round stability as the flowers of hydrangea, ligularia, and meadow rue come and go throughout the seasons.

Go Short in the Middle 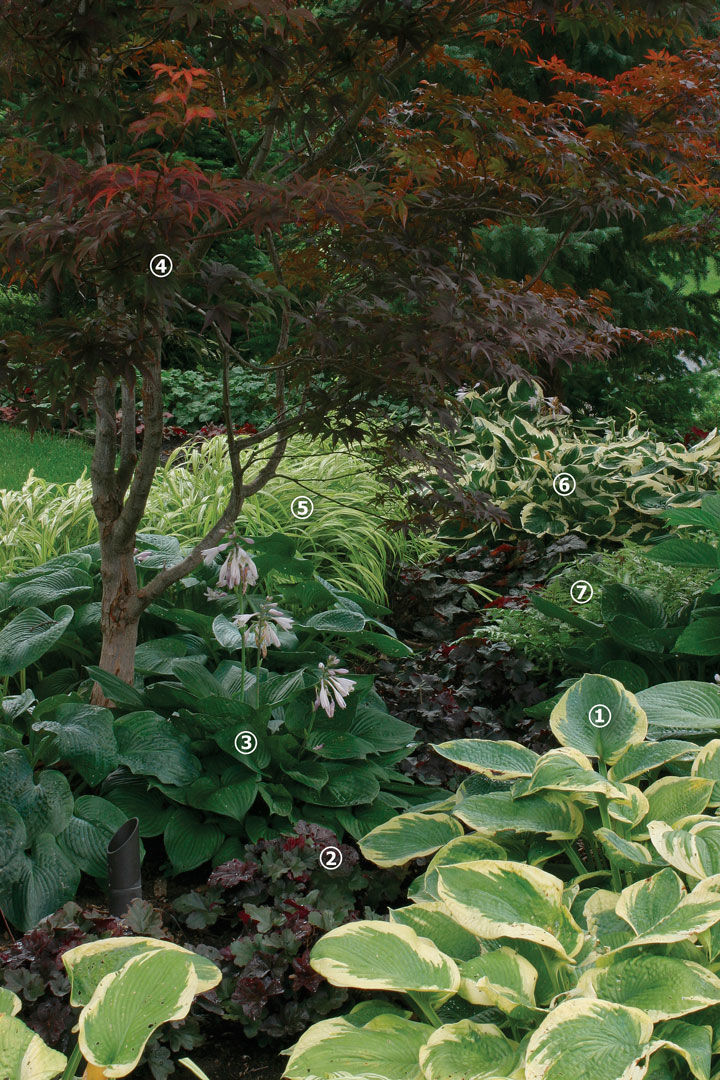 Sometimes it’s all right to break the rules: Short plants don’t have to be used only at the garden’s edge. This river of heuchera flows between taller plants, directing the eye to various points of interest in this deep border. The color of the heuchera relates to the Japanese maple’s canopy of foliage but, more important, creates depth and separation among the other plants. Just the right amount of variegated and chartreuse foliage adds further interest to this otherwise dark grouping. Three hosta varieties are separated by contrasting plant textures and leaf colors, making each one special while also complementing their bedmates. 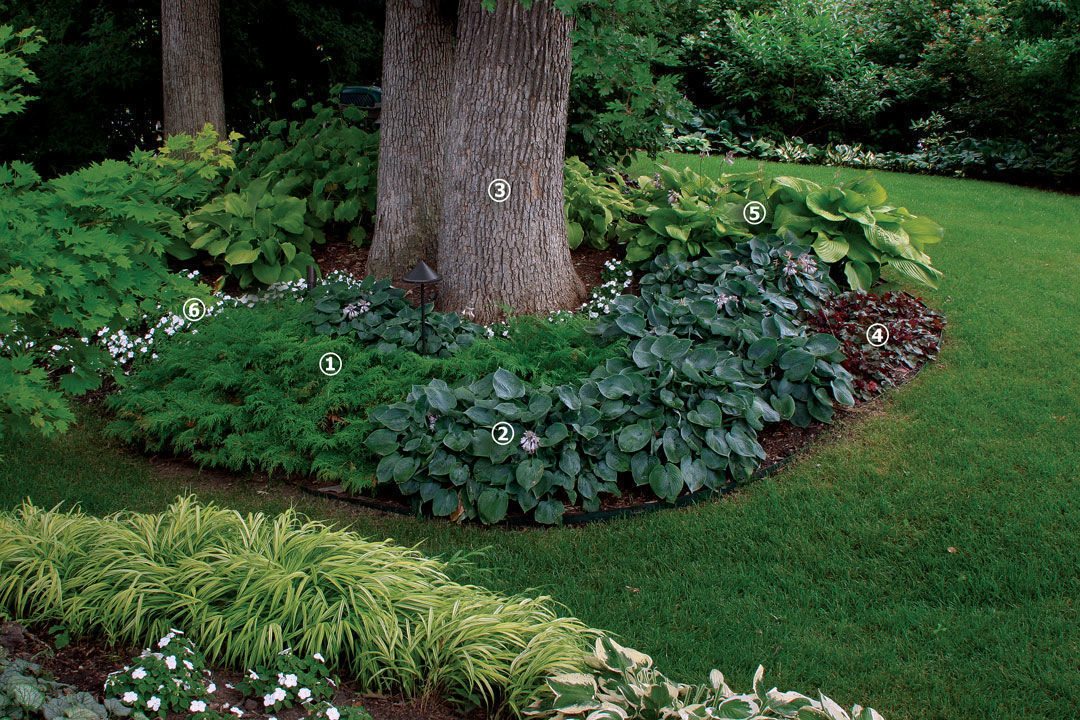 Large masses of perennials are necessary in this part of the shade garden to compete with the massive oaks that dominate the scene. Big trees, however, are the bullies of the shade-garden playground. They are the first in line to take the majority of water and nutrients, leaving little for the plants beneath them. Curb the effects of these bullies’ bad habits by taking extra care to provide adequate water, fertility, and organic matter to your shade plants. With a little special attention, this part of the garden holds up and blends right in with the rest of the landscape. Drifts of white impatiens add a helping hand with a dash of flower power that connects the garden areas on either side of the grass path.

Use Annuals to Fill in the Gaps 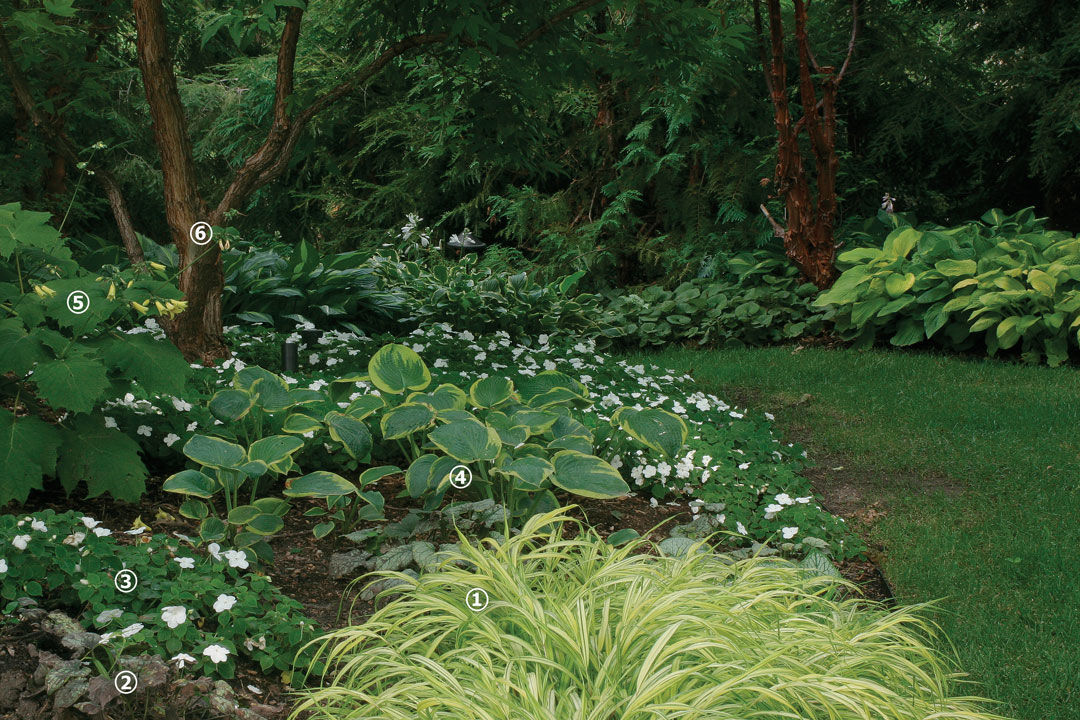 —Scott Endres is co-owner of Tangletown Gardens in Minneapolis, Minnesota.

Is there a better time of year than seed-ordering season? You may shop for seeds online, or perhaps you prefer the analog version (like us) of paper catalogs. Regardless, ordering…

GPOD on the Road: The Isabella Stewart Gardner Museum

Today Teresa Watkins is taking us to visit a very unusual garden. After Christmas, I was in Massachusetts to interview garden author Jana Milbocker for my radio show Better Lawns…