Transitioning a garden viewed by thousands of visitors to sustainability. 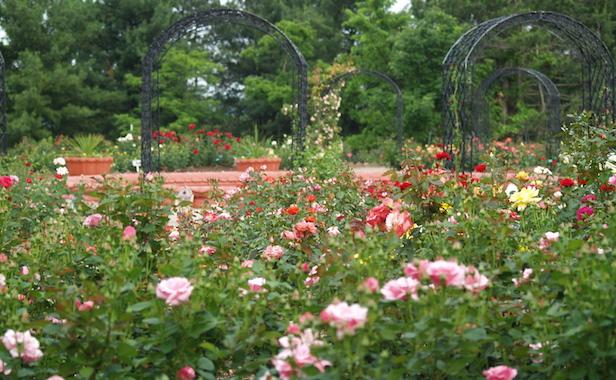 It’s one thing to talk about growing roses sustainably in our own personal gardens. There, we only have our own expectations to meet. Most of us who grow roses without chemicals have learned to live with some damage from insects and the occasional smudge of blackspot. We’ve realized roses were held to a standard higher than other plants and by simply viewing our roses the same way we do all our other plants a little damage is no big deal.

But what if it’s a garden open to the public? A well known garden receiving thousands of visitors each season who, because is what they’ve mistakingly been taught, expect perfection from roses. People who will likely spy blackspot from across the garden despite the sea of blooms and mutter “tsk, tsk, they should really take better care of this garden”.

The answer to can you transition a public garden to sustainability is yes, indeed you can. However, it can’t be done in the way I usually tell folks to do it with their home garden, which is to do it cold turkey.

As I’ve always said during the first year of taking a garden off chemicals it will look worse before it looks better. In our own gardens that’s no big deal because we can explain to visitors what’s going on. Plus, if anyone even utters a “tsk, tsk” we can throw them off the property!

Not so with a public garden. It’s under pressure to look good during the transition, there is no way to fully explain what’s going on and throwing people off the property is not good for building up the visitor count! With all that pressure how do you do it? 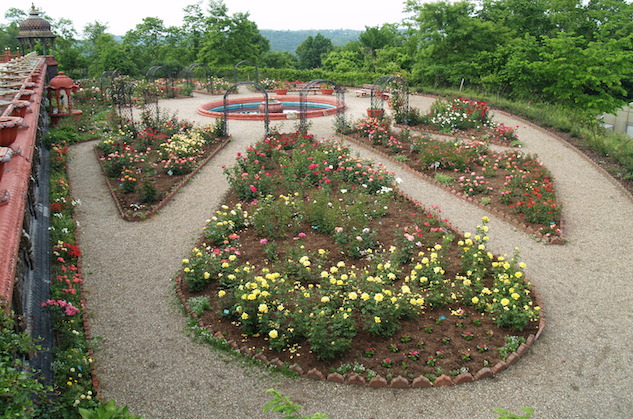 Enter the Palace of Gold Rose Garden located in the New Vrindaban community located in Moundsville, West Virginia. Founded in 1968 by Krishna devotees, the Palace itself was started and built by those same devotees starting in 1972. Remarkably they had little to no training in the skills it takes to build something like this. The results are striking and a testament to perseverance.

The Rose Garden is part of the original design and over the years became an AARS garden. That is All American Rose Selections, which was a testing/marketing program the rose industry used for decades. At present the garden is collection of mostly AARS winners planted in groups of 3 or more.

Over the years the garden was taken care of using traditional chemical rose care methods. Recently, however, those in charge of the garden wish to transition the rose garden to sustainable care – something they feel is more in line with their beliefs. Also, the garden needed a bit of upgrading including adding some new plants, moving around some of what is there and other normal garden chores for a garden every now and then.

Earlier this year they hired me to oversee this work and help the great group of folks who work in the garden daily. It will take several years because it must be done slowly, methodically and with sensitivity towards the gardens purpose, which is to be a beautiful public display garden.

I’ll be blogging about this project from time to time in this space. I hope as you embark on this journey with me and see it can be done, it will give you confidence to do the same in your own garden!

There are many things to consider when selecting a herbaceous perennial plant for the garden. Some slots are for sentimental plantings, like a piece of Grandma’s peony from the family…

On hot summer afternoons, we didn’t need much more than the shade of a mimosa tree and a watermelon to stay cool. My grandfather would split one open, spear the…

GPOD on the Road: Earthwise Garden

Today Cherry Ong is taking us along to a garden she visited this spring. I had a serendipitous discovery when we visited Boundary Bay in Tsawassen, British Columbia, in a…