Rose Rosette Disease: Are The Knock Out Roses® to blame?

Rose Rosette Disease, or RRD, manifests itself on roses in the form of branches that look like “witches broom”. It looks similar to damage caused by accidentally spraying an herbicide like round-up on your roses.

The cause is a microscopic mite that goes by the name of Phyllocoptes Fructiphilus. While wingless, they spread from rose to rose on puffs of wind and transmit RRD to other roses when it feeds on them.

It is increasing in frequency, including in my own garden. I have about four plants that will be dug up because they are infected. We will talk more about how to deal with it later and also why it’s not a reason to stop growing roses. However, in this post I want to address a rumor that says the cause of RRD are The Knock Out Roses®.

Nothing can be further from the truth. 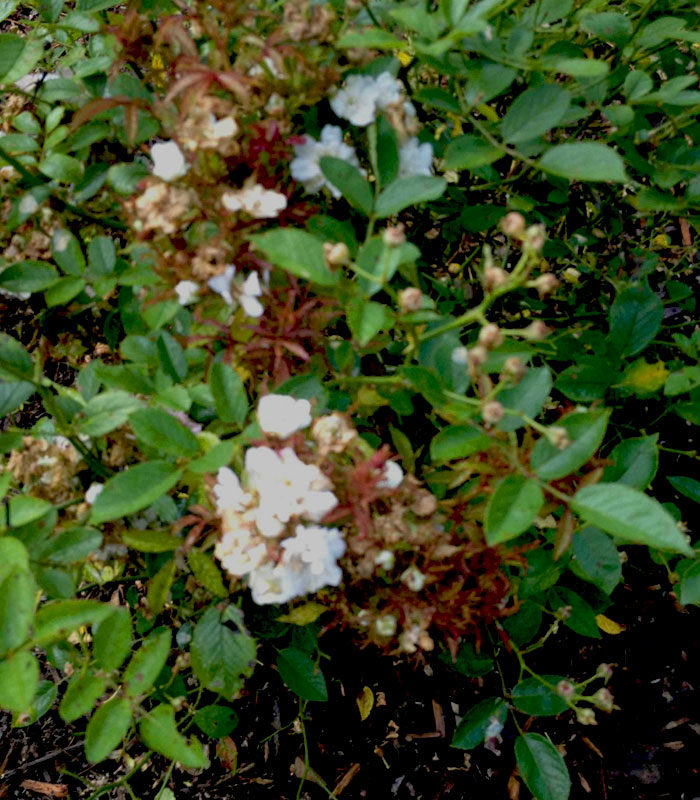 In the 1930s and 1940s R. multiflora became widely established in the central and eastern parts of the United States. Partly with the help of the USDA and partly because it spreads like crazy. Where I live in South Carolina it’s everywhere. It was originally planted for erosion control, hedging and so on.

In the United States the first sightings of RRD were in California back in the 1940s. It showed up in Nebraska in the late 1950s and early 1960s. Another outbreak occurred in Kansas and Missouri and then spread to Oklahoma and Arkansas in the late 1970s and early 1980s. It consistently spread along those plantings of R. multiflora. Since then it has marched steadily on – generally via R. multiflora.

RRD can infect all roses. I see it on a broad range from old to modern. So while RRD can infect The Knock Out Roses®, those roses themselves did not spread it around the country. I suspect the rumor started because since so many Knock Out Roses® have been planted, they are the most widely seen rose and therefore people blame them. I have a Double Knock Out® bush in my garden and I see them all around me.  Most are clean, including mine, and the infections I have seen are no more numerous than infections on other roses. Besides of course R. multiflora which does get it easily.

So if you get or see RRD on a Knock Out Rose® (or any rose) the first thing I suggest you do is starting looking around your area for R. multiflora. Then when you find it destroy it, even if it does not appear to be infected.

But don’t blame your Knock Out Roses®.