Last week I was rummaging through an old box and found a time machine. To anyone else I’m sure it looked like an old, primitively drawn landscape plan. But for me, it was like taking Mr. Peabody’s Wayback Machine to 1975, when my love affair with gardens was sending up its first shoots.

1975 might have been one significant garden milestone in my life, but I realize now that plants have been poking at me since I was just a punk kid. So let’s go back to where it all started as I attempt to connect the dots and share a few lessons along the way…

I was born at a very early age in Brooklyn, NY. We lived in a four-story brick apartment building and I don’t recall there being any trees on our block. I vaguely remember a low hedge behind a dangerously pointy iron fence, but my first truly personal connection with plants was getting a pussy willow bud stuck in my ear, and my mom discovering it weeks later.

Every summer, mom, older brother David, and I escaped to a bungalow colony 100 miles away in the Catskills. The dads would make the three hour drive every Friday after work, and I’d awaken to fresh blueberry pancakes before a weekend of softball games, swimming, and fishing. For those few months, I transformed from city kid to nature boy, joining my brother and his buddies for adventurous expeditions into birch forests and poison ivy.

I’d love to say that my Thoreau-like exposure to untamed nature was the invisible hand that shaped my aesthetic sense and prepared me for a future awash in chlorophyl, but I’d making that part up. Then again, who knows which of life’s experiences might cast their seed and germinate unseen?

What I do remember from my childhood was hearing a group of Puerto Rican musicians jamming on congas, bongos, and cowbells under the boardwalk at Coney Island. The next day I told my folks I needed a pair of bongos. I was five years old and the die was cast, as my world detoured percussively. 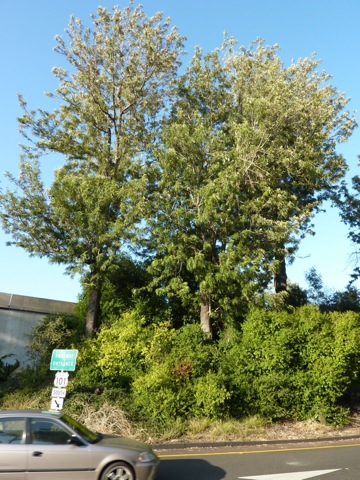 When I was eight, we moved to an apartment in Sherman Oaks, a suburb of LA. Plants appeared prominently on my radar: the fallen leaves of a California pepper tree in the parking lot releasing their pungent aroma as I rode my bike in endless circles; my first gardening paycheck from a neighbor who paid me fifty-cents a week to rake big, crunchy English walnut leaves from her lawn. Did these episodes foreshadow my future selecting trees for parks and gardens? How the heck should I know?

A year later, we bought a house on Lemona Avenue, a few miles away in Van Nuys. It was a corner house dominated by a giant twin-trunk London plane tree and my first encounter with the horticultural equivalent of the Ebola virus: Algerian ivy — Nature’s way of saying “I shall enslave you.” It grew in both of our parkways, and occupied an eight-foot-wide swath around the lawn. We soon discovered that its lushly dark green leaves triggered severe skin allergies for my mom. 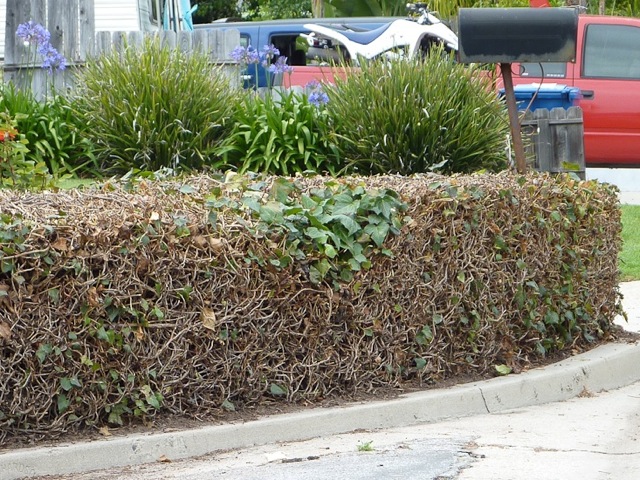 David and I were dispatched to spend our after-dinner summer evenings flailing machetes trying fruitlessly to vanquish the beast. I’m happy to say there were no emergency room visits, though we were occasionally surprised by a warm, old beer shower from hidden brew bombs.

My folks eventually freed us from the Herculean labor, hiring “professionals” to rip the stuff out with a back hoe, then lay waste to the roots with some experimental precursor to Agent Orange.

Lesson #1  Hire henchmen from the start to assure your kids don’t kill each other, and make sure you know what’s in their arsenal.

Our back yard looked like a Hollywood location shot for a Tarzan movie, minus the chimps: giant rice paper plants, banana palms, and enveloping the house, a massive purple bougainvillea with thorns big enough to impale a musk ox.

The back yard had a west-facing exposure with summer temperatures inside the house approaching six bazillion degrees Kelvin ([°F] = [K] × 9⁄5 – 459.67 … you do the math). So my parents, Lovely Linda of Lemona and Irv, undertook their first significant garden design project – shading the house.

At the local nursery, they asked the salesman for a pair of “neat, low maintenance” trees. These plants would be installed in a couple of what I now know to be woefully undersized tree wells in the new concrete patio. All I can say is whoever sold them two silk oaks (Grevillea robusta) should have been planted head first, instead of the trees.

Silk oak (one of the sillier common names, since it neither looks anything like an oak, nor does it produce ladies’ scarves), grows quickly to 60 feet high (I’ve seen some top out at 100), drops massive quantities of brittle leaves, twigs, and spent flowers year round, has massive surface roots capable of buckling the deck of an aircraft carrier, and is notorious for dropping entire branches in high winds.

Lesson #2   Let the buyer beware: I mean no disrespect to the well-trained, earnest folks who work in most nurseries, but please do your own homework and research the plants you intend to bring into your garden. My folks eventually spent thousands of dollar having the trees removed and pavement repaired.

I’m just getting rolling with this landscape plan-induced cruise down memory lane, so I think I’ll take a break and return soon to pick up the story. When you come back, I’ll restart the time machine and connect a few more dots on my long, strange trip.