Some folks are like lizards, preferring to climb atop a rock and sizzle in the sun. I’m a slug. I crave the cool, shady underbelly of a boulder. That’s why this SoCal boy was so looking forward to hydrating his spirit at the Northwest Flower and Garden Show.

I wasn’t disappointed. The forecast called for a cold and drizzly Friday, starting with a salty ferry ride to the Bloedel Reserve on Bainbridge Island.

Kate Gormley, Programs and Communications Director and my contagiously enthusiastic guide, picked me up at the ferry terminal. We spent the morning (umbrellas at the ready, though rarely deployed) exploring some of the 150 acres of majestic conifer groves, hibernating meadows, primeval swathes of moss, and exquisitely rendered Japanese gardens.

There are places within the Reserve where a designer’s intention is evident, 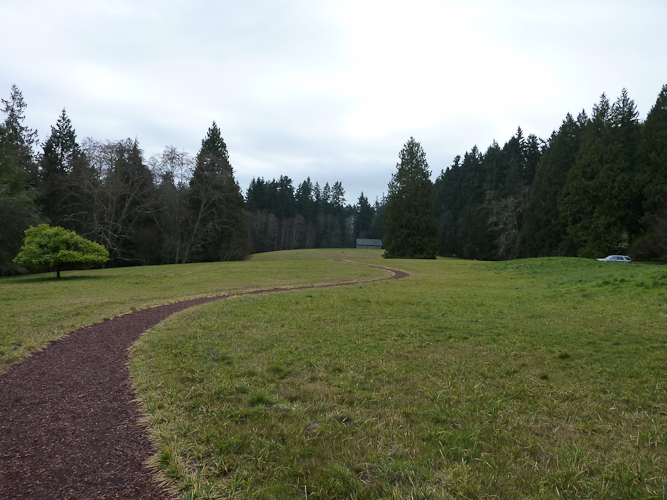 like the Zen garden masterfully designed by Dr. Koichi Kawana, in 1961. But there are those ambiguously magical spaces where it’s hard to tell if you’re looking at the result of natural processes or the subtle brilliance required to sculpt landforms, inject lines of sight, and edit stands of timber with a kind, barely detectable touch.

Kate gave me a quick orientation at the gatehouse and tempting gift shop. The first leg of our walkabout took us to the edge of a broad meadow surrounded by a dense wall of timber.

Winter had flipped the OFF switch for what will soon become a spring tapestry displaying dabbles of wildflowers and tussles of grass. I didn’t miss the color. I was enjoying how the topography and edges of this massive space had been kneaded into a flowing sight line, ending in a slightly off-kilter barn. This space, serving as a grand promenade to the wonders ahead, was an exercise in motion for visitors moving through the landscape, and for the wandering eye.

At the south end of the meadow, horizontal gives way to vertical as towering red cedars, hemlock, and Douglas fir push skyward. My slug instincts were awakened by cool drizzle on my face. The forest understory was dense, lush, and out of control, except along the path edge where it was kept at bay.

The first “take my breath away” moment hit me at the Bird Marsh, originally a circular irrigation pond, later transformed by landscape architect Richard Haag into a tranquil refuge for wildlife. On this day, nothing disturbed the mirrored surface and no birdsongs interrupted the muffled drops of rain on the duff.

It’s a life and death struggle in the forest: A branch dies and an opportunistic moss colony sets up housekeeping. I imagined walking through these woods on a misty, full moon night as a wooly green scorpion claw reaches for my hat.

Kate and I didn’t discuss the equipment budget, but I’m guessing they’re not buying a lot of rakes. Decay and rebirth are continually duking it out in an endless cycle: For every seed that drops and germinates, there are forces bent on decomposing the fallen leaves and twigs, feathers and fur, returning their essence to the soil and closing the circle. 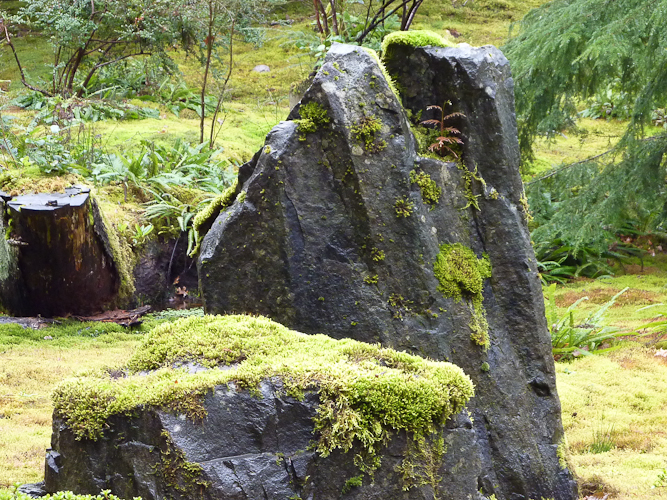 The forest thins and the mulch path peters out at the edge of the Moss Garden. Stone groupings announce the landscape’s change in purpose, transitioning to the guesthouse and Japanese gardens. A fir seed had the good fortune to find a nurturing pocket of soil, symbolically transforming a weathered stone into a towering mountainscape.

My interest in gardens was kindled in my early twenties by a hot and heavy encounter with bonsai, gradually mellowing into a long-term relationship with all things Japanesque. I was thrilled to see the same cultural influences interpreted at the Bloedel Reserve.

Good design is in the edge details. It took a talented designer to conceive the transition from the organic chaos and slow decay of the woodlands to the introduction of order, balance, line, repetition, and pattern of the stone path and torii gate. The close-up reveals a sophisticated marriage of irregular stepping-stones, rectangular slabs, slick pebbles, weathered wood, with the striking contrast of black mondo grass and lime-green moss.

Zoning Out on the Zen

I’m not a good enough writer to explain the profound wave that swept over me as I slowly circled the Zen Garden – resonance is the best I can come up with. This composition just seems right with the universe. With seven weathered stones, gravel, and a rake, Dr. Kawana conjured up a portrayal of islands surrounded by the sea. Zooming in on the shoreline, I could feel the pulse of waves coming ashore. 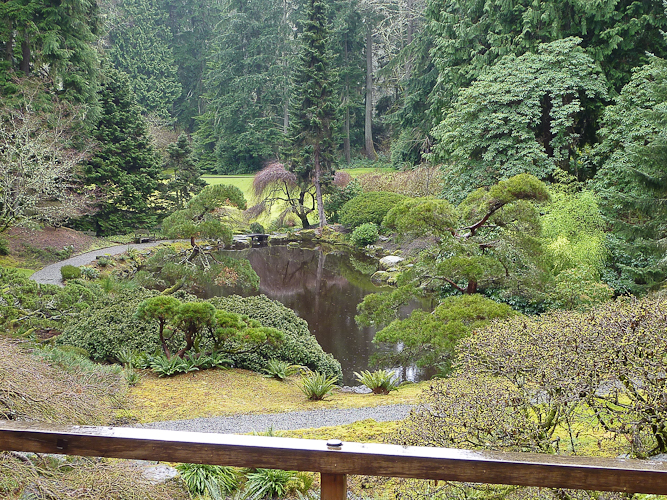 From the east-facing deck of the guest house – a blending of Japanese style and Northwest Native American – a traditional Japanese stroll garden descends to an expanse of meadow. The fiery fall foliage was long gone, making the finely trained pines the center of attention.

Eastward through the woods plucky Kate and I forged, emerging at another clearing. A few ducks were grabbing lunch at the Mid Pond, disturbing the reflection of French chateau-style Visitor Center and formal landscaping. From 1951 until 1986, this was the home of Virginia and Prentice Bloedel, a leader in sustainable forestry practices. Siting the residence at the eastern tip of the estate offers a commanding view from the rear terrace across the Puget Sound to the mainland.

I thanked Kate for her generous welcome and gathered details about an upcoming special event. The Premier Plant Sale will be held on April 14 and 15, featuring plants propagated and grown at Bloedel Reserve, as well as by a dozen of the finest NW growers and nurseries. The festivities will also include lectures by Kelly Dodson of Far Reaches Farm, and Riz Reyes, gardener at the University of Washington Botanic Garden. Bloedel members are invited to a special preview sale on Friday, April 13 from 4-7pm: It’s not too late to become a member.

When I got off the ferry, it was Everybody’s-Getting-Off-Work-Right-Now Friday and Seattle was jumping. After a day of wandering the woods in my meditative state, I consciously resisted the pull of the city’s tempo. Light rain fell but my umbrella stayed in its sheath. I was one ecstatic slug.