Question of the Month: Grafting

Question: It seems like a lot of things are being grafted these days. Why is this, and should I really care? 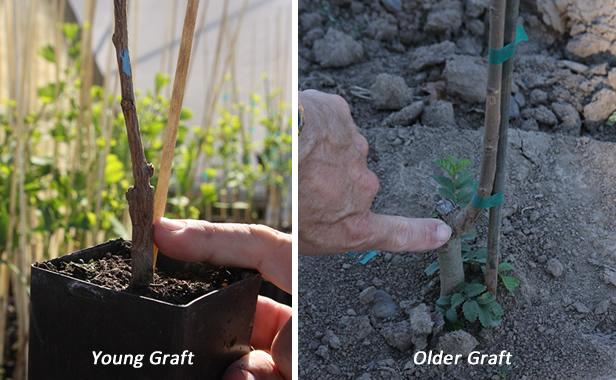 There are several reasons why landscape plants are grafted and several reasons why you should care. Plants can be grafted using several different techniques, but all involve combining the top part (scion) of one plant with the bottom part of another plant (usually called a rootstock or understock). The principle reason for grafting is to maintain uniformity and consistency in specific desired traits. For landscape plants, this usually means ornamental characteristics, such as form (think weeping or columnar trees), flowers, or leaf color. For tree fruits, like apples, scions are selected for their particular fruit variety.

Another reason plants are grafted is because of the desirability of particular rootstocks.  The most common examples of this are dwarfing rootstocks used for many fruit trees and some ornamentals.

So why should you care whether or not plants are grafted? First is the issue of uniformity. If you plant six red maple trees (Acer rubrum, USDA Hardiness Zones 4–9) on both sides of your driveway and you want them to grow at a similar rate and have uniform fall color, then you want to select a named cultivar, virtually all of which are grafted. If you were to plant seedling (nongrafted) red maples, you might end up with six trees that have different growth rates or that vary in intensity and duration of fall color.

Second, there are some negative consequences of grafting that you need to be aware of. During the process of grafting, the vascular tissue of the scion must fuse with that of the understock. Nurseries that specialize in propagation have grafting down to a science and have high success rates. Sometimes, however, delayed graft incompatibility might occur, and the portion of the plant above the graft union might begin to decline or fail. As grafted plants age, you’ll sometimes see increasing differences in growth rate between the top portion of the plant and the understock. This can ultimately lead to a weak point at the graft union, which can result in breakage. Last, knowing whether or not a plant is grafted can be important if something severe—such as winter dieback—should kill the scion but not the rootstock. In this case, the rootstock might send up suckers that are different from the original plant, leading to Extension hotline calls, such as, “Why is my yellow rose bush now producing red roses?!”

Grafting is a common nursery technique used for a variety of horticultural applications. Culinary apples, for example, are typically grafted on rootstocks that confer size control. The vast majority of apple trees are now grown on dwarf or semidwarf rootstocks so that the trees can fit small gardens and restricted spaces. Many landscape plants can, of course, be propagated by seed, but where plants need to be true to the cultivar, some kind of vegetative propagation is normally required. Taking stem cuttings would seem like the obvious (and easy) choice, but some plants do not easily make roots from cuttings. Take redbud (Cercis canadensis, Zones 5–9), for example. The species is famously difficult to root or at least to survive once rooted, so it is generally grafted—or, technically, budded (budding is a kind of grafting).

Large-leaved plants, such as magnolias (Magnolia spp. and cvs., Zones 5–9), though mostly rootable, are sometimes too unwieldy to be comfortably raised in a propagating frame. It’s often just faster and cheaper to produce a salable plant by grafting it onto an inexpensive seedling rootstock. This is certainly the case with cultivars of Japanese maple (Acer palmatum, Zones 5–9). Many maples can be successfully rooted on their own, but rooting percentages and overwintering survival are often low without the use of sophisticated environmental controls and the existence of considerable management expertise. In most cases, grafting is the less expensive option, and the plants tend to grow faster and mature sooner anyway. So grafting is a logical choice, especially for small nurseries.

But back to your question, “Should I care?” The answer depends on what is being grafted. Hybrid witch hazel (Hamamelis X intermedia and cvs., Zones 4–8), for example, is routinely grafted onto seedlings of American witch hazel (H. virginiana, Zones 4–8), and these rootstocks are notorious for suckering, particularly if the graft is not a perfect one. The same goes for contorted hazel (Corylus avellana ‘Contorta’, Zones 5–9), which is typically grafted on straight hazel (C. avellana, Zones 5–9), a naturally suckering tree. In these examples, it’s mostly easy (albeit labor intensive) to recognize the scion (top) from the rootstock, so any offending suckers can be removed. On the other hand, cultivars of ginkgo (Ginkgo biloba, Zones 4–9) are sometimes grafted onto ginkgo seedlings, which can be either male or female (it’s the luck of the draw what sex you’ll get, and distinguishing a male from a female is almost impossible). A female ginkgo produces seeds that are infamous for the rancid butter smell they give off once ripe. Because it often takes more than a decade for a ginkgo to become reproductively mature, that’s a long time to wait for what is potentially a very smelly surprise. So, yes, you should care—particularly when it comes to certain species, like ginkgo, because you might want to avoid grafted options altogether.

With so many annual events such as concerts and awards shows postponed this year, it was especially nice to see that the new-plant rollout for 2021 would still happen. And…

Last summer, my husband and I decided to escape to the mountains, and we took a road trip to Jackson, Wyoming. After arriving at our hotel room, my husband immediately…