While searching for my first apartment in Brooklyn, I was shown a one bedroom on a quiet, tree-lined street. The apartment itself wasn’t memorable, but the building was: The entire brownstone was encased by an impenetrable mass of wisteria, windows and all. Covering a three-story building is no challenge for some vigorous wisteria vines, which are able to grow 10 feet or more in a single season. Yet for all its rampant behavior, a wisteria in full bloom is one of the loveliest sights.

Wisteria can live a long, healthy life with no pruning at all, happily twining, climbing, and sprawling over everything in its path. But for the gardener who has limited space and wants to enjoy more visible and abundant wisteria flowers, a pruning routine becomes a necessary chore. For optimal results, plan for at least a biannual (once in summer, once in winter) pruning regimen. Knowing how the vine grows will also aid in your success.

Living without windows is not for everybody, but with some initial planning and a commitment to regular pruning, no one has to.

Since wisteria flowers develop on the previous year’s growth, pruning wisterias biannually not only keeps these vigorous vines to a manageable size but also creates a system of short branches close to the structure, where you can more easily enjoy the blooms. To accomplish this, simply prune the long shoots of the current year’s growth back to 6 inches long in early summer after the vines have flowered. Also at this time, completely remove any shoots not needed for the main framework of the plant and prune away root suckers, especially on grafted varieties. This type of pruning may be done once a summer or more frequently, depending on how much time you have and how neat you want your vine to look. Keep in mind that many gardeners find wisteria seedpods decorative, so you many want to leave some spent flowers behind.

Some seedpods may be left on the vine for winter interest, but just know that if you bring them inside, warm temperatures will cause them to explode. A friend once used the pea-shaped fruit in a winter arrangement. The next morning, she found her cat crouched in the corner, hiding from the flying seeds.

Winter: Prune long shoots down to three or five buds

In late winter, prune the long shoots that have grown since the summer pruning down to three to five buds. Also remove any of last season’s unwanted long shoots, which will be more apparent now because the leafless framework will be exposed. 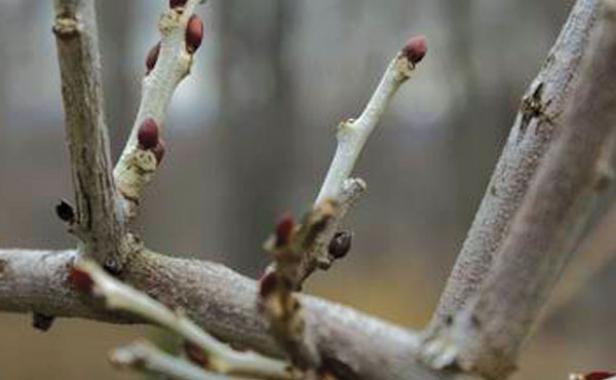 Even short branches should be cut to three to five buds to direct energy to flower production rather than vegetative growth.

Why your wisteria may not bloom

Wisterias are notorious for failing to bloom. Before trying drastic measures, make sure these basic cultural requirements are met.

Seed-grown plants
The most common reason for lack of flowers is the selection of a seedgrown plant over a grafted plant. Grafted plants typically bloom within three years, while seed-grown vines may take upwards of seven years before flowering— if ever.

Fertilizer
Avoid high-nitrogen fertilizer. Like other legumes, wisteria fixes nitrogen in the soil. Too much nitrogen can cause excessive foliage growth and poor flowering.

Training a new wisteria on a pergola

The vigor of the plant makes it adaptable to many forms. Wisteria may be shaped into a shrub or standard, trained against a building or lattice, or grown on a pergola or arbor. Wisteria floribunda is a desirable selection to grow on pergolas and arbors because its long flowers hang dramatically through the top. Only one plant is usually needed to cover an entire structure since it is, like other species of wisteria, such a vigorous grower. Planting two vines at opposite ends,however, gives a structure visual balance and affords a gardener the opportunity to feature two different cultivars on the same structure.

Start with a sturdy structure
Training wisteria to grow on a pergola or arbor is a practice that requires careful planning. In order to successfully use these structures, they must be made of a stout, weather-resistant material like cedar and set securely in the ground with concrete footings. Wisteria is infamous for pulling down its supports, so don’t be afraid to overbuild a pergola or arbor. I recommend that the posts be made of 4×4 lumber and the crosspieces of 2×4 lumber at least.

Train vines to climb
To begin training a new plant onto a pergola or arbor, allow two or three young shoots to twine loosely around each other and the post as they grow. This will help to provide added interest to the plant’s structure, since the woody stems become contorted and picturesque with matur­ity. The young shoots need to be secured to the post as they climb. To do this, attach a 14-gauge galvanized (or similar) wire using eye hooks, spaced about 18 inches apart, along two opposite sides of the post (or on all four sides for extra support). As the shoots grow, tie them as needed to the wire using gardening twine. Allow some slack as they grow to create a more attractive habit and to prevent the plant from putting heavy tension on the structure as the plant matures.

Want to plant wisteria in your garden?