Here's a space-saving setup that eliminates the need for turning

For more on composting techniques and equipment, see All About Compost.

I come from a long line of gardeners. My grandparents, in the ways of the old country, grew most of the fruits and vegetables that reached our table. My grandfather kept a fenced-off area behind the garage known as the manure pile, which was actually two bins where manure, yard trimmings, and vegetable scraps from the kitchen found their way. Fresh stuff was placed into one bin, a month or so later it went into the other bin, and after another month it went into the garden. Because I (or one of my cousins) did most of the shoveling, I learned firsthand how much work making compost could be. I also learned that the final product—clean-smelling, rich, loose material, full of worms—could boost a plant’s production, significantly increasing growth and yield. 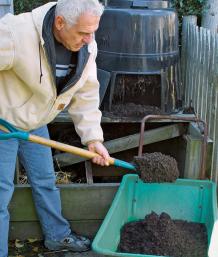 Over the years, I’ve experimented with many methods of composting. My grandfather’s two-bin approach worked well but had some problems. Not everything decomposed at the same rate; some material was still in its original form after two months and had to be returned to the bin. Despite my shoveling from bin to bin, the compost was not getting enough air, which led to slow decomposition.

The common way to aerate compost is to turn it over with a shovel. This turning is the dreaded task that keeps many gardeners from composting at all. Drawing from my grandfather’s design, I’ve developed a system that eliminates the need for turning and yields more compost than I can use.

A basic bin made better

About 15 years ago, my town, through its recycling program, made available 50-gallon plastic compost bins (the type with a hole in the top and a door near the bottom) for about $12. The bottom of the bin featured a perforated screen to allow excess moisture to drain out. I decided to try one, with some modifications.

Commercially sold bins often have little ability to aerate the compost. To increase the aeration of my town-issued bin, I used a saber saw to cut staggered slits down the sides. I then built a wooden platform for the bin about 2 feet off the ground—high enough to get my wheelbarrow underneath. Raising the bin and leaving spaces between the boards of the platform allowed for even more airflow. Compost material broke down faster and more completely. I could rake it through the door at the bottom and onto my screen-covered wheelbarrow without having to use a shovel. But the chore of sifting remained.

Most compost needs sifting before being added to the garden, unless you don’t mind distributing whole eggshells, avocado seeds, and watermelon peels among your plants. For a long time, I sifted my compost by placing a framed screen over my wheelbarrow, shoveling compost onto the screen, and shaking the screen with my hands or moving the compost with a hoe. After a few hours, my sore back would force me to stop. There had to be a better way, so I went back to the drawing board.

For the next version, I mounted a framed screen set at a 30-degree angle beneath the platform. I could then rake the compost out of the bin onto the screen. The angle allowed material to roll downward, with smaller particles falling through to the wheelbarrow and larger pieces accumulating at the lower end of the screen. I used this sifting method for three years until a repair to my garage required that my compost bin and platform be moved. I took this opportunity to redesign my setup to make it even more efficient.

Compost is made from the breakdown of organic material with nonorganic material like minerals and sand added for texture. The heat generated kills any weed seeds and reduces vegetable matter to finer particles. The resulting “black gold”—a loose, odorless, rich source of nutrients—will greatly improve the quality of your soil and the health of the plants that live in it.

WHAT TO ADD
• Garden trimmings and weeds
• Dry leaves
• Vegetable waste
• Coffee grounds
• Apple cores, banana peels, and citrus rinds
• Rice
• Pasta (and the sauce if it doesn’t contain meat)
• Salad greens (and the dressing if it’s made from vegetable oil)
• Breads

WHAT TO BE WARY OF
• Animal products, such as meat, bones, or fats—they will rot and give off bad odors
• Whole eggshells—crush them first to help them decompose
• Shredded paper, except in small amounts and only if the paper doesn’t have a lot of ink or color in it
• Sawdust that it is made from pressure-treated lumber
• Anything that might be toxic to you. Remember, whatever goes into your compost goes into your vegetable garden and ultimately into you.

Tucked discreetly behind the garage but close to the garden, my new and improved composting system is efficient and far less work.

For this design, I placed my modified plastic bin on top of a 4-foot-deep by 5-foot-wide wooden platform, about 3 feet off the ground. With room for two holding areas underneath, I gather material waiting to be composted in one area, while collecting filtered compost in the other. As before, the platform has openings between the boards to allow air to enter the bin’s mesh bottom. I also kept the angled screen that sits underneath the bin; it now moves on a runner that allows it to be pushed out of the way for easy access to the finished compost.

When sifting, I rake compost out of the plastic bin and onto the screen. Letting it sit for a few days to dry out makes it easier to sift. With a hoe or small shovel, I tap on the bottom of the screen to create a bounce. Finer material falls into the finished-compost area below, and larger material goes into the other holding area and eventually back into the plastic bin. This built-in screen lets me sift my compost with minimal effort.

The latest system works better than all the methods of composting I’ve tried. The increased aeration plus the location of the bin in a sunny spot speeds up decomposition. The time from garbage in to compost out is about 30 days during the gardening season. The setup is not unsightly, emits virtually no odor, and is maintenance-free. I put about one hour each week into making enough compost for my garden, with plenty left over to share with friends.

Putting it together is easy

Plastic compost bin
• Bin with a door at the bottom

1. Set the posts. Dig four post holes: 5 feet apart for the back and front and 3¾ feet apart for the sides. Sink the 6-foot-long 4×4 posts at an appropriate depth for your soil type. (I buried mine 3 feet deep because, on Cape Cod, we have only sand to dig in.) You may want to cement in the posts for added stability.

3. Create a divider. Place the two 3¾-foot-long 2x10s in an upright position on their longest side, ap­proximately 20 inches in from the left side. Nail the boards in place from the rear. If you have attached the front section, nail the divider in from the front as well. For added support, drive a stake into the ground on either side of the divider.

4. Screw in the support. Attach the 3-foot-long 1×1 support using three 2-inch screws to the right side of the bin, about 5 inches below the top. This piece will support the screen on a slope.

5. Place the top. For the top of the plat­form, nail down the three 5¼-foot-long 2x10s starting from the rear, leaving 1 inch between them.

1. Make the the frame. Screw together the 2x4s us­ing the 3-inch screws to make a rectangle roughly 2 feet long by 4 feet wide.

2. Affix the screen. Staple hardware cloth to the bottom side of the rect­angle to create a screen.

3. Attach a runner to the frame. Screw in the 2-foot-long 1×1 using two 2-inch screws across the bottom of the screen, about 10 inches from one end, to make the runner. This piece rides along the divider and allows the screen to move back and forth.