I’m Beating Up On Lawns, Again

I hate the word “hate.” It’s so absolute and intolerant. Once you decide you hate something, it’s sort of hard to find the sunny side and see the other guy’s point of view.

I find it especially perplexing when hate is applied to a plant that can be made into wine and coffee (have a few drinks and sober up in one fell swoop?); eaten as a nutritious, tasty side dish; enlisted to treat infections, warts, and as an anti-inflammatory; attract beneficial insects, feeds honeybees, and ward off zombies (I’ll have to check on that last fact and get back to you); aerates the soil; and whose botanical name (Taraxacum officinale) means “Official Remedy for Disorders.”

We’re talking about none other than the DREADED DANDELION! (Bonus factoid: The name comes from the French dent de lion = lion’s tooth). Dandelions are on my radar this week thanks to a blog post at the ever-cheeky, sometimes-frothing-at-the-mouth, let’s-stir-up-the-pot-and-see-who-comments Garden Rant blog.

Susan Harris took on the Coalition to Stop Dandelions (there’s no list of the members for this “coalition”, so I’m guessing it’s a figment of the PR consultant’s imagination) for their vaguely worded, poorly reasoned campaign. They’re blaring about the trumped up “dangers” of dandelions in hopes of getting people to fork over their hard-earned bucks for a soil test kit. The CSD says soil tests are the key to stopping the Insatiable Scourge of Suburbia. Good luck with that.

As I read Susan’s rant, I couldn’t help but think about how successful the big lawn-care chemical companies have been at brainwashing the masses. It’s no wonder they succeeded, what with the millions of advertising dollars they throw into their multi-billion dollar business.

Dandelions get a bad rap because once the suburban migration started after World War II, these corporate merchants of everything toxic launched campaigns to convince homeowners that the only way to be a responsible member of society (and avoid the disdain of their neighbors) was to aspire to that monotonous, imagination-free dead zone called the perfect lawn.

They convinced almost everyone that dandelions – those little grantors of kids’ wishes that send hundreds of seed-bearing parasols drifting on the breeze – were the enemy. Actually, it’s mostly dudes who can’t leave their Hot Wheels obsession on the third grade playground, so they get their testosterone fix wheeling about on big-kid mowers – watch the commercials and tell me I’m wrong.

Which brings me to the Lawn Reform Coalition and our campaign to promote positive change in the garden. If you received the Fine Gardening eLetter this week, you saw the first article I wrote in 2009.  I’m one of the founding members of this diverse group, working to bring a new perspective to gardens, and hoping to educate the public about the serious environmental impacts of typical lawns. We’re talking about: the fouling of waterways from fertilizer and herbicide runoff; the toxic brew that affects humans and pets; the unconscionable waste of precious potable water to keep those symbols of conformity unnaturally green year-round; the single-species palette that provides zero habitat for birds, bees, and beneficial bugs; and the air pollution, fossil-fuel consumption and noise of power tools.

I’m probably the most rabid of the Lawn Reform Coalition members, living in SoCal where the threat of water shortages is a never-ending cycle. For the life of me, I can’t understand how people sleep at night knowing that they’re squandering the single most important resource on this groovy green globe, all for the vanity of hearing neighbors compliment them on their misguided efforts. 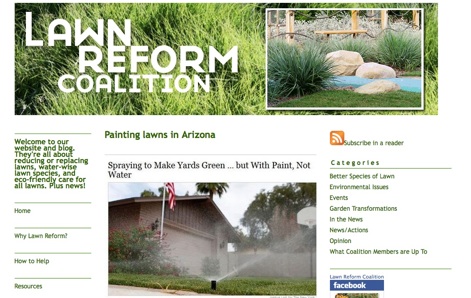 The big question for me is, why the fascination with lawns? When done “right”, they are nothing more than an uninterrupted swath of green, laser perfect in its topography. Yes, mowed turf serves an indispensable role as a soft floor for recreation (and nude sunbathing), but nobody lets their kids play in the front yard anymore, even if you could pry them away from their X-Box 360. So what’s it doing in the front yard, anyway?

If you can’t bear the idea of a completely lawnless home, can’t we at least put our front yards and our dwindling resources to a higher use? I think so. Redesign your frontage with plants adapted to your area, especially local natives. Learn about each plant’s behavior and its cultural needs so you can choose and place them intelligently, without causing maintenance black holes. Manage your garden with a light touch, and without using fossil fuel-powered tools, toxic concoctions, and generating excessive green waste.

I’ve skittered off tracks a bit from Susan’s rant, but sometimes, all it takes to vault me out of the garden an onto my soapbox is a little poke. Thanks Susan, and thanks for listening.Grow food! Ivette Soler’s marvelous new book, The Edible Front Yard: The Mow-Less, Grow-More Plan for a Beautiful, Bountiful Garden, will get you started and knock you out with gorgeous ideas for integrating edibles with ornamental plants. 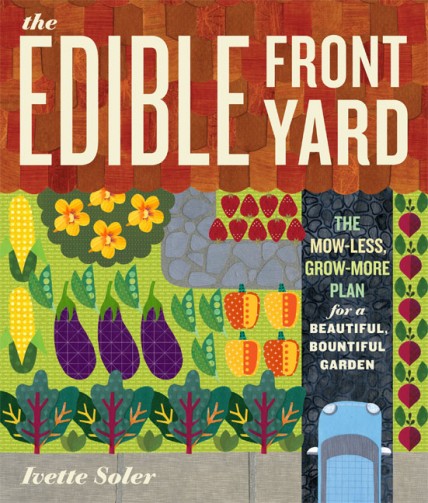