In Britain we have a lot of hedges.

Imagine you are a Medieval farmer looking for a way to stop your few sheep or cattle from straying. Currently your only option is to follow them around the place making sure that they are not devoured by passing wolves or stolen by vagabonds and outlaws. Soon you get a bit bored of this and decide that you want to enclose the fields around your farmstead so that you can keep an eye on the animals from the comfort of your kitchen.

Wire has not yet been invented, wood for fencing would be impossibly expensive – to say nothing of the effort involved in hand sawing posts and rails. It you lived in, for example, the Cotswolds or Yorkshire then you would would wander around your field digging out stones with which you would build good walls behind which your stock could shelter. 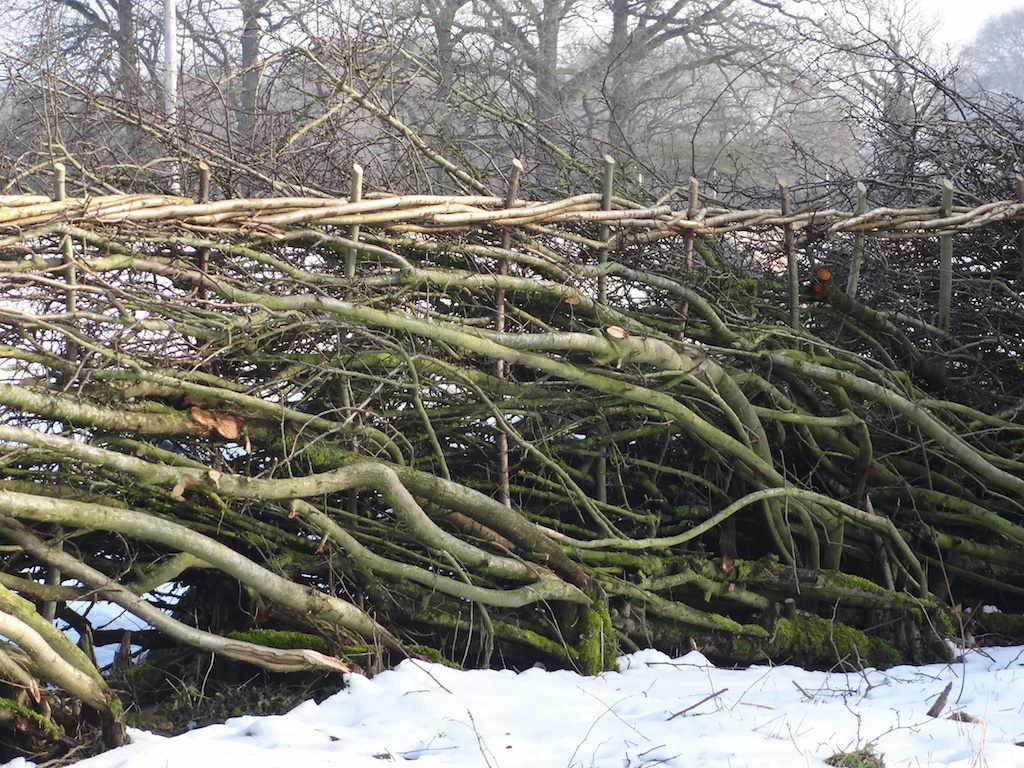 However, what if you live in a part of the country that is not so blessed? You have stone free fields. What are you going to do? The answer is to plant a hedge: field hedges are always planted in the late Autumn and Winter using “bare rooted whips” which usually arrive in the nurseries in November. A whip is a young plant somewhere between 18″ and three feet tall with a small but adequate root system. A perfect field hedge will be 60% Hawthorn with the remainder made up from other native plants depending on conditions. It will be planted in a staggered line using at least four plants per metre. This is way it has been done for hundreds of years.

But the job is not over yet: your hedge is not strong enough to stop a determined cow from wandering straight through. There is a solution but you need to wait about eight years by which time your hedge will be ready for laying. This is the craft of turning a straggly old hedge into a tightly woven screen of living trees and shrubs strong enough to keep sheep and cattle firmly penned in just as effectively as a barbed wire fence. 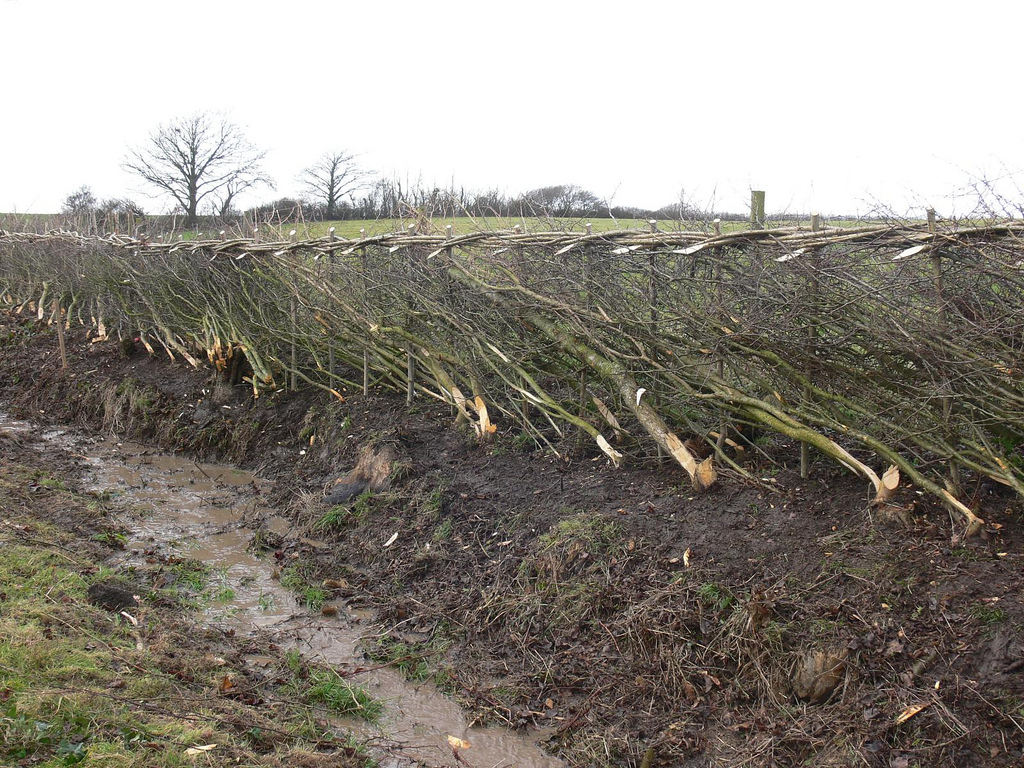 Laying a hedge involves taking a hedge of at least eight feet high and cutting most of the way through the stems to form a hinge of pith and bark which allows the tree to be laid flat on the ground to form a horizontal barrier. These are the “pleachers” which are then locked in place by a series of stakes driven into the ground between the flattened stems and topped with a plaited line of binders (or heatherings) usually made from hazel weaving in and out of the stakes. The trees continue to grow and become a lower, denser and more manageable hedge so the end result is a living fence which is secure (lots of thorns), beautiful (lots of flowers and berries) and, most importantly, a perfect environment for a plethora of birds, mammals and insects. 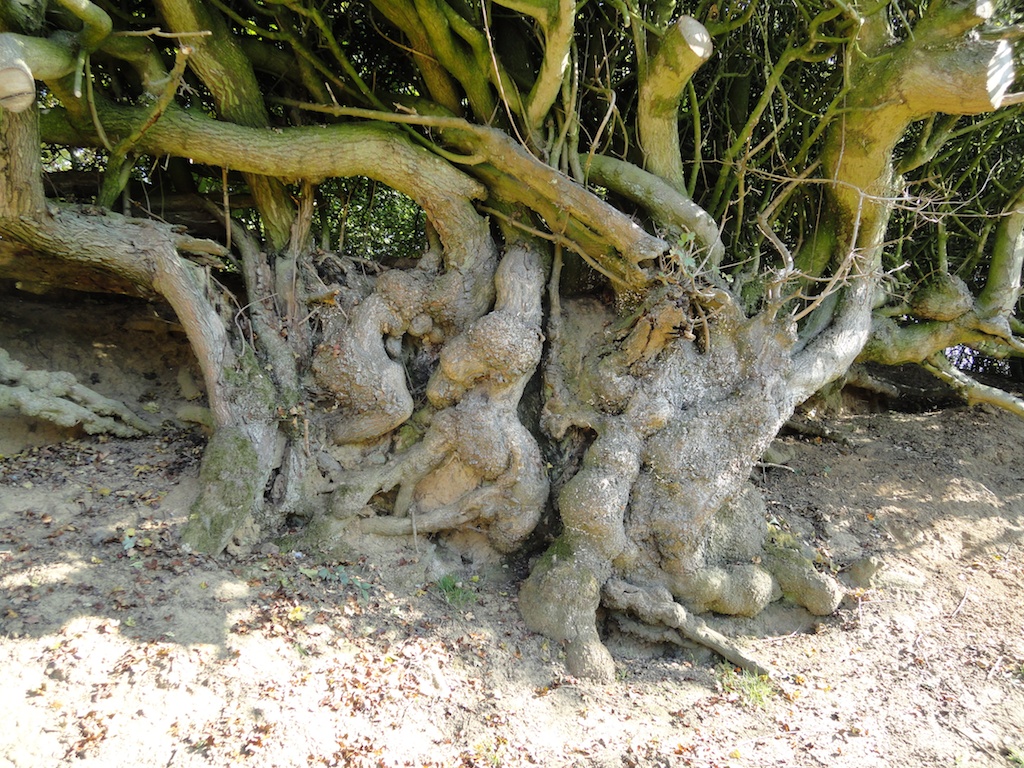 The actual propcess of laying hedges in subtly different in the various corners of the country – the process roughly described above is the technique used in the Midlands. There are fiercely fought hedglaying competitions all over the country.

Fields have been created like this for thousands of years – Julius Caesar writes of them as a dashed inconvenience to his cavalry who had never come across such things before and Richard I (the Lionheart) decreed that hedges should be no higher than 4ft 6″ so that he could easily jump them while deer hunting.

A well planted and laid hedge is a delight. In early spring the blackthorn flowers first – white flowers before the leaves unfurl. Followed by the Hawthorn which, more conventionally, bursts out after the leaves have emerged. Then pale pink dog rose and the white tubular flowers of the Wayfaring tree (Viburnum lantana) follow. The hedge is full of nesting birds and scuttering voles all summer and you end up with a larder full of bird food in the autumn. The red berries of the Viburnum opulus, black sloes and shiny haws.

Since 1945 we have lost about 300,000 miles of hedge line due to development, road building and changed farming practices and every little we replant gives new homes to innumerable birds, bugs and small mammals.

Which is why I try and plant at least one hedge every winter.