The secret to a lush, balanced design might be more straightforward than you think 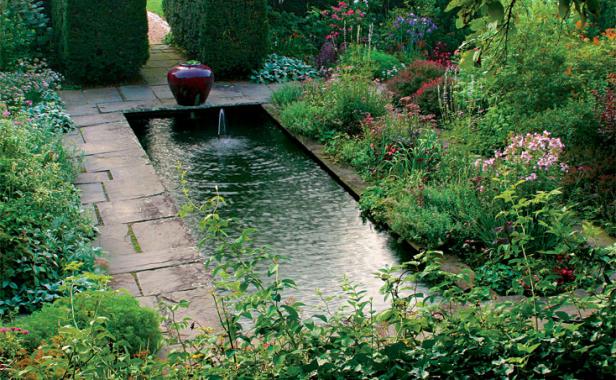 My garden at Hollister House is often described as an English garden, and it is true that my first inspiration to make a garden stemmed from a trip I took 33 years ago to England, to visit gardens such as Sissinghurst and Hidcote. These places seem to strike an effortless balance between a dignified formality and a loose, natural planting style. When I began to plan my own garden more than 30 years ago in the hills of northwest Connecticut, this was the sort of garden I wanted to make.

The result is different from what most American gardeners aim to create, yet most of my visitors tell me they love my garden. I think that much of the garden’s appeal comes from its formal structure, which is not
always apparent but firmly underpins and contrasts with a relaxed, almost wild planting style.

Americans, for the most part, have never been keen on the idea of formal structure: There seems to be something intrinsically off-putting about the word “formal,” probably because it is often interpreted as “rigid” or “limited.” No wonder most of us here in the land of liberty eschew formality and espouse, instead, what we call a “natural” look.

The trouble is that the absence of formal structure does not automatically result in a convincingly natural garden. Just because a garden is designed around curves and kidney shapes doesn’t mean that it looks natural. A successful naturalistic garden is designed so that we are not aware of its structure because the plants themselves provide most of the structure. This sort of design demands a high degree of talent and effort.

A formal garden, on the other hand, with its straight lines and right angles, doesn’t need plants to conceal its structure because the structure is woven into the aesthetic itself. It’s actually an aesthetic that is more attainable.

Formal structure is not the subversive threat to freedom that so many suspect it to be. Our homes, offices, and even our automobiles are designed along straight lines and right angles, so it seems perfectly natural to me that my garden is composed of rectangles. This doesn’t mean the garden feels rigid. On the contrary, its loosely and irregularly arranged collection of rectangular spaces might best be described as informal.

The separate sections of the garden—or “rooms” as the English are apt to call them—differ in size and shape, offering variety. There is a wonderful sense of drama as you walk through an opening in a hedge or wall from one room to another, and the change of scene can be exciting. Even though this collection of small separate spaces may seem eclectic or haphazard, there is actually a carefully plotted progression from room to room that unifies the garden.

One would expect perfect symmetry from so many strong lines, but there is very little of it in the plan at Hollister House. Entrances between different sections are usually not placed at the centers of walls or hedges but toward their sides. Entrances in less-than-predictable places lend themselves to the garden’s spontaneity. All of this provides an appealing and intimate feeling.

My garden’s formal plan enables me to be much freer and more natural in the way that I grow my plants. Far from limiting a gardener’s choices, a well-thought-out plan makes it easy to place plants so that each is presented to its maximum effect. I like a generous abundance in my borders, and I often encourage the plants to grow together in a wild, unrestrained manner, which might seem messy or overgrown if it weren’t for the firm network of walls, hedges, and paths holding the whole composition together.

Plants also help me keep the many individual garden spaces varied and interesting. Well-behaved low-growing plants inside the boxwood-lined beds of my parterre are selected so that no two beds are alike, although each is similar in effect. In the perennial borders, I employ more exuberant plantings so that neighboring neat and tidy combinations seem cradled by a generous burst of abundance.

The
effect is a healthy conflict between order and chaos, a
dynamic balance of opposites that I am convinced is

one of the secrets of my garden’s success and made possible by structure. 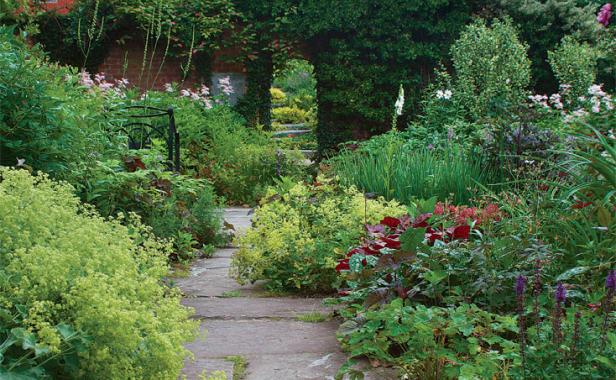 The structural frame, however helpful it might be, is not absolute. I like to blur its edges now and then for a more relaxed effect. A good way to soften straight lines is to allow plants to spill out over the edges here and there at irregular intervals. The geometry is still present but less insistent. A jog in the path, caused by a shrub or spilling plant disrupting the line of sight, helps break the monotony. Better yet is a low-growing shrub that allows the eye to catch just a glimpse of the view beyond. Steps and stairs are also helpful because they
interrupt flow and force strollers to pause, look down, then resume their journey.

Another trick I have learned about designing with straight lines is that they shouldn’t continue too far without a break. This is certainly true of paths. A long, straight path becomes oppressive if it never deviates and the eye is forced to follow it without relief. Even when there is a focal point at its end—say, a statue or bench—
it is often too distant and seems unattainable. The path fails its purpose of drawing us forward and inviting us in because it is too daunting.

In a rectilinear design, some of the most exciting views are to be had by looking across the garden on the diagonal. Keep this in mind while laying out garden structure, as I did when I designed a square boxwood parterre slanted at a 45-degree angle along the top of my 8-foot-tall retaining wall. The geometry may be a little unusual, but it creates a subtle tension that keeps the design from becoming static.


By embracing formal lines and structure, exuberance and creativity are infused with a rigor and interest they’d otherwise lack. Formality is nothing to be afraid of.