Keeping these beautiful bloomers healthy and happy couldn’t be simpler

I know many gardeners have a strong aversion to division. But as a gardening mentor of mine used to say, if it’s all right to remodel the house, it’s all right to remodel the garden. And as the royalty of the spring and early-summer garden, most irises need division every three to five years to maintain their glam and charm. Not all irises, though, are created equal. At the faster end of the spectrum, bearded irises can quickly increase over just a few seasons into overcrowded, floral nothingness, which isn’t exactly beautiful (unless you have a strong taste for spiky green foliage). They’re most often in need of division earlier than later. On the slower end, Siberian and many beardless irises can practically be ignored for years without any general loss of floral display, though, eventually, they’ll need a good roughing up.

So what’s a gardener to do with a clump of overcrowded irises? Grab your favorite spade or digging fork, and dig in. Dividing irises couldn’t be more fun. It’s a great stress-relieving activity, and it’s pretty hard to foul up. Here’s the scoop. 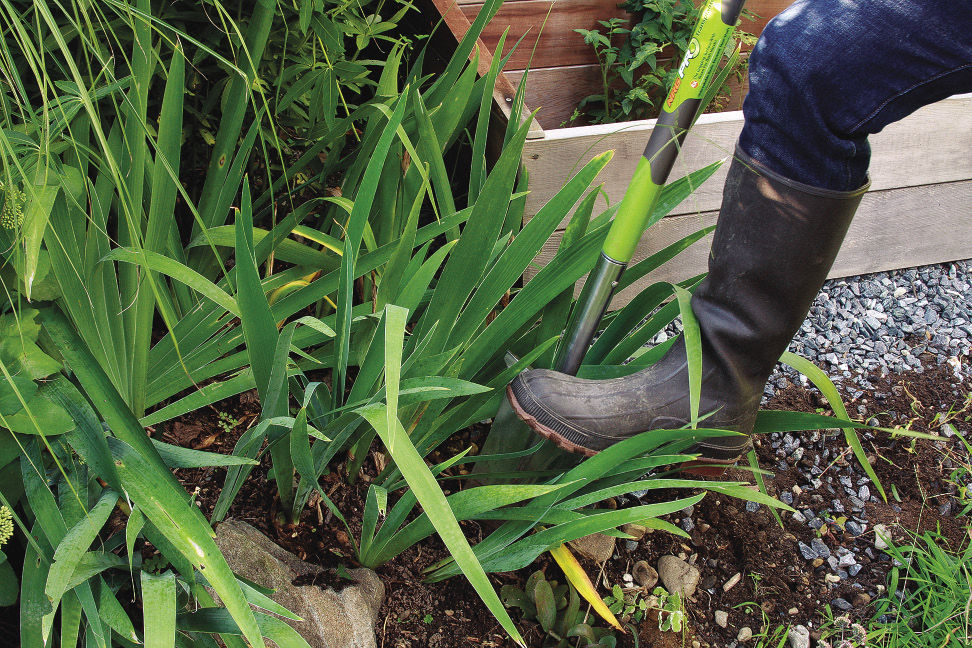 1. Lift the Entire Clump with a Spade or Fork

Expose the clump using a spade or fork. Take care to shake off as much dirt as possible; this makes the rhizomes easier to work with. You might find that a fork speeds up this process because it won’t lift as much soil with the rhizomes. Once your clump is exposed, you’ll likely find lots of green fans and rhizomes growing close together or directly on top of each other. 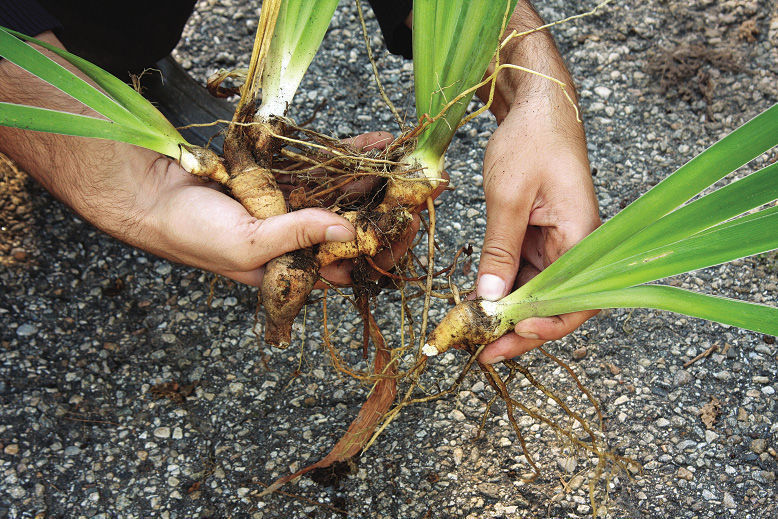 2. Split the Clump into Smaller Pieces

Using a sharp knife or your hands, separate the clump into smaller pieces, either as miniclumps with two to four rhizomes each or into individual rhizomes. If the rhizomes seem small, you can leave them attached to larger, mother rhizomes, which will act as a sort of life support until they develop further, but you’ll find that even small rhizomes will be just fine. If there are any rotten spots on the rhizome, cut them out with a sharp knife and quickly dip the rhizome in and out of a 50/50 bleach-and-water solution to stop the spread of disease.

3. Trim Back the Foliage by at Least Half 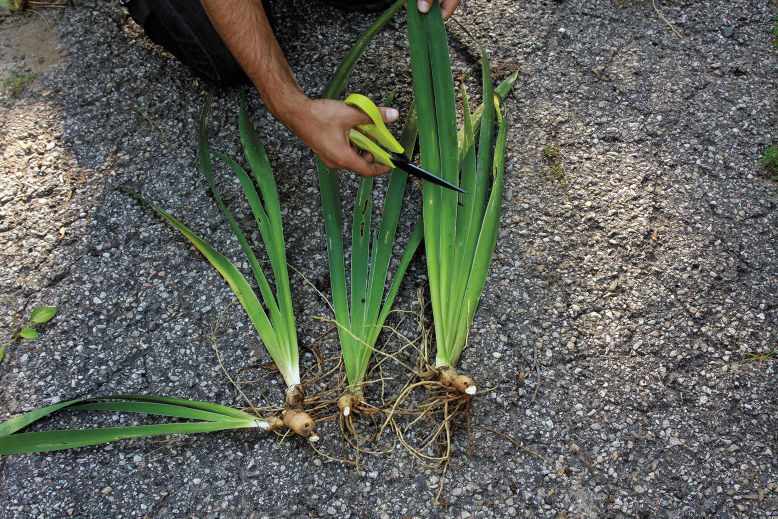 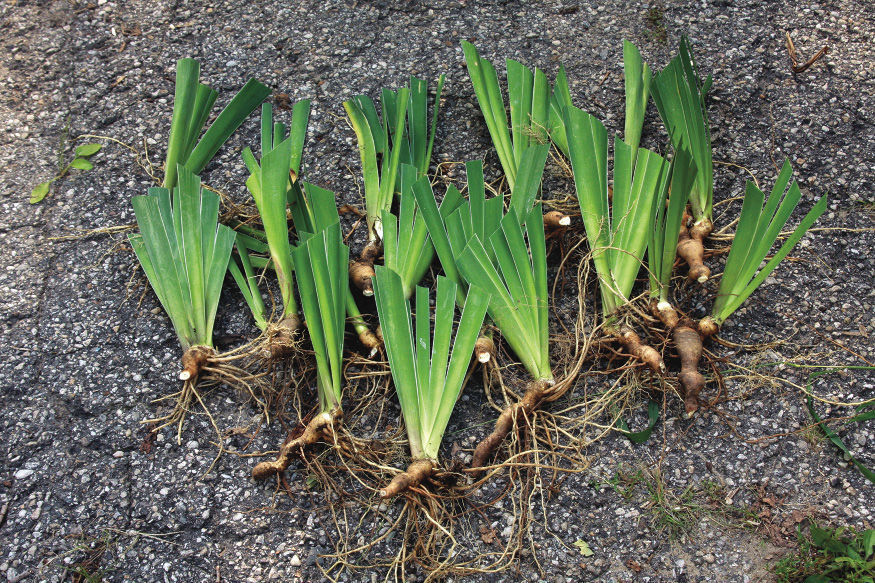 Trimming the foliage (photo, above left) allows the plant to recover quicker, creates less of a mess in the garden, and makes the plants easier to handle. Consider this: Newly transplanted plants lack a fully functioning root system, which means they deliver nutrients to the leaves at a slower rate than they would normally. If a handicapped root system has to support the development of new growth plus maintain all the growth the plant had before transplanting, it can take some time for that new plant to establish. In a nutshell, cutting back the foliage reduces the load on the developing root system. The foliage is traditionally cut into a fan shape (photo, above right) to mimic the natural form of the foliage, but it’s not necessary. 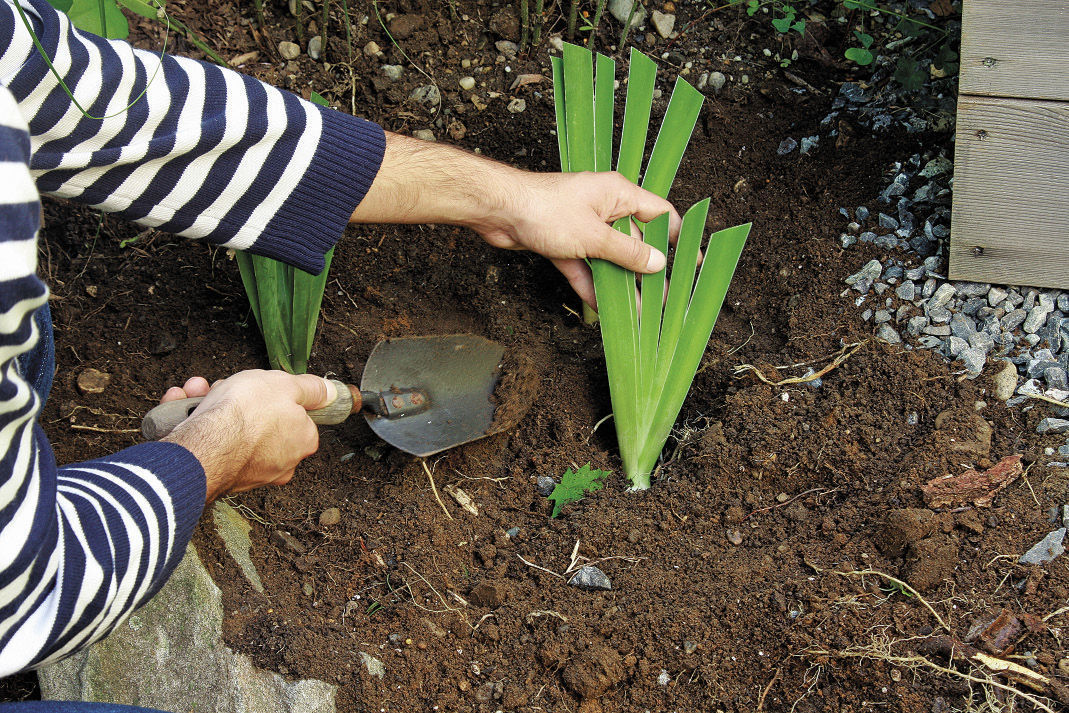 Once you have a pile of freshly clipped rhizomes, you’re ready to plant as you normally would. Site them in full sun and well-drained soil, give them some room to grow in abundance, and keep them tidy every spring by clearing debris away from the crowns. The only thing you’ll have to worry about is dividing every three to four years, depending on how fast they grow. Some cultivars will probably need division after only two years (the ones you already have too many of anyway), while others will be just fine well into their fifth season.

Does My Iris Need to be Divided?

Here are the usual warning signs:

Poor or no flowering

Both crown rot and soft rot are “misery-loves-company” diseases. The closer that plants are to one another, the easier it is for diseases to spread, leaving behind mushy rhizomes and collapsing foliage.

When should I Divide? 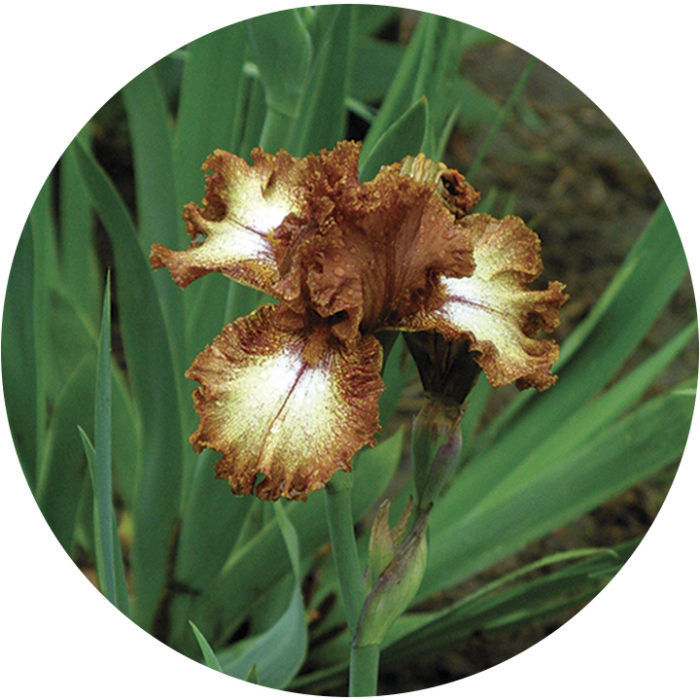 In northern climates, start dividing clumps of bearded irises just after the July 4 holiday to give the new offsets time to establish before cooler weather sets in. Because you’re dividing and replanting in the heat of summer, water your new transplants every other day for the first seven to 10 days so that they don’t languish. Gardeners in southern climates can push the deadlines into September and October, depending on the exact date of frosty weather. Bearded irises will have the best chance of surviving winter if planted four or more weeks before the first hard-freeze date. 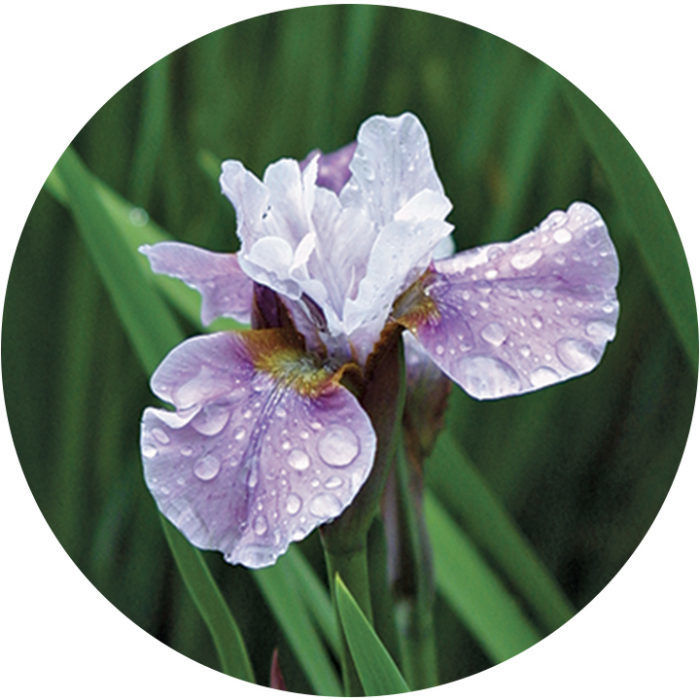 Spuria, Siberian, Japanese, and other beardless irises should be divided later than bearded irises—after the last wave of summer heat passes—because they bloom a bit later and despise being transplanted in high heat. Don’t wait too long, however. While beardless irises are more forgiving of frosty weather, their fibrous rhizomes heave just as easily as those of bearded irises in northern climates. So give them time to anchor themselves in the soil before cold weather arrives.

Kelly D. Norris is a horticulturist and the manager of Rainbow Iris Farm in Bedford, Iowa.