A Design That Defies Deer and Drought

By embracing the challenges of your site, your garden will flourish in its surroundings

Julia Zarcone and David Patmore have been embracing the green movement for most of their lives. Their home sits on a 3-acre hilltop in Los Altos Hills outside of the San Francisco and is constructed with straw bales. Throughout their home, huge picture windows overlook the magnificent Santa Cruz Mountains. They asked me to create a garden that would seamlessly tie into the surrounding mountains while maintaining their simple vision: No water, no pesticides, no pretense. That sounds simple enough, but there were plenty of challenges that came along with this “simple” request. We found a way to turn these challenges into successes by taking cues from the surrounding landscape.

The biggest challenge was creating an intimate garden in such a huge space. How could anything possibly stand up to the overpowering beauty and scope of a mountain range without becoming lost? Whenever I’m faced with trying to create a garden in a large space, I find that dividing the space into visually manageable sections allows the eye to take it all in. So I carved the space into four separate areas with the use of gently winding paths. Now, the mountain range doesn’t overpower the area but rather acts as the garden’s walls, bringing down the sheer size of the space into something that’s easier to digest visually.

I didn’t want this garden to stick out like a sore thumb either. The plants had to blend in with the surrounding vegetation as well as with the Southwestern adobe–inspired style of the house. First, I chose plants that are native to our area, such as a monkey flower (Mimulus aurantiacus, USDA Hardiness Zones 7–11), ‘Julia Phelps’ California lilac (Ceanothus ‘Julia Phelps’, Zones 9–10), and matilija poppy (Romneya coulteri, Zones 8–10). By blurring the line between what is growing in the garden, the two spaces seamlessly connect. Second, I chose plants with a mounding and billowy habit, like ‘Powis Castle’ artemisia (Artemisia ‘Powis Castle’, Zones 6–9), Jerusalem sage, and lavenders (Lavandula spp. and cvs., Zones 5–9) to mimic the mounding mountains.

Third, I chose colors that would harmonize with and complement the iron oxide color of the house, like the yellow of ‘Moonshine’ yarrow, the purple of ‘Walker’s Low’ catmint (Nepeta × faassenii ‘Walker’s Low’, Zones 4–8), and the burgundy of Cherry Bomb®  Japanese barberry.

And finally, I placed smaller, tighter plants like prostrate germander up front, and the largest, most billowy plants, such as lion’s tail (Leonotis leonurus, Zones 10–11), toward the back of the garden to draw the eye down, then gently up toward the mountain range.

There’s a phase I heard once that applies here: “The only thing that separates hell’s heat from this place is a screen door.” There isn’t a hint of shade on this hilltop. On a hot summer day, temperatures can be blistering at more that 100°F. Whatever I planted had to be able to withstand long days of withering, incinerator-like conditions. As if that weren’t enough, the plants we chose had to be able to survive with little or no supplemental watering. California has been in a drought for the past few years, with no end in sight. Los Altos Hills—along with most of California—now has strict water limits in place. Combine that with our climate’s typically dry summers, and you’ve got an incredibly hot and dry environment.

We chose plants native to California and to the Mediterranean, which are naturally adapted to hot and dry climates. Plants that fall into this category typically have characteristics that enable them to withstand the heat: Their leaves are gray, thick, or fuzzy, all of which act as a protective layer. I had to be careful, however, not to choose too many gray-leaved plants as color makes an area seem visually hotter that it is. It’s important to mix in plenty of green or burgundy plants too add a lush element to the landscape. Some of these are green-leaved lavenders (Lavandula heterophylla, Zones 7–10, and L. dentata, Zones 5–9) and ‘Tuscan Blue” rosemary, and the maroon foliage of ‘Efanthia’ euphorbia and purple mountain grass (Pennisetum setacum ‘Rubrum’, Zones 8–11).

Deer are a constant presence

Because the property is smack-dab in the middle of the mountains, the sheer amount of deer roaming the site is overwhelming. California has little to no summer rain; by August, the hillsides have begun to dry up and the deer become hungry enough to eat just about anything. And the plants that are supposed to be deerproof? Forget it. At best, they’re deer resistant, and even then, each individual deer’s appetite is different from the next. While working on the site, the deer would follow me around like pets, sometimes lurking just a few feet away from me, waiting to see what I had brought them to eat.

When dealing with the deer and other nonstop eating machines, I’ve found that playing the numbers game is effective. By planting a wide variety, of deer-resistant plants, you won’t end up with an entire section of your garden decimated should the deer develop a taste for one particular plant. I also had luck planting several varieties of the same species. I found that, for example, some salvias (Salvia spp. and cvs., Zones 5–11) considered delicious hors d’oeuvres, while other varieties were completely shunned. I could easily replace varieties that had been eaten with those that had not and still maintain the integrity of design.

Timing is also important when planting a garden that’s visited by deer. The best time of year to plant is spring, when deer have lots of other options to eat in the surrounding hillsides. The worst time is late summer or fall, when the hills dry up and the deer are starving. As for any other small critters that happen to drop in, the family cat does a good job of making a dent in their population.

By taking cues from the surroundings, choosing plants that are adapted this climate, and accepting the local wildlife, we’ve created a garden that works with nature and not against it.

Deer-resistant plants have a lot in common 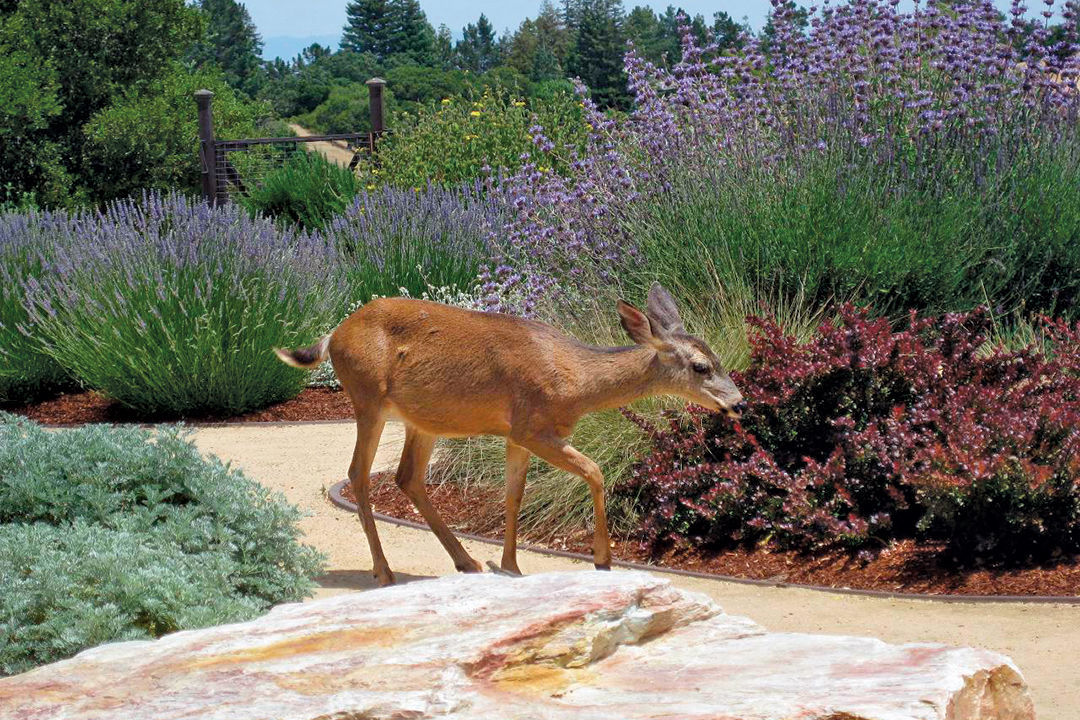 The reasons are many—as well as mysterious—why deer consider some plants a delicacy and others something to avoid. Plants touted as “deer resistant” tend to have some characteristics in common: Their foliage is fuzzy, highly aromatic, thick, or thorny, or it contains some soft of irritant. Keep these factors in mind when purchasing plants that you want hungry deer to ignore. Here are some of the plants that deer eschew in this garden: 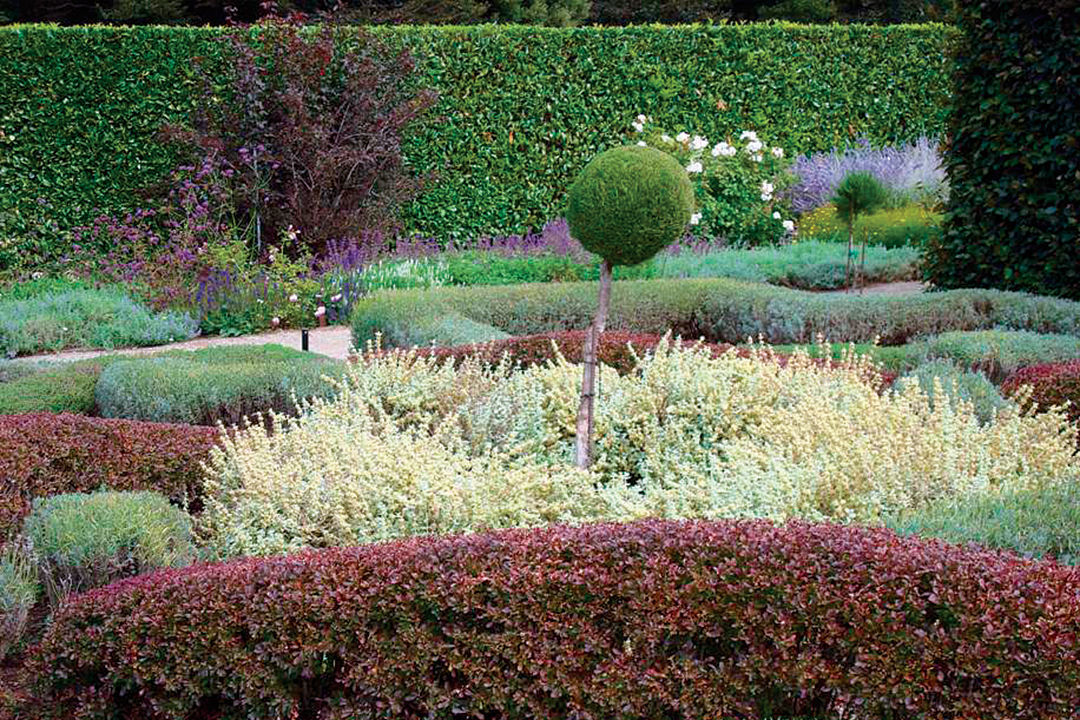 Filoli is one of Northern California’s most impressive estates, and its famous knot garden is the inspiration behind this design. I’ve always loved knot gardens and the way the plants seem to weave under and over one another in a Persian carpet sort of way. By abiding by some of the classic knot garden’s design elements and altering others, I was able to achieve in this casual California garden the desired weaving effect of a traditional knot garden without the fussiness that it usually entails. 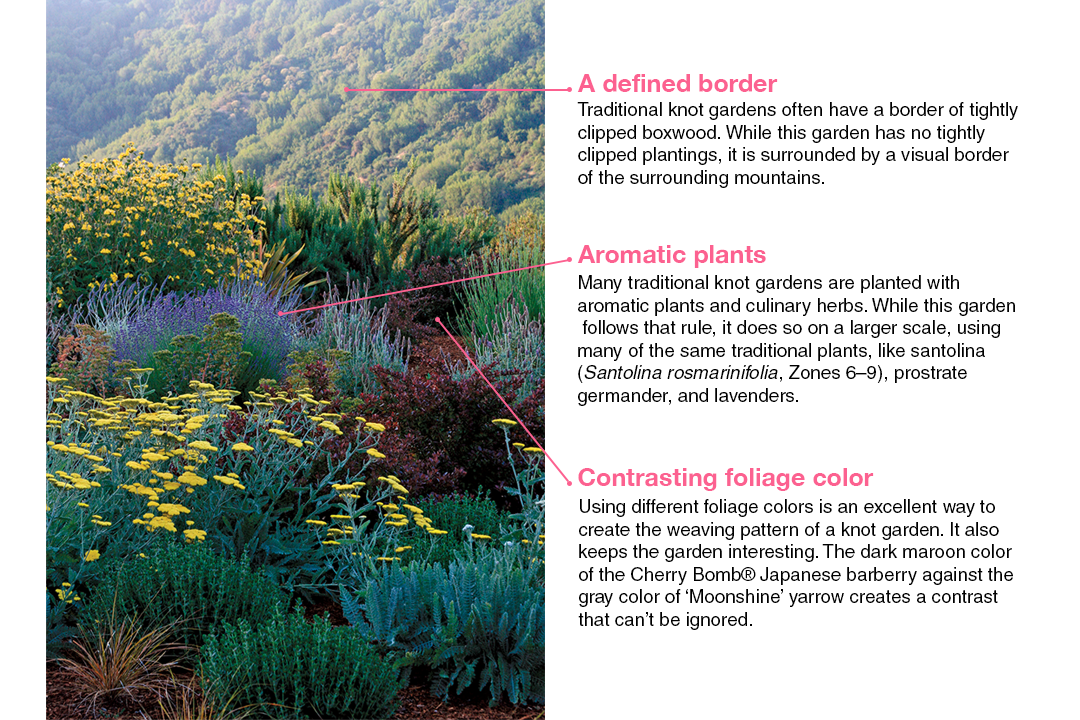 Rebecca Sweet is a garden designer in Los Altos, California.