Gardens have the power to evoke emotion and drama—one area may feel open and spacious; another, cozy and intimate. Yet what I enjoy most about gardens is experiencing the movement from one area to another. It allows me to participate in that garden, whether I created it or not.

Transitional areas, by their very nature, connect two distinct spaces. These spaces may be very similar in character or vary considerably from one another. Whether paths, steps, gates, landings, grade changes, or plantings are used to segue from one garden room to another, such areas should be carefully designed to signal a change in place or experience. Sometimes these transitional spaces themselves are sub-rooms that have a charm and character different from the spaces they are linking.

Start by defining the spaces

No matter how large or small a residential garden, there should be a sequence of experiences equivalent to an approach, an arrival, and an invitation to participate in the garden itself. But to achieve continuous physical movement through a garden, you must first identify the potential outdoor spaces or rooms that surround your home. Clues for defining outdoor rooms are often found by studying the existing conditions of a site. For instance, a wall of your house or an outbuilding may double as the wall of a garden room. Existing trees and shrubs, expanses of lawn, topographical changes, and views also define spaces. Once these outdoor spaces have been identified, you can link them so the flow from one area to another is smooth and experiential.

My own garden, which scales a steep hillside, consists of a series of rooms: a small, semi-public room at street level; an entry courtyard near the front door; a small, terraced area for dining; a courtyard garden out back; and an intimate sitting area beneath an arbor near the corner of the lot, just big enough for two people (see the Site plan, below). These areas are connected by a series of paths and steps wending their way through the property, often creating garden rooms of their own. 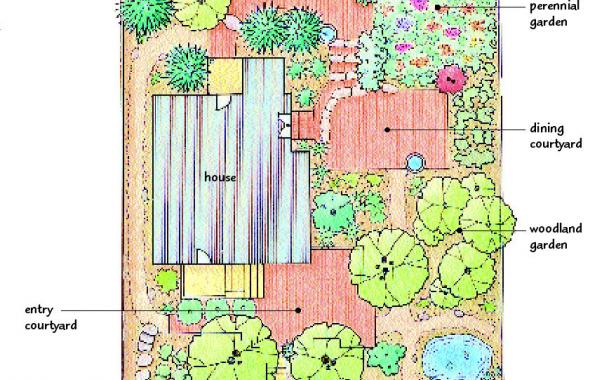 Pathways lead to a destination

The nature of paths is that they connect one place to another and lead to a destination. Quite often, the destination is visible at the end of the path or just beyond it in the form of a focal point—perhaps a sculpture, statue, or bench that draws our attention.

In my own garden, a woodland path along the side of the house connects the entry courtyard to the dining area. As I walk along the path, I can see the dining table, slightly obscured by the tree canopy, which lures me to the terrace. This interrupted view actually helps make the arrival more eventful and appealing.

Not far from my terraced courtyard is a small sitting area beneath the arbor. The space between them was the sunniest spot in the garden, so I knew it would be best reserved for perennials. Instead of making a walkway along the edge of a perennial border, I created a narrow path that meanders through the border, so the walk becomes a participatory experience, letting you focus on the floral details as you move from one space to another. By adding points of interest between the destinations, I was able to create a greater sense of depth in this garden.

Grade changes indicate that you’re entering a new space, so locate your property’s natural grade changes and try to incorporate steps in your design. Even a single step can create an effective transition from one space into another; a flight of stairs can be dramatic.

Between the sidewalk and the reception area near my front door, a long stairway ascends the steep hillside. The steps signal that you are leaving the public space and entering a private garden. Steps act much like a pathway through a garden, except that the elevation gain further emphasizes a change in environments.

A less dramatic, but equally important grade change occurs between the small dining area and terraced courtyard. Three broad steps connect the two spaces, as well as provide access to the kitchen door. Because they are made of stone and brick that match the terrace materials, they create a subtle and pleasing transition.

Landings: a place to pause

The landing just outside your door plays an essential role in creating a transitional space between your home and garden. Because of this, landings—whether a single, broad step or a covered porch—should, ideally, incorporate materials that reflect both the house and the garden. For instance, a porch would most likely be made from the same construction materials as the house, but its posts may be draped in vines. Or, you could use materials for the flooring to provide the garden link.

Landings also provide a place to pause and experience the surrounding landscape. For this reason, landings are sometimes placed throughout the garden. A good example is the landing that I placed at the top of my stairs that lead from the street, where you are forced to pause and look around the garden. On your way up the hillside, there is also another landing where you can catch your breath. On a sunny morning, I often sit here and watch the birds.

Trees and shrubs are the bones of a garden and, with careful placement, can define the rooms that help make a garden feel inviting. They can also serve as transitional elements. For instance, a tree at the edge of one outdoor space may also mark the entry into another area. I have an elegant, multiple-trunked vine maple (Acer circinatum) at the edge of the entry courtyard introducing my woodland garden and path. And two 60-year-old false cypress trees (Chamaecyparis lawsoniana ‘Allumii’) thrive opposite one another at the top of the stairs, marking the transition from the hillside garden to the entry courtyard. Their huge, drooping, multibranched trunks create a fascinating and comforting canopy to pass beneath before approaching the house.

When connecting two open spaces, it is helpful to narrow the passage between them. I used this approach effectively between the two brick terraces. In addition to the grade change marked by the three broad steps, the garden closes in on this space for a more intimate transition. And the fragrance that fills the air when you brush against a large rosemary on the way to the upper terrace instantly puts your senses in touch with the garden.

Use structures to signal an entrance

Arches, gates, low fencing, or large containers flanking an entry all help mark a transition. I have used these elements throughout my garden. For example, after climbing the stairs from the street, the front gate marks the transition into a more private space. A small arbor or arch could be used to similar effect, requiring you to pass through it into the next space. In the backyard, I use a low, split-rail fence to identify the beginning of the perennial garden path as it leads from the large brick terrace. Its rustic construction signals that you are moving into a more informal area.

Throughout the garden, I’ve also used large containers—sometimes with plantings, and sometimes just filled with water for the birds—to highlight the point at which you move from one area to another. They also serve as focal points, drawing your eye through the garden, encouraging you to explore just a bit further down the garden path.

A simple change in paving materials can signal a transition. Stepping from my mulched woodland path onto the brick patio, you know at once that you are entering a new space. Whether your transitions are as subtle as the narrowing of a passage or as clear as a gate or arbor, emphasizing passageways is a creative way to highlight the changing moods and experiences in your garden.