Cottage Garden with a Twist

Casual plantings and water features contribute to a setting that feels natural, lush, and relaxing

When I bought my house, it had a prosaic yard but no garden. The front was graced by a mature spruce on the north side, and a 20-foot-deep swath of level lawn ended in a steep slope to the street, making mowing difficult. I was lucky that my backyard was screened from close neighbors by surrounding mature hedges of arborvitae along one side and yew on the other. The sweeping limbs of a spruce offered a zone of mystery at the rear.

The simple clapboard house cried out for the casual, fragrant plantings of a cottage garden. With this design scheme in mind, I gradually transformed my modest lot until my entire site was filled with a profusion of colorful plantings and water features.

I decided to organize my front-yard plantings around stonework and a water feature. I made a pond in the front yard, and I left a small gravel path to encircle it. Then I terraced the slope with scrounged stones. This terracing also served as a structural element to balance the rambling plantings. Finally, I thickly planted the pond surround, terrace, and foundation of the porch in a cottage-garden style so I could enjoy constant color, starting with spring bulbs and ending with the autumn golds of ornamental grasses. 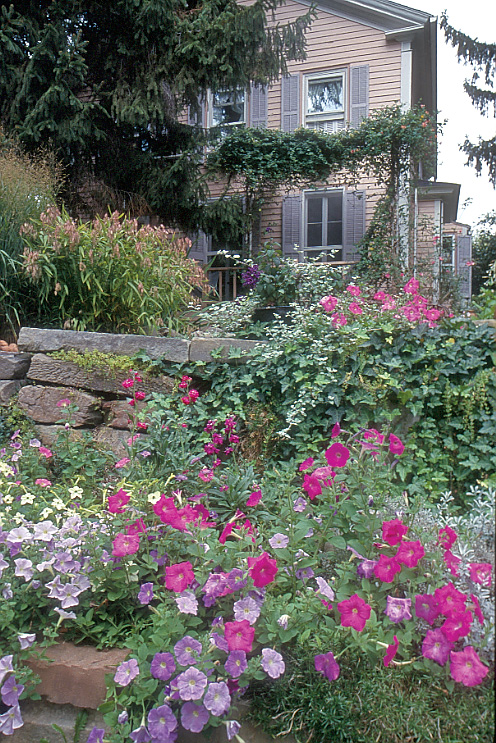 A garden house serves as a focal point

I felt the rear garden needed a pond as well, so I created not one but two more in the backyard. But even before I added them, I knew I needed focal points that would draw the eye through the still-imaginary billowing vegetation.

On one side, I built a trellis for sweet autumn clematis (Clematis paniculata, Zones 5–11), which would eventually tie into the nearby spruce and offer a sheltered area next to the lower pond. On the opposite side of the backyard, my nephew built a garden house with a deck overhanging the upper pond. I wanted this structure to look as if it had always been there, in keeping with the casual plantings. To achieve this effect, it was set at an angle and nestled among venerable lilacs. We salvaged old windows and lumber for siding, so when the 8-foot-wide by 10-foot-long building was finished, it had the fairy-tale look of a structure having sprouted from the ground. By the time my cuttings of fragrant old roses had matured to circle the door, the back ponds were repeating the natural delights of the front pond, complete with waterlilies, fish, toads, frogs, dragonflies, and even mallards, coming to check out nesting possibilities. Occasion­ally, a great blue heron appears, hunting for prey.

The relaxed plantings provide a haven for wildlife. There seems to be enough for everyone: chipmunks running under rocks, squirrels nibbling spruce cones like corncobs, rabbits nesting under the garden house. The garden has become an aviary with birds singing, nesting, and darting through the shrubs and tearing away seeds from the sunflowers even before they are ripe. Summer evenings take on another atmosphere when fireflies leave the foliage to dot the garden with tiny lights.

Edit to keep things in check

It may sound like all this took place without much effort. In fact, I spent much time editing: ruthlessly pulling out, pruning, cutting back, and transplanting. And, of course, improving the soil is essential to encouraging lavish growth. Having access to well-rotted horse manure, I dressed my beds with it in spring and fall. I also made the paths to the ponds by adding a 4-inch-deep layer of pea gravel on top of a 4-inch-deep layer of sand to hold the gravel in place. Gravel is a wonderful medium for plants as it provides a protective cover against cold or heat and holds in moisture during our August droughts. In spring, these paths are rivers of blue forget-me-nots, which are easily removed when the flowers are spent but which self-sow the following year. In my abundantly self-seeding garden, volunteers often choose what might seem to be inappropriate places. One summer, a sunflower grew into an old twig chair, offering a parasol hat to those choosing this unique seat.

I recently moved from this house to an even smaller cottage down the street. Although it was difficult to leave a garden I had cultivated for more than two decades, I carried with me years of lessons and the joys of tending that small bit of the planet. Now I’m excited to pour some of this knowledge into the creation of another free-spirited cottage garden. Perhaps next year there will be a new chorus of toads.

Valerie Strong is a garden designer based in Hudson, Ohio.