A Bold Border of Trees and Shrubs

When I began working with one of my landscape clients, in 1988, he had been building his collection of trees and shrubs for many years. They had been assembled with little rhyme or reason, so he asked me to give the collection a sense of composition. Of all the trees my client had amassed, he valued his Japanese maples the most, so these became the basis for my design. To show off the maples’ exquisite palette of color, form, and texture, I created a large crescent-shaped border behind his house to serve as a “gallery.” But rather than just lining them up in rows to be viewed as individual plants, I wanted the maples to be part of a pleasing ensemble with some of the other plants in the collection. The overall size of the crescent border and the interior lawn it surrounds is about a half acre, with the inside line of the border measuring 300 feet (see site plan).

A crescent-shaped border turns a collection into an ensemble. This space serves as an outdoor gallery to showcase exceptional trees and shrubs.

Of the existing plantings, I planned to retain only three crabapples: a pair of weeping crabs (Malus ‘Echtermeyer’) that would flank the entry into the garden and an upright crab (M. floribunda) that would serve as a spring focal point in one of the beds.

My client and I first chose and placed 12 maples from his collection to anchor this border. When I began, the maples ranged from 8 inches to 6 feet tall. I took care to place them so they would have room to grow to maturity and not be overshadowed by a neighbor. In addition, I positioned each one so that its overall character and outstanding attributes, such as the color and texture of the foliage, would be seen in the best light. Since the border was entirely in full sun, this gave me many options for placement. I knew that soft easterly morning light would enhance the delicacy of a filigree-textured maple (Acer palmatum ‘Atrolineare’), so I put it in the eastern part of the crescent. On the other hand, it takes stronger afternoon light to reveal the veining and color of the dark-burgundy-leaved maples (such as Acer palmatum ‘Trompenburg’), so I planted those in the border’s western section. 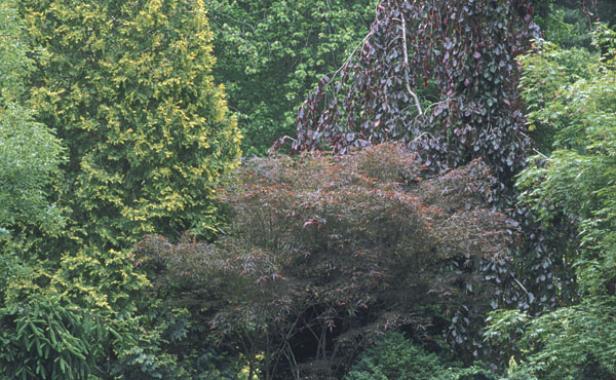 Massive trees and shrubs make a magnificent statement. After 14 years, some plants in this border now stand as tall as 20 feet, providing a sense of enclosure. (B on site plan)

After I situated the Japanese maples in the border, I started thinking about supporting plants. To emphasize the seasonal changes of the deciduous maples, I looked to evergreens to provide a steady presence yearround and to act as a backdrop for the maples’ foliage as well as for their bare branches in winter. I envisioned large, broad evergreens as backdrops and narrow, vertical evergreens to contrast with the maples’ rounded canopies.

As I considered evergreens, I drew on my experience growing many trees and shrubs, consulted woody-plant references, and talked with other gardeners. I thought about how the habits of potential partners would mature in 5, 10, even 20 years. I also paid attention to attributes such as the color and texture of foliage and bark.

The first supporting plants I selected were a number of gold threadleaf false cypresses (Chamaecyparis pisifera ‘Filifera Aurea’). I placed them in groups and as individual plants throughout the bed. Initially they were only a foot tall and wide and were planted on 8-foot centers. Fourteen years later, they are 10 to 12 feet tall and up to 8 feet wide. The repetition of their gold color, fine texture, and pyramidal form provides continuity and rhythm throughout the crescent garden. Watching them grow over the years, I’ve liked the way these gold false cypresses interact with the maples. The intense color of their summer growth against the burgundy maple foliage reminds me of the richness of gold jewelry worn on red silk. By providing contrast, their evergreen foliage also supports the exposed dormant forms of the Japanese maples in winter. When the sun breaks on dismal February days, the false cypresses really stand out.

Other plants fill in gaps and round out the picture

The Japanese maples and false cypresses set the tone and provided the backbone of this border, but it needed other elements to bring it to life. I introduced another supporting plant, gold arborvitae (Thuja occidentalis ‘Watnong Gold’), at the midpoint of the crescent garden to add another dimension and to bridge the gap between the two weeping crabapples. The arborvitae’s gold color repeated that of the golden false cypresses but with a variation in intensity. I was a little apprehensive about placing the gold arborvitaes between the crabapples because the crabs’ blooms are a shade of pink, but there was enough purple in the flowers to serve as a sound color complement to the gold.

To add some extra zest in spring and summer, I planted a few bulbs, annuals, and perennials in parts of the border that had yet to fill in. A cluster of white cleome (Cleome hassleriana ‘Helen Campbell’) beside the weeping crabapple is pretty for now, but to create long-lived flowery detail in this area of the border, I’m training a single pink gallica rose (Rosa gallica ‘Complicata’) to weave through a weeping crabapple. The mid-June blooms of ‘Complicata’ are reminiscent of the earlier purplepink crabapple blossoms. The rose’s blooms also fill in the gap in early summer before the crab’s fruit begins deepening to purple in midsummer. This play of cyclic change is one of the things I relish about creating a woody border. Planning and planting a large woody border has been a great way for this client to put his collection to work and to celebrate the year-round beauty of his remarkable trees and shrubs.

Chen Choo is a retired nuclear engineer with an artist’s eye and a passion for collecting plants. His garden in southern Ontario is filled with a fascinating mix of cold-hardy…