Most of my knowledge of Bonsai trees has been garnered from the wise words of Mr Miyagi in that great 1984 classic, The Karate Kid. Ralph Maccio and Pat Morita at their charismatic best and who can forget the cavernous dimple in the chin of Martin Kove (sensei of the Cobra Kai) or the floppy forelock of blonde baddie Johnny (William Zabka)?

This may not be the soundest source of horticultural knowledge but it was a start. This was then augmented a couple of years ago when I interviewed a chap from Yorkshire who had a phenomenal collection of bonsai trees. If I am to be honest – and, now we know each other better oh honoured readers of Fine Gardening I feel that we can be completely candid with each other – I thought that the art of bonsai was just another word for tree torture. Instead of growing tall and true in the forest they were subjected to the evil whim of the bonsai master. 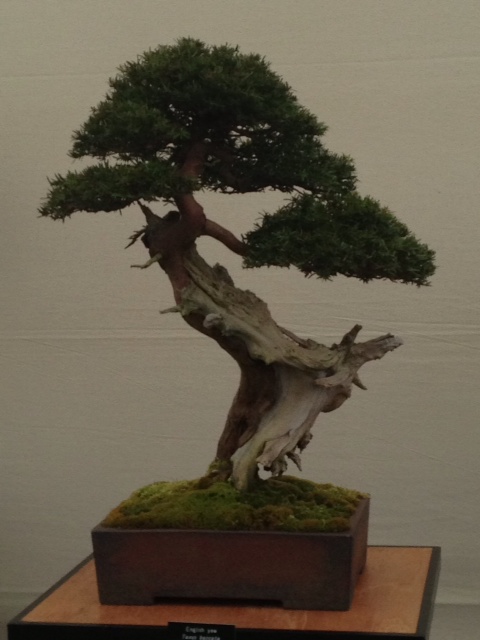 I was very wrong, it is much cleverer than just hacking away at a tree. The basic premise is to reduce the size of the tree while still maintaining the shape of the mature specimen. I always thought that you did this by training and educating a young tree for many, many years. Actually it is simpler to dig up a larger tree and slowly reduce its size and sculpt its branches until it’s roots fit into a shallow dish. The results come slightly quicker.

The most remarkable story I heard (although I am sure there are many others) was of a Chinese juniper five foot tall and twelve feet wide growing in too small a patch of an overcrowded garden. Over a period of years it was dug up, pruned and replanted until it fitted into a pot the size of a lunchbox. The whole process took about a quarter of a century and is far from over.

The art began about four thousand years ago in China (where it was known as Penjing). Originally it was much more exotic: tree shapes were based on coiled serpents and raging dragons. The Japanese took it further: beginning as something spiritual confined to temples by the eighteenth century it had become more widespread. Today there are thousands of enthusiasts all over the world looking after majestic specimens some of which are worth many thousands of dollars.

Any tree can become a bonsai – except palm trees because they have no branches. It is not a complicated hobby: mysticism, strange tools and exotic outfits are purely optional. Just remember that you are dealing with miniature trees not houseplants: like trees they need cold winters, air, water and sunshine to thrive.

Most areas will have a Bonsai club stuffed full of enthusiasts eager to share their knowledge, try the American Bonsai Society for details.

However, if you are an impatient gardener, don’t bother.