How to Keep Your Harvest Fresh

It was my first garden. All season I worked and worried that just as the familiar pot wouldn’t boil, my garden wouldn’t produce. But there they were, my first ripe tomatoes. They were smooth and firm, fitting perfectly in my soil-roughened hands. Cradling them affectionately, I whisked them to the kitchen and placed them—well, all but one—gently into the back of the refrigerator. I thought they would be safe there until the weekend when I could share them at a family gathering. But at the picnic when I proudly carved the soft, drippy spheres into small pieces and passed them around, no one was impressed. Baffled, I took a bite myself—they were mealy! What had I done?

Years later, I can laugh at the injury I caused my precious tomatoes during that first season. Post-harvest damage accounts for up to 50% of vegetable losses worldwide, and I suspect this figure isn’t much different in most homes. But damage to fresh-picked produce is easy to avoid. Understanding the ins and outs of caring for vegetables once they leave the garden can spare you much heartache and even keep a bit of your garden alive well into the dark winter months.

Vegetables in the kitchen are as alive as they were in the garden, but they need a different kind of care. The hot sun and a good soaking with the hose no longer have any appeal, but the basics still apply—the temperature, water, and air around them affect their appearance and health.

To Chill or Not to Chill

To live, vegetables must make energy, even after they have been harvested. They constantly break down the carbohydrates, proteins, and fats they created with the help of the sun into simpler materials. Without roots, leaves, and soil, vegetables can’t replenish these substances as they could in the garden. Through a pro-cess called respiration, these materials break down faster and faster as air temperature rises. Once the carbohydrates, proteins, and fats are gone, vegetables die. So, the lower the temperature, the longer vegetables’ food reserves last, and the longer they stay in good shape. 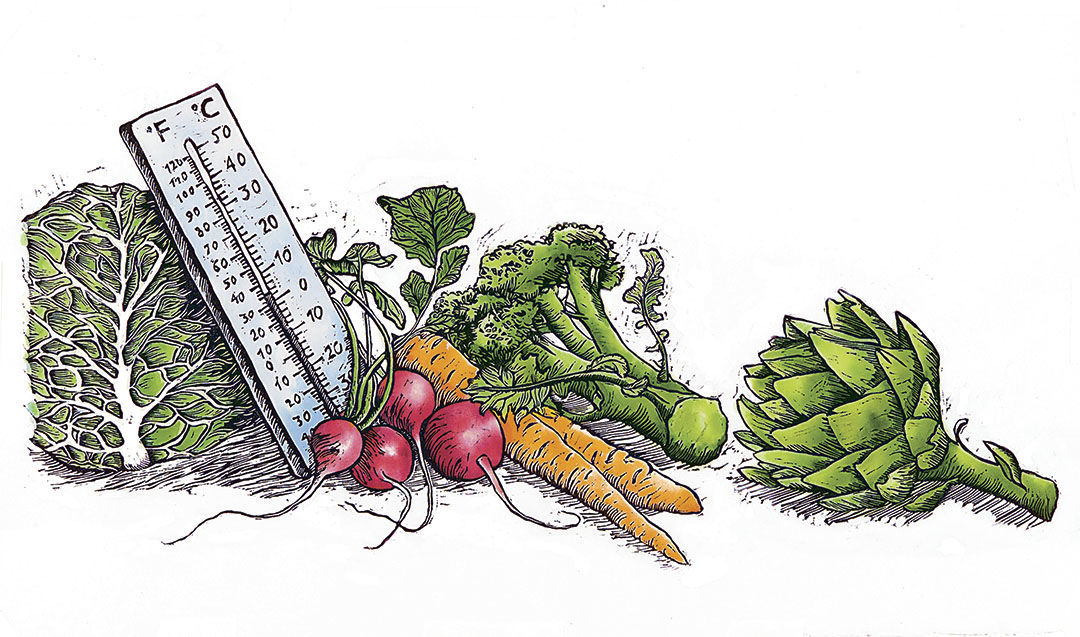 Chilling injury is a complex syndrome. The vegetable variety, length of exposure to chilling temperatures, length of exposure to warm temperatures after the chilling ones, and the growing conditions experienced in the garden all affect the extent of chilling injury. For example, some okra may be delicious coming from the fridge after two days, but by the end of the week will develop disgusting, wet sores. A pepper may shine straight from the fridge after two weeks, but leave it out on the counter for a few days and it will look like it’s been pelted with miniature rot-causing meteors. Or a pepper left in the refrigerator for four weeks may pit without ever leaving the cold. Some unripe fruits that normally would ripen indoors, like sufficiently mature green tomatoes, may never ripen after being exposed to chilling temperatures for a few days. My first tomatoes turned mealy because of chilling injury.

Maintaining cool temperatures in a modern house is no easy feat, even in the basement. If your basement stays 60˚F or below, you’re very lucky. You have an exceptional place to hold lots of things. Unfortunately, most heated basements these days are a dry 70˚F, unsuitable for vegetable storage. Home refrigerators generally run between 35˚F and 40˚F, but since this varies greatly, it would be wise to use a small thermometer to check.

Vegetables, just like all living creatures on earth, are made mostly of water. We know this from watching parched spinach wilt under the sun on a dry June afternoon. You should harvest vegetables early in the day, after the glistening morning dew drops have disappeared, but before the sun reaches its highest, hottest point. If you harvest that spinach limp, it never will recover.

Vegetables lose their turgidity, or state of being swollen with water, and wilt in the kitchen just as they do in that dry June garden. From the moment vegetables are harvested, they are cut off from their water source—their roots and the soil—and they lose water until they die. The evaporation of water vapor from the vegetable, a process called transpiration, is simple: water wants to move from an area of greater concentration to an area of lesser concentration. Since water is more concentrated in a vegetable than in the air, vegetables lose water. Transpiration also depends on the temperature and the amount of air movement. Normally, when a vegetable’s water evaporates, a moist water vapor barrier forms around it, making less water want to evaporate. When there’s a lot of air movement, the vapor barrier can’t form, and water escapes from the vegetable like a barefoot gardener from a nettle patch.

You can control transpirational water loss by keeping an eye on the humidity, temperature, and amount of air movement. Wilted and shriveled beets left in a dry fridge are a sorry sight. To keep them from withering away, increase humidity and reduce the temperature. Put harvested beets in a plastic bag or container. This raises the humidity, reduces air movement, and artificially strengthens the vegetables’ vapor barrier. Your refrigerator’s crisping drawer, basically a plastic box inside the fridge, attempts to decrease transpiration, but often fails because it is not well sealed. Place the contained beets in the fridge, and enjoy beautiful beets for months. To further increase your refrigerator’s humidity, you can spritz the inside with a misting bottle.

This storage method also works well for broccoli, carrots, kale, parsnips, turnips, radishes, and most other refrigerator-tolerant vegetables. But be sure to remove any non-edible vegetable parts like carrot tops. These extra leaves just extend the evaporative surface, making vegetables wilt more.

Leafy greens like lettuces are particularly vulnerable to moisture loss and wilting. Wrap them loosely with damp paper toweling and store them in a plastic bag to maintain humidity.

While most vegetables enjoy a relative humidity between 85% and 90%, others are ruined by moisture. High humidity forces onions and garlic to sprout, and makes winter squash and pumpkins rot. These crops like it somewhat drier; the normal humidity in a typical house is fine. Onions, garlic, shallots, winter squash, and pumpkins should be kept in a dark, cool room or cupboard.

Be wary of standing water for it is the perfect travel guide and locksmith for disease. Droplets carry bacteria and fungal spores from place to place and help them plant their feet, so to speak, in pores and wounds in a vegetable’s skin. One droplet of water on a zucchini can lead to bacterial and fungal pits, oozes, and mush. So if you wash soil from your veggies before storage, make sure to dry them thoroughly. In general, it’s better not to wash vegetables before storage. Instead, gently brush off soil after harvest and wash them as you eat them.

Wounding also equals disaster in vegetable care. Any injury is dangerous, be it a slight bruise from dropping a pepper or a surface scratch from a jagged edge in your harvesting basket. Wounded spots turn brown and welcome fungal infection, causing the injured vegetable to lose water faster than normal. Wounded tissues also generate ethylene gas, which may cause some vegetables to ripen and perish too soon. All in all, it’s best to eat damaged vegetables quickly. And be careful not to keep them with perfect vegetables; if you discover any damaged ones after they’ve been stored, remove them. 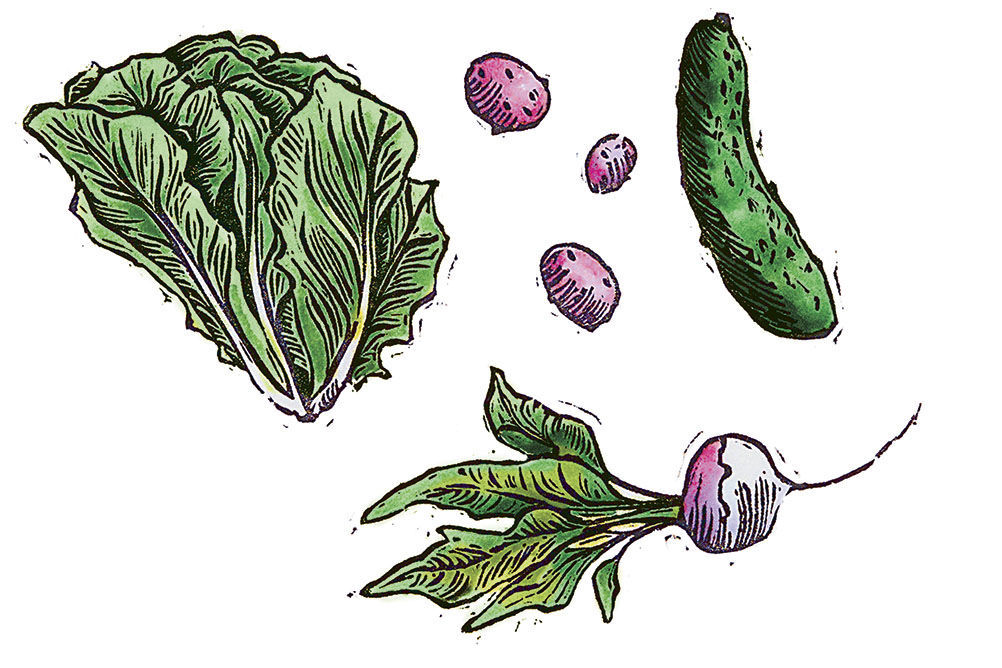 According to legend, long ago in eastern countries, fruits were taken into incense-filled temples to hasten ripening. We now know that the burning incense created ethylene gas, which ripened the fruits quickly and evenly. We have all heard about putting unripe tomatoes in a paper bag on a kitchen counter to quickly turn them as red as a parade of fire engines. This works because the bag traps the
ethylene gas created naturally by the tomatoes. To ripen a tomato really fast, you can add to the paper bag an apple, banana, or cantaloupe, all of which give off lots of ethylene.

My grandmother used to pick all her green tomatoes at dusk the evening of the first predicted frost. She brought them into her basement, carefully piled into plastic grocery bags, and laid them out on a big wooden table. She left each one cradled with a cushion of free-moving air to prevent ethylene buildup. She noticed that the tomatoes lost more water this way, but these fruits ripened slowly, one by one, for months. The immature tomatoes never ripened, and some of them rotted, but since she could see and remove the bad ones, the rest stayed in good shape, providing her with a steady supply.

If you plan on storing vegetables for a while, ethylene may become an enemy instead of a friend. Since ethylene build-up hastens the ripening of fruit-type vegetables, it also makes them quick to perish. Celery, cabbage, carrots, potatoes, onions, and leafy greens can be harmed by ethylene, too. If you plan to keep apples or cantaloupe in the fridge, seal them loosely in a separate bag or drawer to prevent harming your other produce. Keep a close eye on them, though, because sealed up, these fruits will ripen and expire more quickly.

Keep ’em in the Dark

Once harvested vegetables come indoors, light raises their temperature, causing increased respiration and moisture loss. So it’s wise to keep all stored vegetables in the dark. This is especially true for Belgian endive and potatoes. When exposed to light, they turn green from producing chlorophyll. As a result, Belgian endive becomes bitter, and potatoes create solanine, a chemical toxic to humans. Keep potatoes in a dark closet or basement, or cover them with a thick cloth. Store Belgian endive in the refrigerator.

When you bring fresh vegetables into your house, remember they are living beings at your mercy. You have the power to keep them in tip-top, garden-fresh shape or dash them into chill-injured, wilted, over-ripened, sprouting, rotted blobs. With an understanding of the basics, a little space, and a little time, your tomatoes will never disappoint you again.