Integrating a Pool Into a Landscape

Visual cues and a sense of enclosure make this space inviting

As a landscape designer, I often get harried phone calls from potential clients who describe the horrors of a project already underway. This was certainly the case with Candace and David Beaulieu’s swimming pool. The project started out simply enough. They had contracted to have a pool and hot tub built on a sloping wooded lot; however, once the woodland was cleared and bulldozed to create a level terrace, the homeowners began to panic. The pool was much higher on the hill than they had anticipated and figured prominently in the view from the main living areas along the back of the house. A once serene expanse of trees was now a big, bare hole in the ground.

I had to agree that the project had some serious challenges. The most pressing issue was how to hold back the hill below the pool’s terrace. Approaching from the side yard, a visitor would have to climb a sudden 8-foot change in grade to reach the pool. The contractor assured the homeowners that a “small” wall and a few shrubs would take care of the steep slope, but we were not convinced. For safety’s sake, the pool had to be enclosed, but it wasn’t clear where the fence should go. And most important from the clients’ point of view was the need to make the pool nestle into its setting. Also, the Beaulieus’ plans for a sunroom overlooking the pool seemed a less attractive option, given the jarring qualities of their changed views. 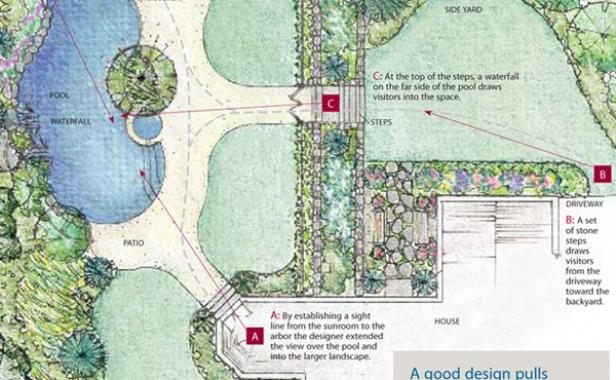 The questions I began asking had the Beaulieus perplexed at first. What outside areas do you visit regularly? From which approach would guests arrive for a poolside barbecue? Through the house? From the side yard? Where should the pool’s filtration and heating systems be placed? Do you need storage for pool chemicals and such?

Clients often are concerned primarily with a landscape’s aesthetic properties, but as a designer, I also think about making the site function properly. One way I try to achieve this goal is to establish strong sight lines to the focal points and “destinations” that provide the garden’s structure. I always begin by analyzing a site’s opportunities. It may not be necessary to create new focal points and destinations but rather to simply emphasize existing ones. In this case, the Beaulieus mentioned that there was an existing path beyond the pool, which led to a general store a short walk away. We decided to make this path a destination.

To make the pool settle into the landscape, my first suggestion was to align the traffic patterns with focal points in the landscape. It made sense to take advantage of the existing path through the woods, so we decided to align the view from the proposed sunroom with an element indicating passage on the other side of the pool. I designed that element as a white arching arbor. It provides an eyecatching
destination and also functions as a screen to the pool’s filtration and heating equipment. By having a focal point beyond the pool, views extend over it, and the pool becomes part of the larger landscape.

Another major challenge was how to attract visitors up the slope at the side yard. We decided to build terraced retaining walls and a fairly wide staircase, which we aligned with a planned circulating waterfall on the opposite, uphill side of the pool. As with the arbor, this staircase signals a traffic pattern and serves as a destination and an organizing element within the design.

As for the larger landscape, the woodland edge left behind by the clearing and bulldozing was unattractive. A thinned-out understory exposed the site to views and noise from the road beyond. This stark sight line would be especially evident from the planned sunroom looking toward the woodland path. Our design solution was to place a storage shed against this woodland edge. This useful structure was appealing to look at from the sunroom and provided a strong architectural background for the pool area.

Plantings link the new features with the old

Elsewhere, the homeowners and I decided to incorporate naturalistic, woodland elements to reconnect the introduced landscape with its surroundings. The waterfall’s denuded hillside was replanted with many native woodland trees, shrubs, and ground covers. The simple black chain-link fence chosen for this perimeter will soon be obscured by these dense, shade-loving plantings. And, although the clients’ son lobbied for a diving board, a flat diving rock, similar to those used in the waterfall, was chosen instead. The patio table and chairs, chaises longues, and gas grill are kept in the periphery of the major sight lines to avoid cluttering the views and to give them enough space outside the circulation patterns.

Finally, a planting bed was created next to the hot tub to soften the expanse of pebbly concrete pool surround and to provide some shade to that area. The Beaulieus now have a landscape scene that’s just as pleasing from inside the house as it is from outside.