Showcase your garden investment with these simple tips

The first trees appeared on earth about 400 million years ago, and they did just fine for many millennia before humans arrived on the scene. So before we get all hot under the collar about the right and wrong way to prune a Japanese maple, let’s get one thing straight: Trees don’t need us to prune them. Pruning only becomes “necessary” when a tree won’t do what we want it to do on its own.

Why prune in the first place?

There are two basic reasons to prune: health and looks. Pruning to keep a tree healthy is pretty formulaic. If you remove dead, diseased, and damaged material (“the three Ds”), you will be off to a good start. Take out crossing branches to prevent bark damage that invites pests and pathogens, and that’s about it. Yes, trees survived just fine without us, but a little helping hand here and there can extend their productive lives quite a bit.

For most gardeners, pruning for looks is the tough and intimidating part. To do it well, you pretty much have to lay it all out there for the whole judgmental world to see. Your talents, your judgments, and your decisions are all there, covered by no more than the emperor’s new clothes. It can be a little unnerving.

Successful pruning for aesthetics requires that you start with a good working knowledge of how the tree grows, how it branches, and what form or character its default setting is. Trying to train a columnar tree to drape over a rock wall is a bit like trying to get James Taylor to sing AC/DC—it is not going to turn out well.

Although Acer palmatum certainly gets top billing as the most “Japanese” of the Japanese maples in this country, there are actually several species that fall under the description. These are all wonderful trees in their own right, and fortunately for our purposes, most of them fit a fairly consistent description: They are small to medium-size, multitrunked trees with broad spreading canopies, opposite leaf arrangement, and layered branching. This means that we can pretty much treat them all the same when it comes to pruning.

A few basic rules will serve you well

What most people are looking for in their pruned Japanese maple is more character—the kind that usually develops on its own when the tree is given enough time and we exercise enough patience.

The best first step in aging and adding character to your tree through pruning is to clean out the center. All those fussy little branches that gum up the interior of the tree likely don’t even contribute much to the plant’s overall photosynthetic productivity. You will be amazed at what an impact you can make with just a few minutes of cleaning out the crown of the tree. See types of pruning cuts.

Like much in the pruning calendar, it’s usually easier to do this work in winter when leaves aren’t in your way, but you can do clean-out pruning in late spring or early summer as well. Just avoid pruning in the late summer to early fall, which can encourage new growth that may not harden off in time for winter.

After all that, any further pruning simply comes down to what you’re looking to create. If you want a more open canopy, thin a little more. If you need a tighter outline for a more formal setting, clean up the stray stragglers around the canopy edge. Are you looking to create a specimen with a windswept look? Take a little more off the top of one side and a little less off the bottom of the other. See common pruning pitfalls.

The secret to pruning a Japanese maple is that there really is no secret at all. Beauty is in the eye of the beholder. Once you cover a few basics, it’s all up to you.

Watch a video on how to prune japanese maples

This species is the most widely grown, with more than 1,000 named varieties.

Most cultivars have small, starshaped foliage and a narrow, upright habit.

Like A. japonicum, the cultivars of this species often have rounded leaves with shallow lobes.

With rounded leaves, this tree is sometimes called a full moon maple.

As with any tree or shrub, understanding how the plant grows will help you decide when and how to prune. In the case of Japanese maples, some cuts are better than others.

Thinning cuts are the go-to solution

Thinning cuts are quite straightforward. Simply remove each branch at its point of origin while leaving the branch collar, the slightly swollen ring around the base of the branch. This is the best approach to use when clearing out the center of a tree to give it more character.

Japanese maples have opposite leaves and buds positioned in pairs along the stem rather than alternating from one side to another. “Heading back” a branch—shortening it without removing it at its point of origin—should generally be avoided. This kind of cut will induce the remaining two buds to break and grow, which almost never results in a good-looking tree. If you rub off one of the buds, leaving only one to break and grow, the result will certainly be better, but still not great.

Perhaps the easiest way to define your personal pruning goals is to visualize what you do not want to do. Have you spotted any of these unfortunate shapes in your neighbors’ yards lately?

You see this most commonly with the dwarf, cutleaf forms. Lopping off all branches a foot above the ground might qualify as dramatic, but unless your goal is to create what looks like an inverted cereal bowl on a stick, I do not recommend it. 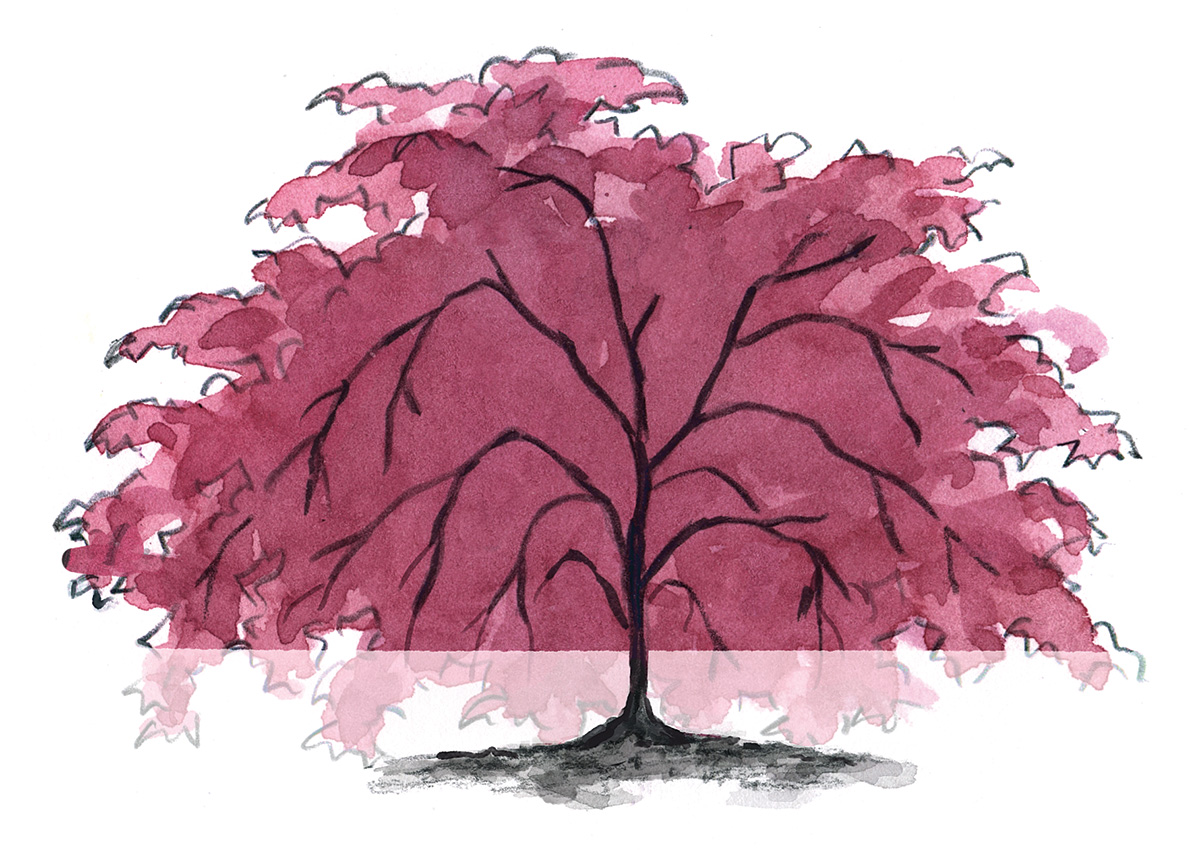 Another approach seen around town is the Japanese maple sheared into a cue ball on a post or, if not done with an eye toward symmetry, an oversize turkey leg. Unfortunately, having a new set of gas-powered hedge shears seems to inspire some folks to clip everything in their yard into perfect (or not so perfect) geometric shapes. 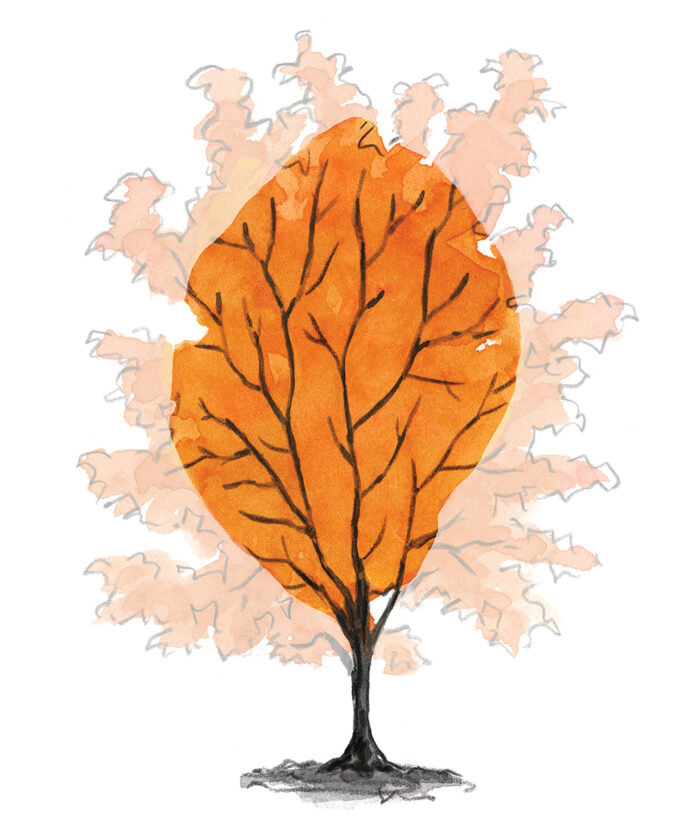 I once had a neighbor who carried a set of pricey loppers on the back of his mower. Whenever he had to duck (or, in fact, failed to duck) under a branch, he’d stop the mower, grab the loppers, and unceremoniously whack off a branch just above where he had bumped his noggin. This was not a great system for creating a cool, dramatic, or artistic tree shape. 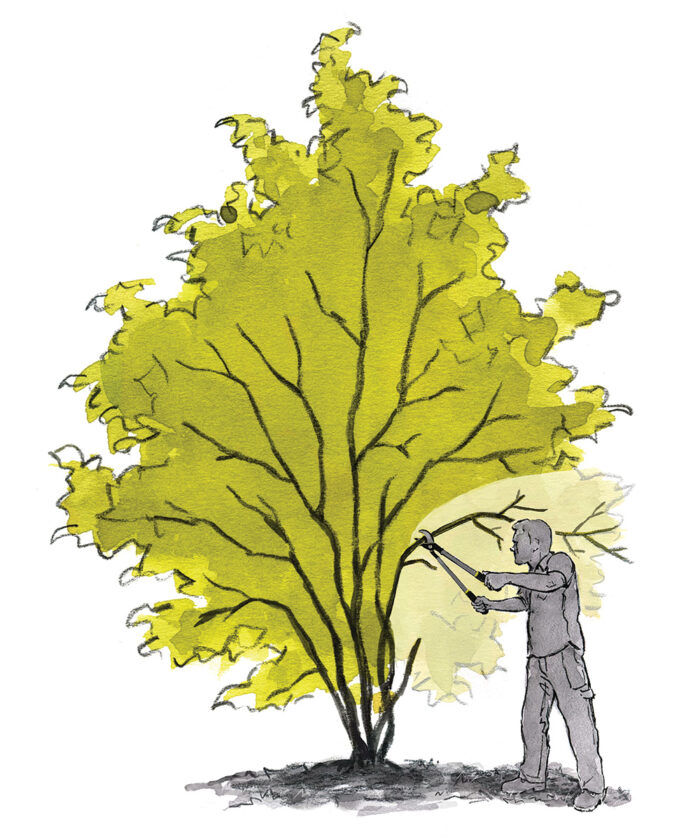 Photos, except where noted: courtesy of Yew Dell Botanical Gardens

My name is Lyle Johnson. I have been gardening on a 60-foot by 180-foot city lot in Galesburg, Illinois, for a little more than 30 years. Over that time the…