A Tale of Two Side Yards

Here’s how one homeowner tackled the challenges of long, narrow spaces

I like to wander around my small urban garden in Seattle as often as I can. Along the way, I look at the smallest of details and the big picture as well. Whether I start in the front or the back, I always go in a loop and return to where I began. This means I invariably pass through my two side yards.

Side yards are those tricky areas between a house and its property line. For many of us, these spaces are narrow and therefore challenging to landscape. Homeowners often are tempted to use side yards merely as passageways or, at worst, an area to avoid altogether, where trash and recycling receptacles are stored or compost is piled in great heaps. One of my side yards has been all of these things at one time or another, including a dog run for several years. I’ve all but forgotten those days.

Since the front of our house faces west, the side yard on the north is mostly shaded, while the other side enjoys a sunnier southern exposure. Both spaces are only about 12 feet wide, but otherwise they couldn’t be more different. To make each yard feel like a distinctive space, I varied the plantings and the materials used for paths, gates, and fencing. Even though my side yards are very small, I’ve used sizable trees and shrubs (12 to 30 feet tall) placed close to the property line, because I think they make the space feel larger. I also like to mix trees with high crowns and shrubs with open habits to create dynamic plant relationships within the canopy as well as at the lower levels. By judiciously layering the foliage of trees, shrubs, and herbaceous perennials, I’ve been able to make each space feel rich but not cramped.

I avoided using excessive hedging in my side yards, since straight lines of shrubs can get boring pretty easily. I do have some hedged areas, but trees and shrubs with a variety of foliage, texture, shape, and color provide much more interest. Well-chosen, compatible plantings placed close together can offer privacy without that hedged-in feeling.

Over time, my side yards have become garden spaces with their own special qualities. These areas complete my garden and make my frequent strolls all the more pleasant and rewarding.

The North Side: An Asian gate bisects two shady spaces

This yard is mostly shaded except for morning and late-afternoon sun. Since the neighboring house is a comfortable distance from our property line, I installed a solid Japanese-style cedar fence to separate the properties. Both black and green bamboo grow against the fence, rising up to 20 feet and providing privacy and beauty. I keep this stand of bamboo as open as possible so that the fence can be seen and my neighbor can get enough light in his yard to grow vegetables.

Toward the back of this space, I planted three trees in a line: an Austrian pine (Pinus nigra, Zones 5–8), a Japanese clethra (Clethra barbinervis, Zones 6–8), and a coral bark Japanese maple (Acer palmatum ‘Sango-kaku’, Zones 6–8). As they arch toward the sun, they provide skyline interest.

Below all of these are peren­­nials. Several clumps of Japanese forest grass (Ha­kone­chloa macra ‘Aureola’, Zones 5–9) cascade freely onto a fired-brick pathway that winds its way to a tall and substantial gate that I designed. Roofed like the fence, it has a peek-a-boo bamboo window. There, the brick path ends, as does the fence.

The gate is perhaps the most important feature in this side yard. It makes a dramatic focal point and lends an element of mystery. When it’s viewed from either direction, the surprising and stunning contrast between the two sections is a source of delight.

Beyond the gate, in the front portion of this side yard, the meandering path is made of circular Japanese millstones sunk into the earth. Here, the fence is replaced by an 8-foot hedge of Portugal laurel (Prunus lusitanica, Zones 7–9). Also in this space, a golden full-moon Japanese maple (Acer japonicum ‘Aureum’, Zones 5–7) rises above plantings scattered along the path. In the darkest corner of this yard, a variegated elderberry (Sambucus nigra ‘Aureomarginata’, Zones 6–8) scales the height of the house and requires almost no water or sunlight to provide a much-needed screen for unsightly utility boxes and cables. At the end of the path there’s a good-size southern magnolia (Magnolia grandiflora, Zones 7–9) and a stairway leading to a rooftop deck over the garage. 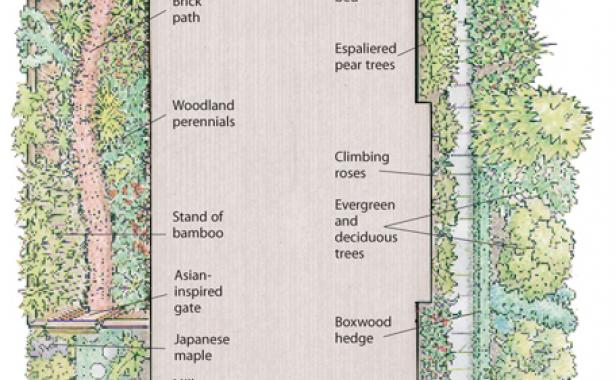 The South Side: A sunnier site means more flowers

The neighboring house to the south runs only about half the length of this side yard, but in some places it is a mere 2 feet from our property line, which makes for shadier conditions toward the front of the space. Privacy was a concern, but since it seemed inappropriate to install a solid fence so close to a neighboring house, I instead chose a short, open wood fence.

Next to the fence I planted a mix of evergreen and deciduous trees. As they started to reach a good height, they gave the small space more dimension. I planted deciduous Exbury azaleas (Rhodo­dendron cvs., Zones 5–8) among the trees and a low hedge of Japanese boxwood (Buxus microphylla var. japonica, Zones 6–9) along the existing linear concrete walkway.

Between our house and the walkway there is a narrow planting area—less than a foot wide in some places and up to 3 feet in others. With this spot’s mostly sunny outlook, I knew it would be ideal for growing colorful climbers. Early on, I had planted two pear trees against the house and trained them as espaliers. In addition to producing fruit, they act as trellises through which a clematis (Clematis montana var. rubens ‘Marjorie’, Zones 6–9) and several shrub and climbing roses grow. Among these are ‘Lyda Rose’, ‘Sally Holmes’, and ‘Westerland’ (Zones 5–9), all of which are ever-blooming and shade-tolerant.

Beyond where the neighbor’s house ends, there’s unobstructed sun against the south side of our house. In a brick-edged raised bed beneath the kitchen windows, I planted an almost-evergreen honeysuckle (Lonicera fragrantissima, Zones 5–8). In August, a scarlet clematis (Clematis texensis ‘Gravetye Beauty’, Zones 5–9) grows into the honeysuckle, which is surrounded by two very tall specimens of Rosa ‘Altissimo’ (Zones 5–9) and a climbing R. ‘Joseph’s Coat’ (Zones 6–9). Beneath the climbers, I planted perennials with a yellow and red scheme. The overall effect is one of multiple levels of successive color against a green backdrop.