When they bloom determines when to prune

When confronted with a tangle of spindly clematis vines to prune, many gardeners get no further than scratching their heads and wondering where to begin. The confusion is most likely caused by the specific pruning needs of the many species and varieties. Some clematis vines like to be cut to the ground each year. Others just need a simple shearing to keep them looking good. But how do you know what kind of pruning a clematis needs? The key to success is figuring out which of the three pruning groups your clematis belongs to. By identifying the group and following the instructions, the task will seem much less daunting.

Below you’ll find pruning instructions for each group, along with a few representative varieties. See What group is my clematis? for many more varieties listed by group. If you are still not sure what type of clematis you have or which group it belongs to, let the plant grow freely for a year or two and watch how it flowers. You will then be able to assign it to a group.

If left unpruned, clematis vines become overloaded with decrepit stems that produce few flowers. By the same token, more vigorous species and varieties that are left unchecked bear most of the flowers high atop the plants and run the risk of tearing down their supporting structure or pulling themselves down under their own weight. Pruning clematis vines stimulates new growth, which increases the number of flowers, encourages flowers at a level where you can best enjoy them, and takes weight off the plant to keep it from toppling over.

Pruning also helps to keep clematis vines healthy. Clematis wilt, or fungal stem rot, occasionally strikes this plant, causing shoots, leaves, or sometimes whole vines to collapse and brown, usually in early summer. Pruning back wilted shoots to healthy growth, or, if needed, pruning the whole plant almost to ground level prevents the disease from spreading and stimulates new stem growth from the remaining healthy tissue. Also, pruning the dense tangle of stems opens the remaining shoots to air and light and reduces the number of leaves that can hold moisture, which encourages wilt and other diseases. 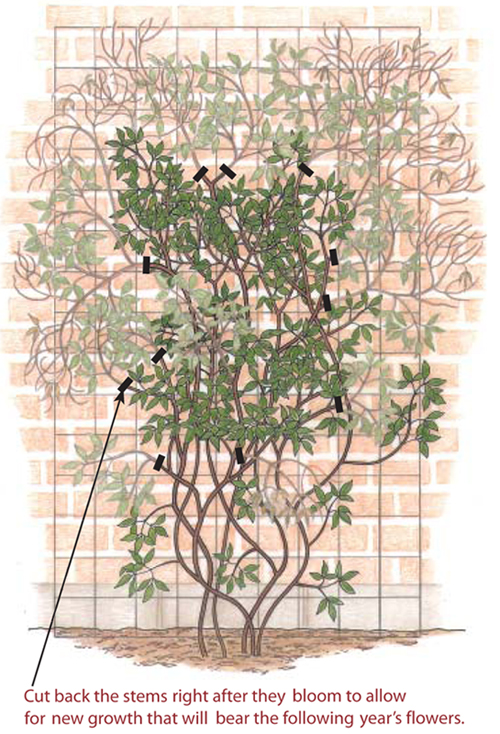 Group 1 vines flower in spring, on growth from the previous year.

Prune these vines right after they finish blooming in spring. The new stems that grow will then have enough time to make flower buds for the following year.

How much to remove when pruning depends on the vine’s vigor and how large a support you’ve provided for it. Vigorous sorts, such as varieties of C. armandii, can be cut back almost to the ground. On the other hand, very little pruning is necessary for C. alpina and C. macropetala and other slow-growing varieties.

Older portions of the stems of some of these spring bloomers, such as C. montana, are often reluctant to resprout after being cut back, so avoid cutting these plants back into very old wood, keeping in mind that the plant will get somewhat larger each year. The best thing to remember is that, no matter how you prune Group 1 plants, the new shoots that appear after pruning are the ones that will bear flowers the following season. To some degree, the less you shorten stems when pruning, the earlier the blossoms will appear.

The vines that bloom mostly on older stems have their heaviest flush of flowers in late spring, while those that bloom mostly on new shoots are more prolific in the latter part of summer.
Group 2 vines require a bit more pruning finesse than do the vines of the other groups. If you cut back these types drastically right after the first bloom, you miss out on much of the summer show; if you do so just before growth begins, you miss the spring flush.

A few approaches are effective when pruning this group. The most refined approach is to lightly thin out and disentangle stems before growth begins in late winter or early spring, and then go over the plant again after the earliest flowers fade in late spring or early summer, severely shortening the stems that bore those flowers. If the plant tends to bloom more heavily later rather than earlier in the season, you can be more heavy-handed when thinning stems before growth begins in early spring.

A simpler option when pruning Group 2 clematis vines is to severely prune the plant back by half in alternate years. Another approach is to cut the whole plant back drastically every few years just before growth begins, with little or no pruning in the intervening time; in this case, you give up only the earliest blossoms in the season you prune.

Group 3 vines flower in late summer or in fall, on new growth produced earlier in the season.
These are the easiest vines to prune. Just before the season’s growth begins, or as it is beginning, lop all stems back to strong buds within a foot or so of the ground. For me, this pruning method is especially important to keep my sweet autumn clematis (C. terniflora) from swallowing up my garage with its rampant growth and spilling the bulk of its fragrant white blossoms on the roof.

However, there is no need to cut a late-blooming clematis back so severely if you are going to let it ramble up into a tree where you want its blossoms held high. Furthermore, certain plants in this category, such as C. orientalis cultivars and C. tangutica, start blooming earlier and then continue longer if they are not cut back so hard.

If these instructions still seem confusing, the “do almost nothing” method can work with most clematis as long as you don’t mind an unmanageable vine. A drastic pruning every few years may sacrifice some blooms in the short term, but it will bring the plant to a more manageable size and, in getting rid of decrepit old stems, stimulate young replacement stems that will put more flowers at eye level.

The Many Faces of Clematis
Get to know the wide variety of flower shapes and sizes this popular vine offers.

Clematis with Everything
An avid collector uses shrubs and perennials as living trellises for these flowering vines.

The Science of Seed Starting

Seeds are little miracles that transform the world. In the wild, these tiny amalgamations of DNA can be stored away for years, waiting for the right conditions to turn a… 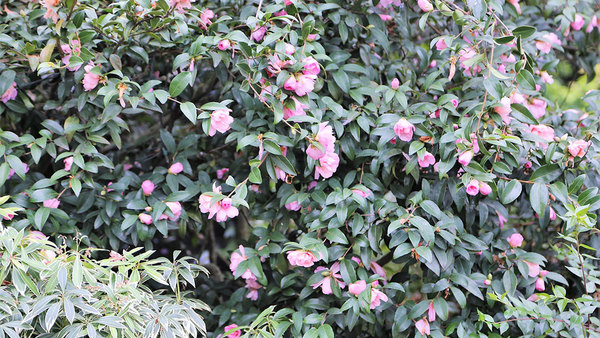 Camellias That Shine in Winter

Even during the shortest days of winter, everyone loves to see beautiful blossoms. Evergreen camellia shrubs (Camellia spp. and cvs., Zones 6–10) are tough, long-lasting plants, and their beautiful winter-blooming… 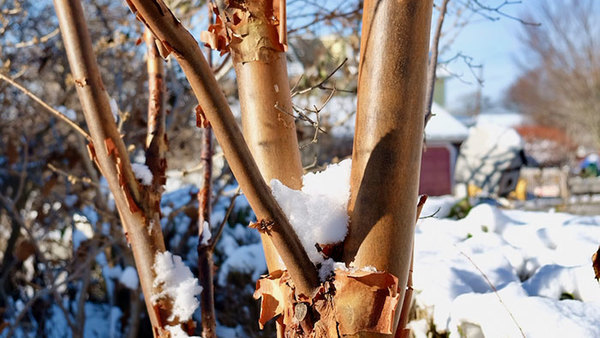 Come winter, when gardens go quiet in the Northeast, most of us become so hard up for visual stimulation that we finally get excited about tree bark. Now that our… 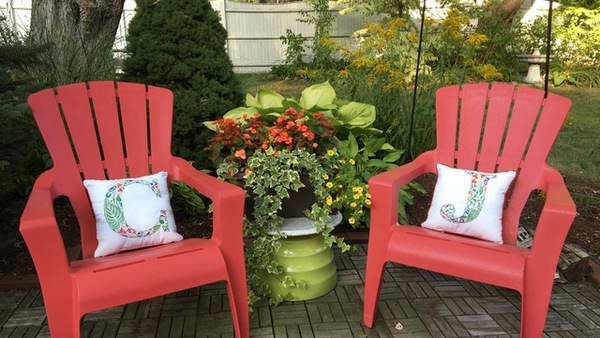 Looking Forward to Spring in Massachusetts

My name is Cindi Jacobs, and I live in Wayland, Massachusetts. I have been gardening for years and in this home since 1997. We have 12 perennial beds and one…