How to Prune Conifers

These plants are unforgiving, so make the right cuts for the right reasons

Part of the allure of conifers is that they are usually low-maintenance plants. Many conifers have evolved in regions with low rainfall, poor soil conditions, and extreme temperatures, so they are generally considered to be rugged plants; conifers, in fact, almost seem to thrive on neglect. A little periodic pruning, however, can keep your conifers healthy and looking their best. When thinking about pruning conifers—or any plant for that matter—it’s good to remember the old carpenter’s adage, “Measure twice and cut once.” In the case of conifers, it’s “Think twice and prune once.” With this in mind, there are two things would-be pruners should ask themselves before making a single cut: “Why do I want to prune this conifer?” and “Which conifer is this, anyway?” Knowing the answers to these two questions is critical so that you can determine how and when conifers should be pruned.

Back in college, my professor used to rant, “Never prune conifers without a darn good reason.” (Actually, his language was a little saltier than that.) The point is to remember that there is no place for recreational pruning of conifers because they don’t replace growth like other trees and shrubs; pruning is always done for a particular purpose.

Form
The pyramidal form many of us want from our conifers results from their strong apical dominance. This means a single leader branch dominates and suppresses the growth of other shoots. Occasionally, two or more terminal leaders may become dominant, creating a Mohawk look, or the main leader grows quickly, making the tree look like it has a rocket shooting out the top (see photo above). These conditions can make your lovely tree resemble a nondescript shrub. Extra leaders can also develop into branches that have poor attachment angles and are often the first to break in storms.

Size Control
In some ways, this is the weakest reason for pruning. If we plant the right tree in the right place, tree size should not be an issue. Almost all gardeners, however, have found themselves in the position where a tree grows faster than anticipated into other plants or buildings, and the need to keep that conifer in check arises.

Health
Removing dead, diseased, or damaged branches should be done anytime a problem pops up and can be safely corrected. Removing branches that cross and could potentially rub against each other is important because these injuries can be an entry point for disease. Limbs that appear weak because of poor attachment angles (called a narrow crotch) should also be pruned away. As the tree grows, excess bark accumulates in the crotch. This results in weakness because, over time, more bark and less wood holds the branch to the trunk.

Rehabilitation
With few exceptions, conifers will not resprout if cut all the way back to the base, unlike many deciduous trees and shrubs. It is possible, nevertheless, to rehabilitate old, unsightly conifers with some drastic and creative pruning that can result in a new, pleasing look.

Then ask what and how?

Conifers include a wide array of plant types, all with different types of needles, which all respond differently to pruning. This is due to differences in growth patterns: when the tree sets new buds, pushes new growth, or stops growing altogether. When you prune is largely dependent on these growth patterns. Here are some identification tips, timing guidelines, and pruning methods for the most common conifers.

Arborvitae
(Thuja spp. and cvs.)
Needle structure: Soft, fanlike needles form sprays along the stems. The foliage feels scalelike to the touch. There are no markings on the undersides.
When to prune: When pushing new growth in late spring or early summer.

Junipers
(Juniperus spp. and cvs.)
Needle structure: The foliage is borne on branches in sprays. It’s sometimes easiest to eliminate every other category before deciding it’s a juniper.
When to prune: When pushing new growth in late spring or early summer.

Chamaecyparis
(Chamaecyparis spp. and cvs.)
Needle structure: The sprays of foliage are similar to junipers, but many have silvery X markings on the undersides.
When to prune: When pushing new growth in late spring or early summer.

Pruning method for arborvitae, juniper, and chamaecyparis
Unlike some conifers, these trees will not form new buds on old wood. So if you cut back to the brown, aged stems, it won’t grow back. Pruning for size control, there­fore, can only be done on new growth (where the stems are still green and pliable). Snip branch tips back lightly.

Hemlocks
(Tsuga spp. and cvs.)
Needle structure: Short, flat, dark green needles are slightly stiff. The undersides of the needles have two white bands.
When to prune: When dormant in late winter or late summer.

Yews
(Taxus spp. and cvs.)
Needle structure: Short, soft needles are flat with a tapered tip and occur only on one side of the stem.
When to prune: When dormant in late winter or late summer.

Pruning method for hemlock and yew
To help shape these trees into formal hedges or to encourage fullness, lightly trim back the outermost growth using hand pruners or hedge shears. These conifers get a flush of new growth after pruning, so the best time to give them a haircut is when they are not actively growing. 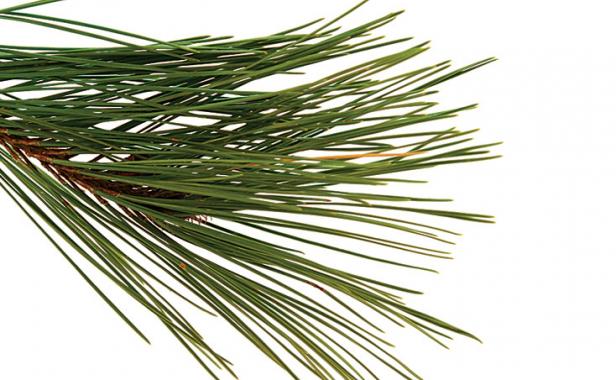 Pines
(Pinus spp. and cvs.)
Needle structure: The branches bear needles (often­times long) in groups of two, three, or five.
When to prune: When pushing new growth in late spring.

Pruning method for pine
Pines should be pruned during active shoot growth because this will allow sufficient time for the shoot to produce a new set of buds for next year’s growth. The current year’s new shoots, or “candles,” can be cut with hand pruners or simply pinched off to the desired length.

Video: How to Prune Pines

Douglas firs
(Pseudotsuga menziesii and cvs.)
Needle structure: Needles are arranged in a spiral around the stem. If you crush them in your hands, they will smell like Froot Loops.
When to prune: When dormant in late winter or late summer.

Firs
(Abies spp. and cvs.)
Needle structure: Stiff needles appear singly, up and down the branch. If you pull off a needle and roll it between your fingers, it will feel flat and won’t roll easily.
When to prune: When dormant in late winter or late summer.

Spruces
(Picea spp. and cvs.)
Needle structure: Needles are extremely sharp (it’s the deadliest Christmas tree you can pick) and are borne singly all around the stem. These four-sided needles roll easily between your fingers.
When to prune: When dormant in late winter or late summer.

Pruning method for fir, Douglas fir, and spruce
To control height, prune the leader while the trees are dormant. These conifers form buds along their stems, so make a cut half an inch or so above a bud. The topmost bud will become the new leader. This cut will also stimulate outward growth of the buds below.

Lightly trimming back the outermost branch tips during dormancy will also encourage fullness when the tree pushes new growth in spring.

Video: How to Prune Fir, Douglas Fir, and Spruce

Today we’re visiting with Maureen Budny in North Reading, Massachusetts. Maureen is an amateur photographer and has shared some of her photos with us before (A Photographer's Eye in the…

Today Eric Sternfels is taking us to visit a beautiful community-created garden in Philadelphia called Ned Wolf Park. He introduced us to this lovely garden before (A Garden Made by…