How to Grow Leeks

Rich soil, ample water, and big hills are all it takes for a luscious crop

A few years ago, when I was living in Scotland, I often wandered the quaint streets of Musselburgh, a village of Edinburgh. I especially admired a stone cottage with a pretty border of leafy blue leeks lining the paving stones from the street to the front door. But in every back garden I glimpsed, leeks were growing. Between hills of potatoes, in circles around tomatoes, and tucked among salad greens were leeks, leeks, leeks.

Imagine my joy when, seed shopping for my own tiny garden, I saw a packet of ‘Musselburgh’ leek seeds. I planted them that year and have been saving seeds for this succulent variety ever since. I brought those seeds across the Atlantic with me, only to discover the variety is available here. Some catalogs in this country call it ‘Giant Musselburgh’—and with good reason.

In this country, we pay about a dollar apiece for leeks at the grocery store, but it’s easy to grow your own for far less money. Using methods I’ve developed over the years, I enjoy an ample supply of leeks from late summer through spring.

There’s a leek for every season

Leeks are a biennial member of alliums, a tribe that includes onions, garlic, shallots, and chives. The white shank has a mild—almost sweet—onion flavor; the green tops are stronger tasting. I grow several varieties, sowing a spring crop to eat from late summer into winter and a fall crop to enjoy in spring. Leeks grow superbly in cool, rainy places. They don’t mind warmer, drier climates, though, when pampered with lots of water and thick layers of mulch to keep the soil cool and the weeds at bay.

In southern New England, I sow leeks indoors in March. The relatively quick-growing ‘Falltime’ goes in the ground mid-April and is ready to eat by August. ‘Kilima’, also started in March, matures in early fall. ‘St. Victor’ takes longer to mature but turns a lovely soft purple in cold weather and is ready for holiday soups and stews. Its color fades with extended cooking, unfortunately, but the magnificent display of ‘St. Victor’ in the garden is reason enough for growing it. 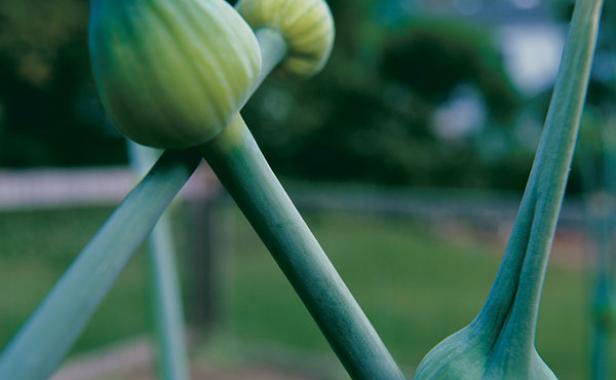 Giant Musselburgh’ makes my most superb crop of leeks. Long in the shank, firm, and a good choice for overwintering, it has acclimated itself to my garden, getting bigger and hardier every season. ‘Scotland’, with its blue color, isn’t just a pretty face but is also a hardy, short-shanked leek with, what I consider, the best texture and taste. I sow this variety in March and again in August. It, too, overwinters well.

Amend the soil and water well for large yields

I leave August-sown seeds outside, pro­tected from the noonday sun. About two weeks before setting out, I supplement their water with fish emulsion twice weekly. Leeks are ready to be set out when they’re about the thickness of a pencil lead.

Before planting, I mix the topsoil with compost plus a little sand for good drainage before placing it back in the bed. If this sounds like too much work, simply spread compost, leaf mold, or other organic matter on top of the bed and lightly fork it in. If accommodated with fertile soil and ample water, leeks will reward you with big shanks, good texture, and sweet flavor.

I plant leeks in trenches that are 6 inches deep. As the plants grow, I hill them up
every couple of weeks, piling an inch or two of soil around each plant or along the row. Hiding the shank from light blanches it, producing more of the tender white part. Watering well is important. I soak my beds twice a week. Leeks that suffer from lack of moisture grow unevenly and have a strong taste and pithy texture. Leeks are heavy feeders. Mine get a weekly gulp of an organic liquid fertilizer throughout the growing season.

For leeks to overwinter, I plant seeds in flats in August, sowing thinly to avoid transplanting before setting out. If you live in warmer climes than that of New England, you can start them through the end of September.

Certain varieties like ‘Giant Musselburgh’ and ‘Scotland’ will overwinter well; just make sure to get the seedlings in the ground before frost. I bury the transplants completely with straw or dry grass clippings. On the first really cold night, I cover the whole bed with an old sheet. Early in spring, I remove the sheet, but replace it when nighttime temperatures plunge below 30°F. When the weather warms, I remove the mulch. I’ve had small but usable leeks as early as April.

Dig and pull to harvest 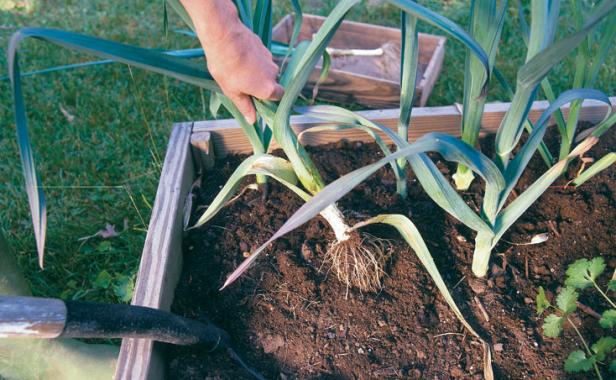 Leeks are ready to harvest when they’re large, firm, and not too bulbous at the base. A 1-inch-diameter shank is a good size for most varieties. Loosen the soil with a garden fork, lifting up the leeks. Grasp the shank and pull, then shake the leek to free it of excess soil. Rinsing with a garden hose is a good idea. Leeks hold lots of dirt.

I always leave some leeks in the garden to set seed. In their second year, each grows a lovely starburst cluster of tiny whitish flowers on a long and delicately twisted stem. Once the florets are open, it takes three to four weeks before the tiny black seeds mature. At that time, I pick one or two stalks and put them upside down in
a brown paper bag. I tie string around the neck of the bag and hang it in a cool, well-ventilated spot for about a month. Then, working over a bowl, I shake and rub the flower heads between my fingers to loosen the seeds. I pick out the seeds from the debris and store them in an airtight container.

In late winter, I still have some of the leeks I harvested the previous autumn. I store only perfect leeks; I keep them in a cool, dark cupboard in a dry, well-ventilated room. I fill boxes with an inch of damp sand, then a horizontal layer of leeks, more sand, another layer of leeks, and so on. I trim some of the tops off long leeks, but except for a thorough rinsing (with enough time to dry), I prefer to store leeks much as they are when I harvest them from the garden.

Great Native Plants for Your Region

Growing native plants is the gardening equivalent of having your cake and eating it too. Not only are these plants beautiful and more likely to thrive in your landscape, they…

Trees are critical backbones in a landscape and likely the biggest plant investment you’ll ever make because they generally have large price tags. Also, trees don’t transplant well once they’re…

It’s no secret that the tomato is a favorite summertime staple. Year after year, countless gardeners rely on this formidable and versatile fruit to mark the arrival of spring and…