How to Avoid Staking Plants

While gardening with perennials is a labor of love, I try to keep my chores to a minimum. Weeding, watering, pruning, planting—these tasks can take a good bit of time. For the most part, I don’t mind; gardening is therapeutic. One area on which I refuse to spend my precious time, however, is staking. This task not only is tedious but also creates an eyesore. There’s nothing worse than when the rhythm of a border’s color and texture is interrupted by obtrusive stakes.

Rather than relying on supports to hold up slouches, I depend on environmental tactics to keep my plants looking good and standing tall. Things like soil, spacing, light, water, and pruning practices not only influence a plant’s leaf and flower production but also have an impact on its overall stature. By being aware of how these elements play a role in my perennials’ growth and size, I have a garden that has lived virtually stake-free for years, and my plants are happier for it because they flourish in conditions that suit their needs.

A good balance of organic matter goes a long way

Perennials generally thrive in well-drained soil with some organic matter. If your soil lacks these characteristics, it’s time to amend it. I know firsthand that this is sometimes easier said than done for gardeners with challenging soil like clay, but good soil goes a long way in the garden. Clay soil is the kiss of death for many perennials because it is difficult for roots to pene­trate and holds too much water, causing roots to rot. Likewise, sandy soil can lead to a peren­nial’s demise because it supplies few nutrients and holds little water.

Plants grown in less-than-optimal soil often show signs of stress and are unable to support themselves. Some perennials prefer clay or sandy soils, so as often as possible, match the right plant to your soil type. Most perennials, however, like the good stuff, so amending your soil with organic matter, like composted cow manure, leaf mold, or compost, and a drainage-promoting component, like gravel or perlite, to a depth of at least 12 inches is the way to go. In extreme cases—if you’re gardening on rock or in hardpan, for instance—building a raised bed for perennial plantings is a good alternative. Either way, top your plantings off with a thin layer of mulch at planting time to keep roots cool and moist and plants going strong.

Unless a soil test tells you otherwise, take it easy on the fertilizer. Overfeeding encourages leggy growth, and your plants will flop and require staking. If you do need to fertilize, choose a feed that is low in nitrogen (N) and potassium (K) because these elements are responsible for pushing lots of green growth and metabolizing the nutrients. Higher phosphorus (P) is fine because it promotes desired blooms, fruit, and root growth.

Although it feeds our need for instant gratification, overplanting is another big no-no if you want your plants to perform and stay upright. Planting perennials too close together leads to leggy growth as plants search for light, air, and room to grow. Be sure to know your plants’ mature size at planting time and space them accordingly.

Likewise, the wrong lighting conditions leave perennials out of whack. It may sound like a no-brainer, but you’d be surprised how many plants I’ve seen growing in the wrong lighting. Sun lovers mistakenly placed in too much shade become weak and elongated. Before you site your perennials, take note of condition requirements on plant tags or in reference books. A little effort in research in the beginning will save you a lot of effort in staking later on.

Finally, don’t forget to consider one of the most overlooked conditions in the garden: wind. This invisible force can wreak havoc on perennials, leaving them as flat as a pancake. Avoid placing garden beds in the path of a wind alley. Wind can also create microclimates, especially on slopes. If a slope faces south or west, summer winds will wring out the soil, leaving the location dry and hot. Conversely, if the slope faces north or east, it will be sheltered from the summer winds, leaving it cool and moist for a longer period of time.

How and when you water your plants is almost as important as watering them at all. It’s better to water plants deeply with greater spans between intervals rather than shallow and often. Deep watering encourages healthy, far-reaching root growth, which stabilizes plants, gets them through dry spells, and promotes strong stems. It’s best to water in the morning hours so that plants have a chance to dry off before evening. Wet leaves at night can lead to rampant disease problems.

Avoid overwatering. In most cases, too much water causes more problems than lack of water, resulting in sloppy plants that can be top heavy, leggy, soft stemmed, or generally overgrown. Plants are weakened and become more susceptible to problems like diseases and insects when they are stressed by factors such as too much water, sun, shade, or lack of air circulation. Perennials generally need only an inch of water per week during the growing season.

Plants benefit from a little pruning

Seasonal pruning can also help get perennials back on their feet. Late bloomers and historically floppy plants like asters (Aster spp. and cvs., USDA Hardiness Zones 4–8), boltonias (Boltonia asteroides and cvs., Zones 4–8), and sedums (Sedum spp. and cvs., Zones 3–9) can be maintained at a shorter height to avoid the need for staking. Simply snip plants back by a third to a half in early summer for a shorter and bushier habit that will have little impact on the bloom. It’s also not a bad idea to stay on top of deadheading. This practice not only encourages more blooms but also promotes bushy growth; removes heavy, spent flowers; and redirects the plant’s energy back to healthy growth rather than to seed production.

Occasionally dividing your perennials is another way to avoid the need for staking. If you notice halos (a hollowing out at the center of the perennial’s crown) or splaying, it’s time to divide your perennials. This common technique rejuvenates plants and straightens their posture. Plants can be divided in early spring or early fall by lifting the crown with a garden fork, spade, or shovel. You then split the clump into two or three segments, replanting them with adequate spacing. Depending on the species, perennials generally benefit from a division every three years or so.

Following these strategies is a win-win situation for all involved. My perennials are happier and healthier, garden visitors get to enjoy a good show, and I don’t have to spend my time staking.

When all else fails…

No matter what we do, some plants, such as big-flowering peonies or lilies, are going to need to be staked. Thankfully, there are many staking options available. Just remember—it is always better to put your staking system in place too early rather than too late, when your plant is already a gangly mess.

Single stakes, such as bamboo, plastic-coated metal stakes, or even tall metal spirals, are a fairly inexpensive and easy option. Often more functional than attractive, these stakes are best camouflaged behind your plants.

Pea stakes can bring an attractive, rustic look to the garden. They’re simply forked twigs or branches stuck into the ground to prop up plants. This type of staking usually works best on plants that are no more than 2 feet tall.

Cat’s cradles are a good way to stake clumping, multistemmed perennials, although they are time-consuming to build. A cat’s cradle is constructed by placing four or more stakes around the plant and then twine (green is less noticeable) is interwoven around the stakes several inches above the plant to create a grid. The string supports the stems as they grow through the grid.

Grids are the modern-day cat’s cradles. These manufactured supports are often made of heavy-gauge wire that is coated with a green epoxy. Like the cat’s cradle, plants are supported by this system as stems grow up through the grid. Many gardeners like this method because mature plants disguise it well.

Cages and tuteurs are a good choice for taller plants and vines. Cages have a metal frame that supports the outside of the plant and is quite noticeable. Tuteurs are used the same way only they are usually made of wood and have decorative appeal.

Spring Into Summer: 6 Garden Bed Designs to Try This Year

Every garden should have something going on after spring flowers fade and before the summer show really gets going. But in some gardens, this in-between season is punctuated mainly by… 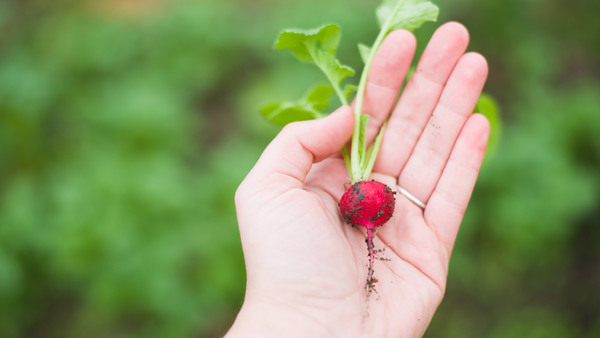 Video Series: How to Start a Vegetable Garden

Start a Vegetable Garden Spring, Summer, or Fall - now is the time to learn how to start a vegetable garden. Follow along with Fine Gardening editor, Steve Aitken, and…