Learn the dos and don'ts of creating jaw-dropping containers

As a professional container designer, I have a few customers who want the biggest and best containers on the block. They like the attention, and they love to report that people stop to gawk and sometimes take pictures. So there is considerable pressure on me to push these containers over the top.

Through the years, I’ve come up with a few strategies to do just that. With these basics under your belt, you’ll be able to design your own big, bold, showstopping containers with dazzling combos of lush leaves and bewildering flowers.

A big, explosive display requires a large container. It must have enough volume to accom­modate the roots of the plants’ ultimate size. A stunning combination can be sustained within a smaller container, but it requires constant monitoring to ensure that the container is getting enough water, fertilizer, and pruning. Without the greenest of thumbs, a pot that’s too small will almost always disappoint. At minimum, the container should accommodate a soil volume of at least half the size of the eventual volume of plants. This is important visually, as well. 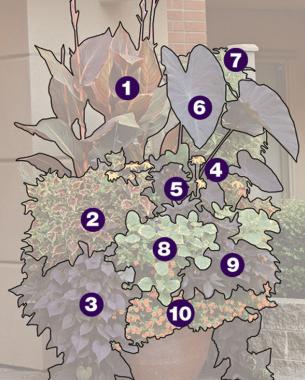 Use the rule of thirds

I almost always use the rule of thirds when designing containers. The rule is based on an aesthetically pleasing compositional proportion used in painting, photography, and design. The rule can be used in one of two ways, each one opposite from the other. Starting with the container, visualize the overall look of the planting you desire according to your plants’ eventual size. The container must take up either one-third or two-thirds of the eventual total height of the container and the plants together. And the plants must take up the remaining two-thirds or one-third, respectively, of the planting. If, for example, your pot is 2 feet tall, your plants’ eventual height can either be 1 foot tall (which would have your planter being two-thirds of the overall height of 3 feet) or 4 feet tall (which would have your container being one-third of the overall height of 6 feet). 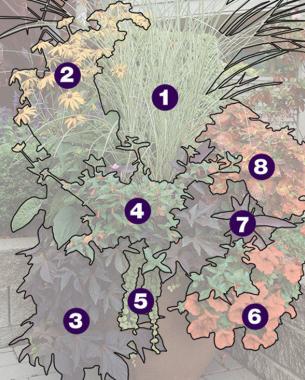 Pile in the plants

I like to cram lots of different plants into one container for a lush, abundant look. I occasionally have to yank out some poor performers throughout the season, and it’s nice to have lots of other favorites in the mix to keep the show going. But there is such a thing as too many plants.

Rather than filling the entire surface of the soil with plants when potting up your container, leave a couple of inches between each plant. This will give the plants a better chance of getting off to a good start. Adding new plants to a container later in the season doesn’t seem to work for me. The soil surface is usually full of roots, which makes it difficult for new additions to establish themselves. 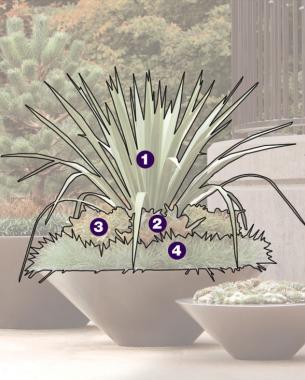 Don’t skimp on the water

A pot stuffed with lots of plants requires lots of attention. Water is often the biggest issue later in the season, once the plants become larger and more mature. A container that fully dries out one or more times during the season can take weeks to recover and, in many cases, may never reach its full potential. More important than the frequency of watering is how deeply you water. One way to ensure that you are watering thoroughly is to keep watering until water begins to drain freely out of the bottom of the container. If the soil in a container is extremely dry, however, water has a tendency to run off the surface of the soil and down the inside surface of the pot. In this case, water may be draining out of the pot, but the soil isn’t truly getting wet, and you’ll need to take special care to wet the soil thoroughly. Keep in mind that freshly planted containers use far less water than containers in the peak of summer. So adjust your watering habits to compensate for increased heat and plant sizes. 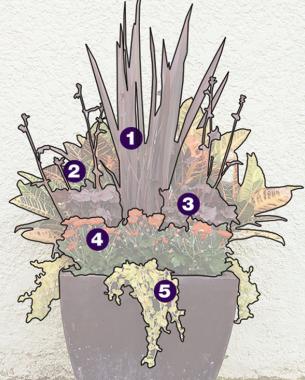 Achieving showstopping containers is impossible using water alone. Fertilizing is every bit as important as watering, espe­cially in the limited root space of a con­tainer. Once the fertilizer has been used up, the roots have nowhere else to get it, unlike garden-dwelling plants. The most foolproof method of fertilizing is to use a slow-release granular fertilizer. Make sure to read the instructions on the package to avoid using too much. If the plants need a boost during the season, you can apply an appropriate liquid fertilizer. It’s often necessary to add a few applications of liquid fertilizer, especially in tightly planted containers. You only have the one season to get every­thing you can get out of your planters, so make it count!

How to pot up a lush container

1. Cover the drainage holes with a mesh screen to prevent them from clogging and to keep soil from washing through onto your patio or deck.

2. Fill the pot with soil up to a few inches from the top using a top-quality, all-purpose potting mix. This will leave room for the bulk of your plants’ existing root-balls and soil. Add more soil if your plants are in small nursery pots.

3. Add slow-release fertilizer to the top of the soil. Using your fingers or a trowel, thoroughly and evenly work the fertilizer into the soil to a depth of 6 to 8 inches. Pack the soil and fertilizer mixture gently into the container with your hands, making sure there are no voids.

4. Plant large plants first, adding smaller plants as you move out toward the edges of the pot. Fill in with soil as you go, making sure not to cover the tops of the roots with more than half an inch of soil.

5. Water the container slowly, with your sprayer set to a gentle shower, for up to 10 minutes to allow the new soil to absorb the water properly. You can stop watering when the water is flowing freely out of the container’s drainage holes.

Todd Holloway is a container designer in Van­couver, British Columbia, and owner of Pot, Inc.

Photos, except where noted: Todd Holloway