A Different Approach to Crop Rotation

Whether your garden is big or small, focusing on plant families results in better resistance to pests and diseases

If you grew carrots, tomatoes, and beans this year, you’ll want to add a reminder to your to-do list next spring: Rotate. Crop rotation is a practice whereby gardeners plan space so that the same or related vegetables are not grown in the same location year after year. Growing crops in the same spot every year is akin to playing a plant form of Russian roulette and might result in an increase in pests and diseases. Conversely, proper rotation can be an effective pest- and disease-management tool.

The most common method of crop rotation proposes that leafy crops, root crops, fruiting crops, and legumes be planted together. This approach is based on the theory that these groups each have the same soil needs. In addition to that not being necessarily true, soil-nutrient needs are better handled by amending soil annually with compost, well-rotted manure, and organic fertilizers and by the use of cover crops.

A better approach to crop rotation considers botanical plant families. Many pests and diseases are plant host–specific, meaning that plants in the same family tend to be susceptible to many of the same pests and diseases. If, for example, tomatoes are infected by anthrac­nose (a fungus) during one season, chances are that tomatoes, peppers, or eggplant planted in the same spot the following year will be infected; that’s because anthracnose can overwinter in soil and on infected plant debris. Such a fungus can survive in soil for at least one year and sometimes as long as three years. Rotating by plant families for three to four years can help keep fungal populations in check. Other vegetable-crop diseases that persist in soil include early blight of potatoes and tomatoes, root-rot fungi of legumes, and fusarium wilt of cucurbits.

Crop rotation can also help reduce the buildup of insects. These are pests that overwinter in garden soils either in an adult form or as eggs, larvae, or pupae. The most common of these pests are grubs, wireworms, and maggots. Rotating crops by family reduces the opportunity for these insects to infect a host-specific plant.

Many pests and diseases are plant host–specific, meaning that they are attracted to the same plants or plant families. To properly rotate crops, you need to understand the various plant families:

Crop rotation is practical for small gardens and raised beds

While crop rotation is particularly effective for managing pests and diseases in large-scale agricultural systems, it is also effective in smaller spaces. In home gardens, it is important to keep the system simple and pay attention to plant selection. We recommend growing vegetables that are space efficient—that is, those that have a high and continuous yield. The most space-efficient crops are tomato, pepper, cucumber, pole bean, and cut-and-come-again greens. Bush varieties of vine crops as well as short-season crops that produce multiple harvests are good choices. Eliminate potato, sweet corn, and many rambling-vine crops. Because of space limitations, select only a few vegetables and employ methods such as vertical gardening on trellises.

Sketch a simple planting scheme, and keep a journal

Once you have selected crops, sketch a planting scheme. With a 100-square-foot garden, divide the space into four quadrants, and grow crops in a four-year rotation. Plant, for example, lettuce, tomato, and related vegetables in Quadrant 1; radish and bush squash in Quadrant 2; carrot in Quadrant 3; and bush bean in Quadrant 4. Each year, advance the planting one quadrant in a clock­wise direction. Use a notebook to document crops and locations, and include any pest or disease problems associated with the crops in each quadrant. Keeping detailed notes will help when refining future crop-rotation schemes.

Space is even more limited in raised beds. A common raised bed is roughly 8 feet long and 4 feet wide. To make sure that crops are not grown in the same plot in consecutive years, partition the beds. Our own raised beds were constructed with dividers so that the large beds contain four mini beds, which are each 4 feet long and 2 feet wide. These smaller beds limit the crops we grow but still allow us to rotate crops on a four-year cycle. Another reason to partition a raised bed is to isolate the soil in each quadrant. Proximity can encourage diseases, especially soil-borne ones, and isolating soil can help. Another step to prevent the spread of diseases is to cover soil with a mulch to keep the soil from splashing onto plants in adjacent quadrants.

Most gardeners have been plagued at least one year with pests or diseases—and sometimes both. While crop rotation by plant families might not entirely deter pests or prevent diseases, it does ensure that neither will become a chronic problem. •

If the soil is partitioned, a bed that is 8 feet long and 4 feet wide can sustain a crop-rotation plan like the one at right. Working in a small garden means that you might have to employ succession planting during a single growing season and make practical choices about what to grow. (Corn and sweet potato are out.) Fortunately, seed purveyors are continually coming out with new varie­ties for small spaces.

After the first growing season, remove crop residues. Be especially vigilant about removing any diseased plant material. Healthy bush-bean remnants can be left to decompose and chopped up into the quadrant in which they were grown to return nitrogen to the soil. During the second year, rotate crops by one section—that is, Quadrant 1 plantings will go into Quadrant 2, and so on. By the fourth growing season, plants in Quadrant 1 will be in Quadrant 4. 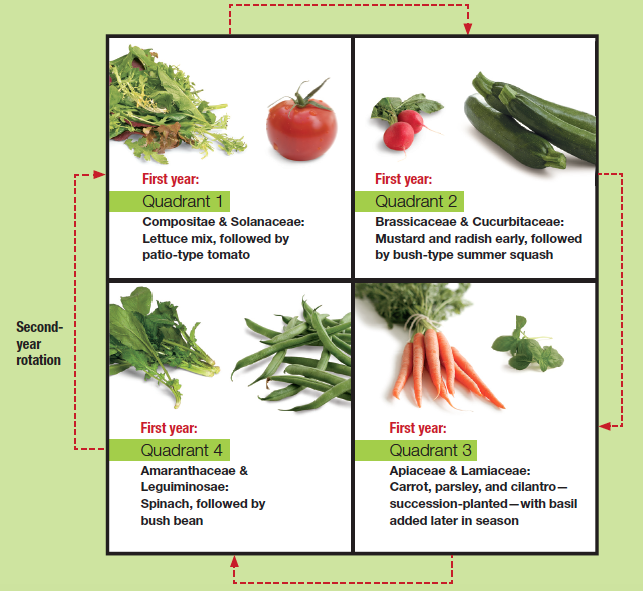 Father-and-daughter team Ron and Jennifer Kujawski are the authors of the Week-by-Week Vegetable Gardener’s Handbook. They tend a 8,000-square-foot vegetable garden and multiple raised beds in western Massachusetts.

Many modern landscapes are small. The amount of space we have to garden is shrinking as people want the blend of suburban life along with the conveniences of city living.…

How to Make a Sustainable Hypertufa Container

This video shows how to make a sustainable hypertufa container. These troughs are typically molded using a mixture of portland cement, perlite, and peat moss, but in this tutorial, I'll…

Most insects raise no concern when spotted in the garden. In fact, many are welcome guests that we invite with an array of plants they love to visit. But we…